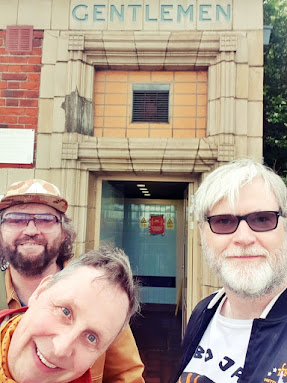 It's a double dollop of doings as we celebrate 12 years *gulp* of Podrophenia...
Part one is a pop quiz with tunes fitted around a mystery theme - who'll be first to crack the clues and unravel the reveal!
DL here
Part two - Buckle up and behold as Billy Reeves day-trips to Rossi's in Southend for a seaside meet with Piley and Mondo, wherein he tries an out-size custard tart - and relays inspirational tales of how his latest project The Helicopter of the Holy Ghost came to be. An incredible story of an amazing album of beautiful songs.. as featured in The Guardian here... 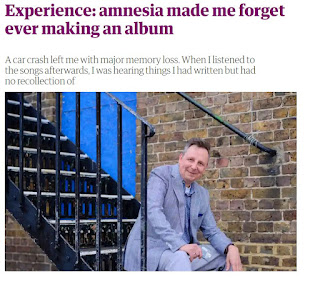 Along the way we learn about the early days of The Darkness, how Billy hooked up with Sophie Ellis-Bextor, why did the Primals move to Brighton - which band made him a coma tape - how many times is he in the Guinness Book of Hit Singles - and why the parakeets on TheHOTHG album cover? Musically we spin in a playlist of Brother Reeves' greatest hits, highlights and THOTHG tracks
DL here
Posted by Mondo at 11:35 AM

Congrats on 12 years. The next dozen will have passed before you know it.

i am giving this testimony cos l am happy My name is Mrs. Santana Valdez from Houston,taxes.i never believed in love spells or magic until i met this spell caster once. when i went to Canada in June 28th 2021 this year on a business summit. i meet a man called Dr Zuma zuk.He is powerful he could help you cast a spells to bring back my love's gone, misbehaving lover looking for some one to love you, bring back lost money and magic money spell or spell for a good job. i'm now happy & a living testimony cos the man i had wanted to marry left me 3 weeks before our wedding and my life was upside down cos our relationship has been on for 2 years. i really loved him, but his mother was against me and he had no good paying job. so when i met this spell caster, i told him what happened and explained the situation of things to him.. at first i was undecided, skeptical and doubtful, but i just gave it a try. and in 6 days when i returned to taxes, my boyfriend (is now my husband ) he called me by himself and came to me apologizing that everything had been settled with his mom and family and he got a new job interview so we should get married..i didn't believe it cos the spell caster only asked for my name and my boyfriends name and all i wanted him to do. well we are happily married now and we are expecting our little kid, and my husband also got a new job and our lives became much better. in case anyone needs the spell caster for some help, email address spiritualherbalisthealing@gmail.com Great Zuma zuk i thank you very much thank you in 1000000 times.. if not you i would have been losted and wasted thank you. Email Him Through his email address... spiritualherbalisthealing@gmail.com please make sure you contact him for any financial difficulties okay...What a powerful man such as Dr Zuma zuk.. he is so much powerful..\\ email him for any difficulties.. spiritualherbalisthealing@gmail.com His whatsapp +15068001647

After being in relationship with Wilson for seven years,he broke up with me, I did everything possible to bring him back but all was in vain, I wanted him back so much because of the love I have for him, I begged him with everything, I made promises but he refused. I explained my problem to someone online and she suggested that I should contact a spell caster that could help me cast a spell to bring him back but I am the type that don’t believed in spell, I had no choice than to try it, I meant a spell caster called Dr Zuma zuk and I email him, and he told me there was no problem that everything will be okay before three days, that my ex will return to me before three days, he cast the spell and surprisingly in the second day, it was around 4pm. My ex called me, I was so surprised, I answered the call and all he said was that he was so sorry for everything that happened, that he wanted me to return to him, that he loves me so much. I was so happy and went to him, that was how we started living together happily again. Since then, I have made promise that anybody I know that have a relationship problem, I would be of help to such person by referring him or her to the only real and powerful spell caster who helped me with my own problem and who is different from all the fake ones out there. Anybody could need the help of the spell caster, his email: spiritualherbalisthealing@gmail.com or WhatsApp him +15068001647 blog: spiritualherbal.blogspot.com you can email him if you need his assistance in your relationship or anything. CONTACT HIM NOW FOR SOLUTION TO ALL YOUR PROBLEMS