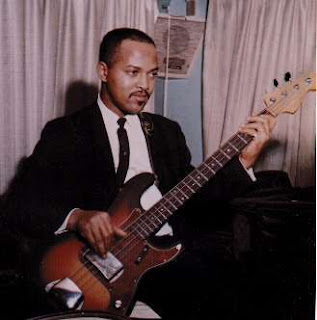 After seeing how many downloads the Merry Clayton track received (almost as popular as Los Punkrockers). I’m going to sprinkle some sparkle over Fridays by sharing a few funky nuggets on the Blog.

James Jamerson – Fever In The Funkhouse.mp3


So, who's James Jamerson? Well he's not the shouty, cigar chomping editor from Spider-Man. But the bass playing virtuoso with Motown’s in-house band, The Funk Brothers  - a band who heard on more number one's than Elvis,The Beatles,The Beach Boys and The Rolling Stones combined.

James Jamerson was (he died in 1983) one of those rare talents that crackle with natural ability and genius.

And like all genuine geniuses the usual rules don't apply. He rarely changed the strings on his bass "The Funk Machine", its neck was notoriously bowed with a crazy high action between the strings and the fret board. He didn’t rake the strings (the standard spider like hand movements bass players employ). Instead - and possibly from his beginnings as an upright bass player - just used his index finger, which he nicknamed "The Hook",

Try re-listening to I was Made To Love Her, Bernadette, or What's Going On to hear this Funk Brother bounce around the Fretboard

Fever in The Funkhouse is James Jamerson's own composition and is still unreleased
Posted by Mondo at 10:23 PM

I still prefer Carol Kaye though.

Good for people to know.

Jamerson used his index finger, aka "hook" AND he raked the strings. Raking is striking a string, followed by striking the next adjacent lower string with the same finger. Jamerson used the "rake" technique extensively.