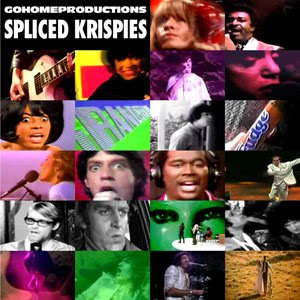 For as long as DJs and remixers have been recycling rock, rap and pop scraps into home made hybrids and patchwork tracks - I've been collecting them.

The King of cut and paste pop is Mark Vidler/Go Home Productions (the legendary 'Ray Of Gob' and 'Can't Get Blue Monday Out of My Head' are both GHP creations ) whose brand new booties 'Spliced Krispies' have been rocking my noggin for the past two weeks. And as if he's not busy enough making mashups and a full set accompanying videos, Radio One appearances, magazine features, podcasts guest spots and a new album - the Grand Master of Mashups himself Mr Mark Vidler is here, right here to give us some exclusive snap, crackle and pop on a selection from his latest tasty treats 'Spliced Krispies' -

"Wouldn't It Be Nice To Have A Finger Of Fudge"

OK, I was born in the original Summer Of Love (not the attempted ecstacy-fuelled 80's version), pre-Pepper by a month yet the smell of Strawberry Fields was still strong, if you get my drift. So...that means I grew up in the Seventies:

The Cadbury's Fudge jingle / TV ad appeared at the tail end of the 70's and well into the 80's, so if you're of a certain age you'll either remember it fondly or dismiss it for being a mild irritant. I guess I'm somewhere between the two camps but back in April when I started creating the "Spliced Krispies" album, I always knew I was going to 'doctor' it in some way. It's light and breezy feel (mostly a capella) and school boy charm was just crying out to be bastardised with something from another universe (in musical terms).

Fact 1: Mike D'Arbo (formerly of Manfred Mann) wrote the jingle.
Fact 2: I originally matched it up with Nirvana's "Teen Spirit".

Thank God I didn't stick with that idea though. It's one of those 'For every 5 gems, there's 50 shit ones' scenarios. So I continued trying to find Fudge a partner well into the wee small hours, fuelled by a bottle of Columbian Gallo and roast chicken (Hong Kong style), until Pet Sounds came calling from the corner of the room. It was purely accidental If I'm brutally honest. I was listening to 'Let's Go Away For A While' earlier in the week, so the CD was close to hand. "Wouldn't It Be Nice" seemed to good to be true. One of those 'goosebump' moments when I could hear that Fudge worked effortlessly with it...

I guess it's the one track that's getting the most attention since releasing "Spliced Krispies" to an unexpectant public in May. Chris Moyles (Radio 1 DJ) picked and played it 3 times on his breakfast show. Fair play, he gave 'The Vidler' and 'Go Home Productions' website a very massive plug, questioning my sanity for even contemplating the 2 songs together yet describing it as genius. The phone was hardly on it's hook that morning.
Funny what a 'finger of fudge' can actually do for you...

GHP - "Wouldn't It Be Nice To Have A Finger Of Fudge"

Throughout March this year I was aquiring and listening to a hell of a lot of KPM Library Music, probably fuelled by my sudden 'trying to reclaim my youth' mood that was taking me back to the Seventies, so I was consuming a lot of Alan Hawkshaw, Keith Mansfield, Brian Bennett etc and dragging out my Blow Up compilation CD's, DeWolfe comps and TV Themes albums. I felt like I was living out an episode of every BBC / ITV production between 1973-1979. Very weird but very enjoyable at the same time, so it was hardly suprising that something would filter through and end up on the album. The full Grandstand theme is quite simply a work of art. It's probably Keith Mansfields' most well known. The addition of the Supremes is probably not too much of a surprise really. I think the surprise lies in how well the vocal fits
with the backing track at certain changes. It took a bit of editing and shuffling around but I think that my decision to leave the song length the same as the opening titles was right. In the end it was probably more a case of making the music to fit the video that I was creating at the same time. Funnily enough Moyles played this track on his Breakfast show as well...

"Finally, Did You No Wrong'"

I can't leave the Sex Pistols alone.They are my regular fix of energy and attitude, reference point and inspiration. See, I was too young to be a punk in 1976/1977. I was only nine years old and more into supporting my beloved Arsenal and playing with my Six Million Dollar Man doll than following bands or pop stars. I watched Top Of The Pops from a very early age (apparently) but never went out and bought records until I was 12. I can remember Gary Glitter, Slade, The Sweet, Suzy Quatro, The Bay City Rollers, Osmonds and T.Rex but I never indulged in the sacred plastic. Those bands seemed a bit cabaret to me at the time if I'm honest. Anyway, I witnessed the Pistols on the Grundy show and that definitely left an impression. Janet Street Porter's 'Punk' documentary for the London Weekend Show was another slice of legendary TV that I caught as well, but it wasn't until 1979 that I jumped right in and started buying the stuff.

By then the Pistols had run their course and the new wave was settling in but I bought 'Never Mind The Bollocks' and am still amazed to this day by it's awesome production and energy. It's the best album to put on when the sun is out and the windows are open. It's pretty well known that "Ray Of Gob" (Pistols vs Madonna) gave me the foot-up into the Music biz back in 2003, so I just felt like doing another one for a laugh and see what turned up. This one came about pretty quickly. In fact the video took longer to make because I spent so much time watching all my Pistols DVD's for source material...I mentioned elsewhere that I had to bolster the bottom end by playing the bass part and mixing it back in but I think the track works well enough now and it's quite strange how nicely female vox fit with a Pistols song.

I'm sending out extra special soul salute to Mark for finding the time rustle up with a great bowlful of goodies of for my blog - so please speed on over to Go Home Productions and fill your boots with his boots.. 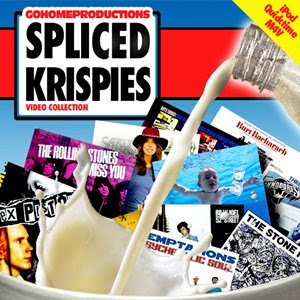 If only I had the tech knowledge to do that to the vintage adverts I play in among my records on the radio!
Very interesting post, my fave is the CC Peniston one (of course).

I'd love to make a mashup using either 'The Self Preservation Society' or 'Theme From The Liver Birds' but wouldn't have a clue where to start.

CC Peniston is my pick of the pops too, but I do love the Stones/Carly Simon one as well

And did you ever hear the GHP U2/Yazoo or Christina Ag'/Velvet Underground ones - genius!

I've never been really into the idea of mash-ups but I have to say that these are pretty ace, especially the Ce Ce Peniston track. Going to check out that Stones one now...

Great post and one that is currently close to my heart because like both Roman Empress and Planet Mondo, I too would like to do a bit of simple mashing but have no idea how to go about it. Therfore, I would like to offer the services of my own humble little blog to anybody that would care to produce a 'how to' or a 'beginners guide' to mashing up. I am happy to post this guide in as many parts as it takes to do the subject justice, and if anybody is keen to show off their skills, I'd be most happy to accomodate them. Just email me through my site.

Once again, a great post. Mondo hinted that he had something a bit special up his sleeve. Nice one Cyril - oops! there goes that 70's vibe again.

Cocktails - Here's a couple of links to start you off, It's mainly GHP and Soundhog that have made most of the really bootylicous nuggets.

Axe - I think the trick is something to do with 'reverse engineering'. I use Ableton for mixing and I'm pretty sure this could do it. Perhaps there's a tutorial on youtube?

Another great coup Mondo! Like yourself i'm a long time GHP fan, and was completely bowled over with 'Ray of Gob' (5 years ago???! how scary is that!) a real revelation, and now he's done it again!

As a massive Pistols fan I love a quality booty using their stuff. Maybe it's because they recorded so little stuff - all of which I love, but in reality their aint much of it - these booties almost seem to extend the Pistols catalogue, giving us new a new slant on their work.

P - Did you ever get the GHP Pistol Whipped? A collection of Pistols based booties. Most of the goodies are online for download here...