From Punk To Present 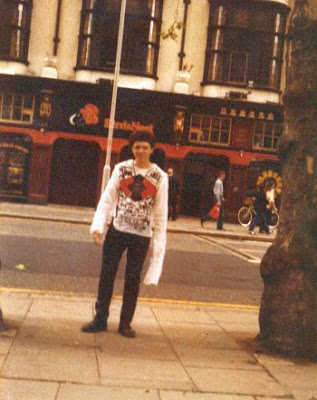 And this is me! Summer 1980 (aged 14) on my first shopping trip to King's Road, Chelsea - wearing my 'just been bought' Anarchist Gang shirt.*.

I can carbon date exactly when I bought my first Sex Pistols single - Tuesday 27th February 1979 - a group of us had spent the morning clustering around Kelleys Records in Hadleigh waiting for the Tuesday new singles delivery which included the Pistols 'Something Else' - not a classic by any stretch, but the anticipation of owning my first piece of 'as it happens' punky shrapnel (with the added bonus of some explosive effing and jeffing on the b-side) still had me giddy headed and punk drunk.

Rewind a few months and I'd had no interest in snotty, shouty, sweary spiky tops until an earful from a friend's older brother's - it's always the older brother - copy of NMTB got me switched on and tuned in to the 'now wave' of punk, with its high speed rage and rush mirroring my own hormonal hi-jinks. Hearing the Pistols properly for the first time, on a pair of Easter egg sized headphones, was a sonic seismic shift which exploded in a brain frying Everything You Know Is Wrong moment:I cut my hair, changed the way I dressed (and didn't care what anyone thought) wanted to learn guitar and start ripping out those Sex Pistols riffs. Starsky was out Sid Vicous was in, and I signed on the studded line committed to slowly becoming a teeny punk.

'Something Else' was followed up with regular record buying bus trips to southend's John Peel and punk friendly shops - Kelleys, Golden Disc, Parrot but never Projection (which was all trendy-teacher types, thirty something ex hippies in hessian jackets, corduroys, Kickers or cowboy boots) - for The Damned, Dead Kennedys, The Undertones, Crass, UK Subs and one-off wonders like The Satellites, The Victim, Honey Bane and Magic Michael.

By 1980 it was punk pilgrimages to SW3 and the King's Road - with mum and dad -for punky togs . One year later and it was The Damned's 5th Anniversay gig with A. N. Other friend chaperoned by his older brother (see what I mean?)

So, cue shots of fly away calendar pages and fast forward to today as I hold in my hand two pieces of paper that have got me as clucked up as Charley Bucket (now there's a proto punk name) unwrapping Willy Wonka's choco' bar and finding that glint of gold.

Yes. It's tickets to the Sex pistols. Tonight. At Hammersmith Apollo. Piley'll be there, and I'll be hoofing along with Tronik the boy wonder.I haven't been this giddy and punk drunk since that misty Tuesday morning outside Kelleys Records in 1979. 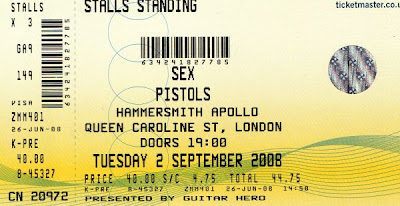 Hopefully there'll be plenty of this on the menu.

*I bought three tops from BOY (Seditionaries was being refitted as Worlds End) on this visit. Two cheesecloths - God Save The Queen and Anarchist Gang (pictured)- plus a Vive Le Rock black tee, which circumstantial evidence suggests at this point in 1980, were possibly Seditionaries over-stocks being sold off at BOY - but unfortunately all were dropped in the bin yonks ago.
Posted by Mondo at 9:29 AM

Punk didn't wash up in our town for another 18 months or so by which time it was all mohicans and leather jackets they looked dead scary though! after that it was all Mods....

Oh my. I shall wait with great interest for your gig review.

Great photo, by the way. I recognise the location. I used to have a holiday job selling earrings in the Great Gear Market. I've never been anywhere else which had such an evocative smell. Hairspray, poppers and sweat. Happy days.

I know this isn't punk, but "I got you a present."

ahhhh bless. in the frozen north we just about managed slightly messy hair and drainpipes and still got chased all over town. the kingsroad and thrilling london seemed like another world millions of miles away somehow. but we did our best.
blow a kiss to johnny for me
x

If they tour again (and I'm sure they will), you've gots to get along - stunning.

BL - know exactly the types you mean, probably similar to the Scottish squat dwellers that stopped me in the doorway of BOY on my first visit and threatened to search my pockets for everything I had if I didn't give them a quid.

IS - It's the square where a bomb landed during the second world war. I loved the Great Gear Market - and was a regular there. Rusty Egan's record shop in a Cage , Tik and Toks togs shop, and that Leather shop and Antenna Hairdressers at the back - probably won't be doing a review but will be posting some pics later today.

J - you're a star where did you dig out that funky nugget?

Ally - pics should be up later today, Johnny's so close in some, you can blow him a kiss yourself.

The track is one the soul comp I talk about in my most recent blog entry. It's a 2 disc set, and disc 1 is particularly good.

When did you have the arm shortening operation then?

I'd only had it literally about 5 mins and wasn't sure if the clips were meant to clipped or unclipped. Whoops.

I've got a photo of me, Rob Chapman and Paul Tunks (on one of his first trips to Crocs) and I'm wearing the the Vive Le Rock T, that I'd bought on this same shopping trip. If I can dig out, I'll mail you via facebook.

Just stopping by again on your mondo planet today to see what all I missed after nailing the AIT UK demo yesterday. Love these true confessions, and I can't believe that '80 snap! Takes me back. But I must tell you that the punks of '76 (excepting myself, of course) used to beat up kids that looked like that! Especially in Chelsea, I'm sure.

I also enjoyed your subsequent review of the survivors in concert. I regret reading that you missed experiencing the original lot of them in their prime. They were truly awful and awesome at the same time. Guess that's why I like that demo.

DD I was a Southender not a Chelsea kid, which is why I probably got hassled by a couple of squat living Scotch punks in the doorway of Boy on my first visit.

You saw the Pistols where, when - that's got to be your first blog bit.

Keep on digging around my ol' blog, there's plenty of punky nuggets hidden away.

Thanks, PM. Am digging. Where and when is an interesting albeit slightly long story of those heady times 31 years ago. Email me if you want to hear the story. Or rather read it. I'm never going to start my own blog. If I did, my family would kill me.