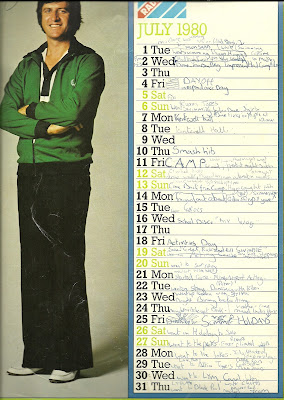 It's holidays a go-go for July. A school camping trip to Danbury, where Dave Wright and I were wedged cat/fire brigade style up a tree while the school bus was rumbling its engines,  readying to head home.

Off to Surrey for and Auntie Sylv and Uncle Wally's, as I'd signed up for week long drama course in Leatherhead. I'd mentally doodled with the idea of becoming an actor at the time - but was plainly so shoulder-cringingly shy, it was never going to happen. Bless mum and dad for indulging me with a week to find out though. The week's group was an eccentric collective, mostly pooled from bored broker wives in velour tracksuits or soon-to-be-Sloane Ranger types. Except Eileen (22nd)- who looked like Oliver Cromwell in a tutu.

Keeping with the theme of theatrics, and amost as a  reprise of last month's Johnny Rotten run-out, was my improv school disco rendition of Sid Vicous doing My Way (16th). I'd slipped my copy of the single to the metalwork teacher turned DJ, and became so fired up when the slow-groaning opening notes came into play - I was off, miming Sid's gangly moves to the tune. It went down a treat. Spontaneous applause from the disco teens and pats on the back from pals. Even the RE tutor bought me a celebratory orange squash..

Next stop, Sale in Cheshire (never say 'in Manchester') for a week parked up with Uncle Les and Auntie Jean.  A run on the Corkscrew and terrifying dad by shaking our cable car during its slow-dragging, dangle-of-doom across the Alton Towers estate were trip highlights. All this and Blackpool too

A bit thin on records bagged this month though. Just Charlie Harper's (he of the UK Subs) solo single on snot-green vinyl.. Seen in Swindle-vision at Southend's Odeon on the 19th - would you believe 31 years later, I'm nipping to our Rock 'n' Roll local to catch Tenpole Tudor in action this Saturday..

Ah, the old Sale -Cheshire or Manchester debate. M postcode, 0161 dialing code, south of the Mersey (historic boundary of Cheshire/Lancashire). I've lived in various parts of Manc and ended up in Sale, which I think of as part of MCR rather than Cheshire. Opinion round here is split...

My aunt and uncle always called it Cheshire, I mentioned this to a Manc years later, that they lived in 'Sale, Cheshire'. He fell about laughing - saying it was Manchester, but the Sale-dwellers would usually posh it up to Chesire

How can someone who claims to be too shy to act, do such a good Sid Vicious impression?!

And come on, don't you find Sid's My Way just a little bit excruciating these days?

I too toyed with acting, but after a few weeks at a Saturday morning drama school where all we did was poetry and worked on our diction I became disillusioned and quit. For good.

That's the thing- those that want to 'posh it up' say Cheshire. To everyone else it's a somewhat dull suburb of south Manchester. Ask Squire and Brown...

I was swept away with the giddy rush of the moment with the Sid thing - and could sort of hide behind the impression. I didn't sing though- just mimed it..

A week with this bunch in Surrey, put a full stop on it for me too John

I'm with Cocktails on the Sid Vicious 'My Way'. He's always looked to me like an annoying kid at a wedding reception who's had too much Pepsi.

The next year we all togged up as Clint Eastwood ie: used our camping blankets as ponchos - and ran around in the woods at night. I've got pictures somewhere...

Yes the novelty of Sid wore off a long time ago. I just feel sorry for him now, especially after reading this. And I must get around to seeing this one day - some heavy-hitters in the line-up