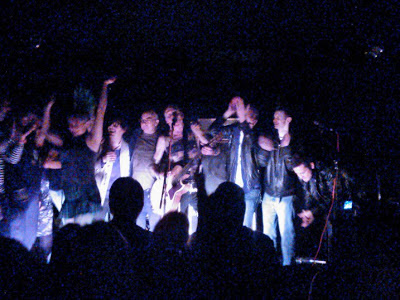 Phew - we've had some properly rocking nights at Southend's Railway Hotel - but last Friday's three rounds rapid raised the roof to an all new altitude. 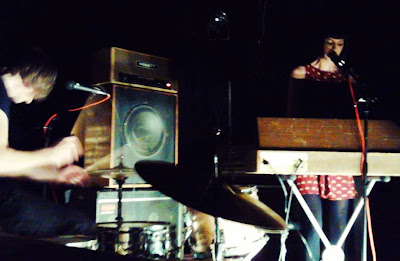 Round 1: The Tuppenny Bunters - swapping instruments, but sharing the same hairdo (and continuing the Brian/Anita, Mick/Bianca, David/Angie matched pair tradition) - ram-raided through covers: Wuthering Heights, Pop Goes the Weasel -  and originals, with crashing drums and gnarly  growling keys, at a pace not unlike a 33 played at 45 (or 78 for some gallops). 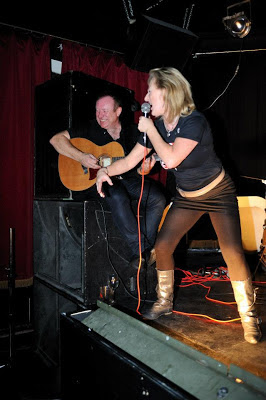 Round 2: Dick York and his infectious, ear-worming, catchy originals - Could it Be has been rocking my noggin all week long - and what's this! Behold: an improv appearance from Mrs Dick for some punk poetry, 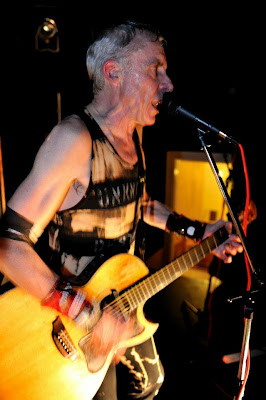 Round 3: TV Smith took to the stage just nudging near midnight - to a heightened, heated, gathering - powering through a sweaty, solo set of self-penned material.

Watching him working his guitar as weapon of trash destruction is almost Woody Guthrie-ish with the unrelenting acoustic attack and clench-fisted strumming. So wired, fired and inspired were the gathered masses - we even managed a stage a invasion of Southenders United for TV's final song... The Good Times Are Back.

This was our third Retro-Podro team up (and second with the Southend Southend Punk). And a  huge salute is due to TV Smith, Dick York, Fi and Dave Dulake, Steve Worral, Steve Pegrum, Piley, Hannah at the Evening Echo and all our Southend and out-of-towner pals who made the evening such a runaway rumpus
Posted by Mondo at 10:00 AM