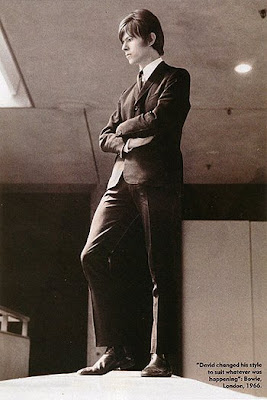 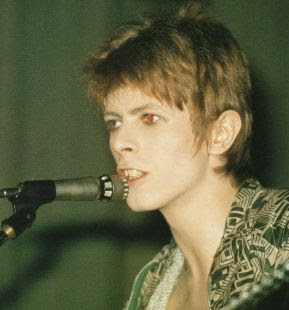 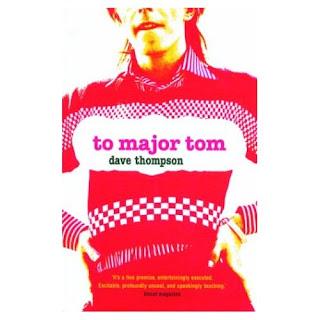 Every new Funky Friday installment raises the bar, and I wonder how long it will be before I suffer an overdose of music blogging majesty.

I must acknowledge dear Mond that the phrase 'lipstick-brickie chic' is worth a plaudit on its own. Are they putting something in the water over at yours?

Great little piece. I'm no stranger to these tunes obviously; I think I've posted can't help thinking about three times this year, if you include the Purple Hearts version. One of my all time favourite songs, certainly my favourite Bowie tune. Absolutely classic mod pop!

Thanks all, I'm off with a touch of flu pour homme at the mo' so your comments are a great comfort.

This bit could have easily been three times as long with some of the nuggets I've dug out inspired by 'To Major Tom', and other Bowie books I've been tearing through while in my sick bed (but expect to see them at some point)..The Visconti bio's due for delivery today, which has to be the follow on read to a Bowie book doesn't it.

The Visconti book is pretty good; I bought that for a friend of mine who is a huge Bowie fan on his birthday last year. Worth a read, if only as a companion piece to anything else on Bowie.

Oh I can see that you have 'plunged' regarding Bowie!!!

Wow! This was awesome. I loved it. I've always been a big fan of the mod scene. The fashion, the music, etc. were so cool. Bowie is one of my gods. I've loved his music since I can remember. Great tunes you posted. It's definitely good to be on a Bowie kick. I might have to break out my Bowie albums and give them a listen this weekend. Hope you're feeling better. Have a great weekend.

Simon - I'm on real buzz for it, as sometimes the official or unofficial Bowie books (and I've read most of them), tend to be too reverential or sensational - sometimes it's the offstage takes that are most revealing - a bit like 77 Sulphate Strip was to punk.

Col, Keith - always been a big Bowie fan, but I sort of drifted off for a bit - The Major Tom book has jump started me into it again - and after a few years of not playing the classic period material - it sounds better/fresher than ever..

I haven't listened to Bowie for years. For some reason he just slipped off my radar. These however are great. I love the Tony Newley like vocals. A great mod classic.

Fantastic flu-ridden writing Monsieur. I can never get enough of Bowie - I listen to him a lot. Great post Mondo. Get better soon. x

i saw Bowie do ICHTAM when i saw him live at the astoria (prob was about the same time as that clip). I couldn't believe that he did that song, such a great track, but until then he always seemed to dis-own his early mod\Newley stuff.

Remember when he was doing that 'farewell' tour of the hits (Sound and Vision tour... 90??), he did a phone vote in each country and said he'd do the top 2o in each location. Word was that the Laughing Gnome pissed it to the top in England (largely due to a NME campaign) but needless to say it never made it. Funny enough, the set list seemed amazingly similar at just about ever gig, so i reckon the phone vote was a swiz!!

MB - just mailed you a couple of extra nuggets - be firing them your way in a mo' RM.

There was mention of the Laughing Gnome stitch story in 'To Major Tom' P, but yeah ICHTAM is a scorcher and sounds so contemporary hard to believe it's almost a 45 year old tune..I'll be loading a few more Bowie related Cyberspace Oddities in the blog soonish...

the whole thing about mod being always looking for something new that nobody else had is too often lost in a desperate dash for hush puppies and that funny small faces hairdo so maybe bowie's been a mod all along ?

Thanks DVD, IB - and you're right Ally, I think intentionally or unintentionally Bowie's never lost his modness and has always defaulted to dandyness or sharp suits - he even covered Waterloo Sunset on his last album (watch out for that one later).

You are right, the BBC version of Heat of the Morning is far superior - I'd only heard the other version (& Last Shadow Puppets version too. thanks for posting it

Its funny, when I first got into Bowie in the early 80s (although it was his 70s repertoire I was into of course) I kinda dismissed his pre-Space Oddity music. Years later with a much broader musical appreciation under my belt I dug out the early singles and the Love you Til Tuesday stuff and couldn't believe just how damn good it all was. Some really great tunes...