Funky Friday - What You Need You Have To Borrow 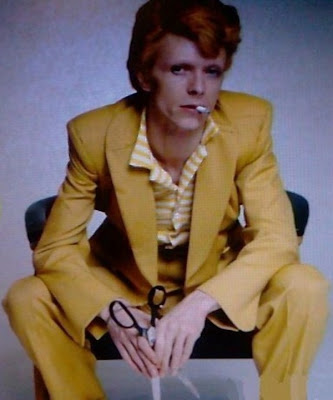 The King Of Cut And Paste Pop Culture

Popular opinion would have you believe 'Young Americans' was a calculated attempt by Bowie to attract the attention of, a so far, apathetic American audience by dropping the glam rags and reinventing himelf as a seventies soul boy. Realistically it was more of a revert to type. Ziggy only lasted 18 months, and snappily suited dance fan rather than outsider-outfits has been Bowie's default career setting (Mod, Young Americans, The Thin White Duke, Lets Dance, Tin Machine...).

Dig a little deeper and you'll also find he'd started dabbling with Disco a year earlier - alongside pet projects and helping hands for Lou Reed, Iggy and The Stooges, Mott The Hoople during 1973, Bowie had also found time to write and produce one full album 'People From Good Homes' (recognise that line from a later song) for his backing vocalists The Astronettes which was dressed in a disco trim...

The Astronettes - I Am Divine 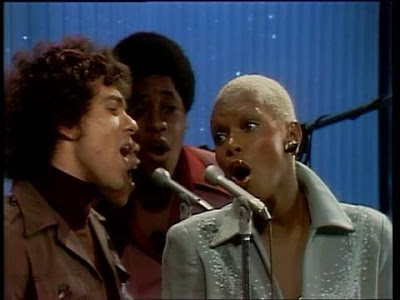 During the Young Americans sessions, Luthor Vandross (in pink above and blue below) had become an almost honorary member of the Astronettes - joining them at recording sessions, and for an appearance on the Dick Cavett show 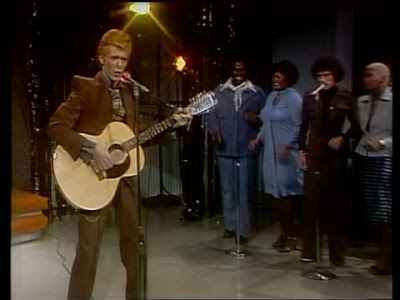 Bowie remodeled one of Vandross's tunes 'Funky Music' as 'Fascination' for inclusion on the Young Americans album (with Vandross getting a composer credit)..

During his Dick Cavett set, Bowie also covered The Flares 'Footstompin', which had been given a seventies style re-riffing by Carlos Alomar. A riff, which one month later became worked up into 'Fame' by Bowie and Lennon (with Alomar getting a composer credit for his contribution).

As well as having a magpie's eye for bright ideas and what's hot - Bowie also clonked out some cracking compositions of his own - an unreleased original being...

I will get the Bowie-handbrake on soon, it's just that I've been ploughing through the Tony Visconti biog' this week, and have just hit the 'Young Americans' chapter you see.

However, if you fancy more Bowie business an excellent companion to his mid-seventies period is the excellent Golden Years website 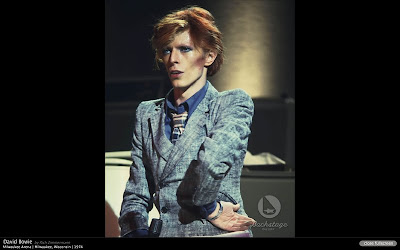 I've never heard that Luther track before. Wow. I thought Weller was the biggest magpie.

Thanks both - he's a terror for it (in a good way)isn't he - and does make sure the contributors a credit. The Astronettes album is well worth tracking down - and features 'I Am A Laser' later reworked as 'Scream Like A Baby'...

Good work, Mondo. I haven’t had time to listen to it all yet but ‘Wow!’ Bowie from ‘Young Americans’ to ‘Scary Monsters’ is my favourite era for him and one of my favourites for music in general.

On Balance, "Young Americans", and "Diamond Dogs" before it, are two of my favourite Bowie outings. There was a fair bit of white soul funk on "DD" too.

Man, you can post all the Bowie you want in my humble. Awesome post! I love the pictures and the tunes. I never knew that about Luther. Very cool. I enjoy Bowie no matter what era and persona. Have a cool weekend. Cheers!

Mick - IB with you on that era, the Aladdin Sane to Scary Monsters run is a scorcher - have you heard 1984/Dodo - an outtake from Diamond Dogs but the absolute crossover point between DD and YA - you can catch a live version here. Don't know why he never released it..

Thanks keith and for the myspace message too

I confess to havin gseen LVD at Wembly Empire Pool a long time ago. He played 45 mins and left. Same with George Benson. That Bruce Springsteen has a lot to answer for!

Am a big Bowie fan mondo, but some stuff i was unaware of there. Really interesting bit of diggin there. Top marks!

Col would never have put you down as Luthor Van ' fan - did you know Bowie was one of the first to pick up on Springsteen? There's photo's of them together at the Young American sessions (where Bowie even covered a Bruce tune 'Hard To Be A Saint In The City')

Thanks P - got a tom of other Bowie oddities, obscurities and nugg's tucked away for later use

Another great post! I'm torn between thinking how fantastic he looks, and wanting to feed him a plate of shepherd's pie...