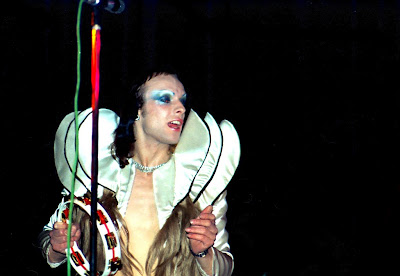 Only Eno could could unplug from Roxy's sequins, sci-fi and avant glam, patch in with a desperately untrendy mob of spit and sawdust pub rockers - The Winkies, and still make music that sparkles.

Following his firing/resignation from Roxy Music, Eno hooked up with The Winkies for live appearances. But, after just five gigs he was hospitalised with a collapsed lung* (he'd been hit by a car, but whispers at the time suggested an over-enthusiastic bedroom session). Before the accident Eno, along with his new backing band, recorded a Peel session for the BBC, reworking (or is it rewinking) some early solo-era songs. Including Totalled a ramped up proto version of I'll come Running with almost Edward Lear style lyrics (it eventually ended up like this)

Post Eno The Winkies went on to record an album produced by Guy Stevens (more on him later) with The Paw Paw Negro riff being recycled as, well, ermmm..

The Winkies - Trust In Dick 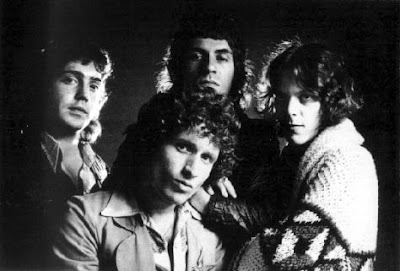 *It was during Eno's enforced convalescence that he invented ambient music. Eno's Sleeve notes from Discreet Music - his first' ambient' album

In January this year I had an accident. I was not seriously hurt, but I was confined to bed in a stiff and static position. My friend Judy Nylon visited me and brought me a record of 18th century harp music. After she had gone, and with some considerable difficulty, I put on the record. Having laid down, I realized that the amplifier was set at an extremely low level, and that one channel of the stereo had failed completely. Since I hadn't the energy to get up and improve matters, the record played on almost inaudibly. This presented what was for me a new way of hearing music - as part of the ambience of the environment just as the colour of the light and the sound of the rain were parts of that ambience.

Or perhaps trying one of Eno's Oblique Strategies
Posted by Mondo at 7:16 AM

Those Eno programmes were damn good no?

Very interesting! That squally guitar solo halfway through 'Totalled' is like something out of a pub-rock proto-"Heroes" !

PS: Random Oblique Strategy card - 'How would you do it?'

The Eno (and Roxy) doco's were so good - Eno came across as the Clarence Oddbody of rock. I'm on the Michael Bracewell Roxy biog and that's well worth a go.

Fascinating. I couldn't help thinking quite how very rich Mr Eno must be when watching that doc. LOVED the Roxy doc so much. Thanks for sidebar push xx

LOL as the kids say. Paw Paw Negro Blowtorch and Trust in Dick might share the same riff but the gulf in class is immense.

He's got to be minted Romo - I used to work with the husband of his PA in the early 90s, who said Eno was always getting royalty cheques dropping in for music used in films, adverts etc - and he had 3 houses in different parts of the globe. This was before his U2 and Coldplay work, which he must have been on a points system for, so would have bumped things to silly richness. Apparently a really nice bloke though - my mate went to a concert of Eno's in an extinct volcano once (used for acoustics apparently)

The full four track Peel session (also including Baby's On Fire and a cover of Fever) was available on a semi-boot CD titled Dali's Car in the early 90s Mick, but these are the best quality version I've heard. The Winkies tune's a stinker isn't it - but the cheeky winkers have even reworked Blowtorch into title on one of their album tracks 'Davey's Blowtorch'

Hooray - everything working a-ok at home!

I like Brian Eno in theory, but generally not in practice so I was suprised by how much I liked these tracks. Way, way better than his ambient 'work'.

Must say I find Eno a bit 'hit and miss' too (and Roxy for that matter). But he seems like a genuine kinda guy, and the BBC4 stuff was fab!!! What a great station that is turning out to be.

Have you tried Google Chrome - Cocktails. None of those pesky IE, Firefox snarl-ups.

New Age music did a disservice to Eno's ambient material - it put a sort of cod-spiritual and pan-pipes slight on it, when really it was always intended as soundtrack or non-music. And it's great background for reading to. I've mailed you a few must trys..

Even though I got into l to Eno and Roxy via Bowie P, I listen to them both more than Bo' now. and yes both are patchy in places - but dig around the highlights and you'll find some timeless gems.

Eno - Another Green World, Before and After Science, Here Come the Warm Jets.

Roxy - First album three albums are must-haves, and then Siren (one of my faves but generally snubbed by Roxy purists)

Both Ends Burning from Siren is one of my favourite Roxy songs ever.

To my mind Siren is Roxy's most consistent album Mick - there's not one a duffer on there.

Burning is a stand-out tune. Incredibly Duran Duran made an entire career out of reworking that one track.

Well I've been an ENO fan since my teens (I'm 40 now) and I've never come across Totalled before. What a find. It's about time for someone to put together a decent ENO rarities comp isn't it?