Well I'm off again next week - no plans as such, just a bit of buzzing about, hoofing around and putting the handbrake on so to speak. And, if the evenings heat up, I may even have a stretch out and sip to this 'Lazy Sunday' mix - a medley of modish, acid jazzy, lower tempo beats and bobs - hope you do to.

I've also reloaded the 'Summer Sounds' mix up on the other side if you fancy grabbing that.

'brilliant green' photo by Chocolate Girl 64
Posted by Mondo at 9:22 AM 14 comments

Standing In The English Rain 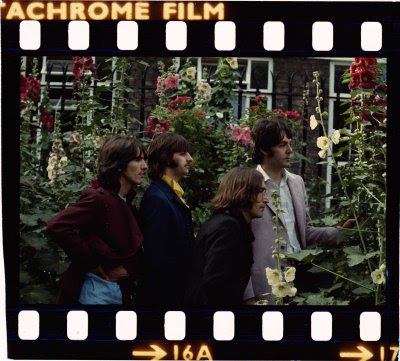 I'm on something of a Beatles buzz at the mo' - The White Album, Love and a self compiled CD being the most played albums on our recent Cotswolds run. The Fab's catalogue is something I occasionally drift away from distracted by other old stuff, odd stuff and new stuff but will always loop back to The Beatles at some point.

So what a result then, while bumbling around Broadway last week swerving the squall, to find that sixties scene snapper Tom Murray was in town to talk and chat about his set of previously unseen photos from the Beatles 1968 'Mad Day Out' (now being sold as limited run of signed prints), well we had to hoof along and lend an ear didn't we? You can see all 23 shots here - which look stunning blown up and framed (I bought 'Coming Apart' shown below) - but why just 23? Tom only got a last minute invite from Don McCullin (the centrefold photo on the Red and Blue greatest hits albums is one of Don's 'Mad Day Out' shots) to join a 'pop group' photo shoot, but wasn't told which 'pop group' - so only grabbed one camera and two rolls of film.

So, how about a barometric anthem for this summer - which ironically never popped into play on last week's roll around the Cotswolds. 'Rain' seems to be the tipping point as the Fabs go from loveable moptops to furry freak beaters. Points to check out are..

Maccas chipped tooth and puffy lip (the result of Scooter accident while on his hol's - and a reason for his 'Pepper' period 'tache). 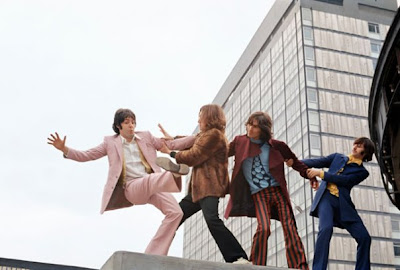 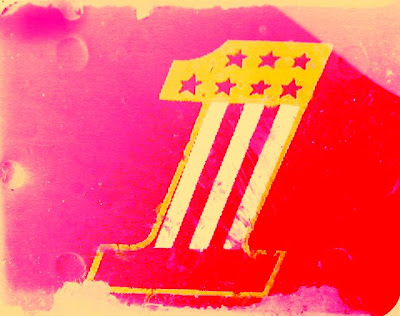 I'm nipping off next week, (back to sunny Stow - again) but while I'm away - on August 15th - this piece of ol' puffery completes it's first year of orbit in the blogosphere (I'm discounting, but not deleting the first three directionless posts) - so to celebrate breaking the one year barrier, I've made a pick 'n' mix buffet of tasty treats and groovy goodies gathered from all around my hat.. err, blogroll.

So, a tip of the titfter and a 'thank you for the music' is due to all those on the '1YS' tracklist for the tip top tunes, and to anyone who's ever contributed or commented on this ol' blog, as well as a ton of cyberchums for chit chat, chippings in, inspiration and ideas like ...

And finally a special mention for all those silent peepers, prowlers and binge bloggers that arrive via random.com and spend around 12 hours necking down every page and piece without a whisper.

So my funky friends tuck in, fill your boots, raise a glass, shake a leg and here's to another fab year . 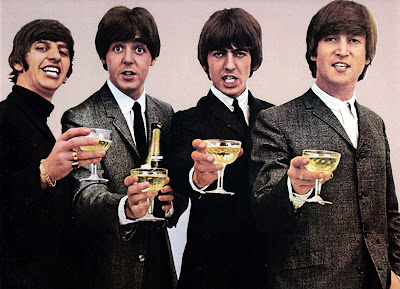 AND to think I was actually worried about running out of puff and stuff to stick in my cyberspace scrapbook.

Did You Know ? The colours on PM and are inspired by Swizzles Double Lollies and the fact that pink/orange/both seemed to be such a popular pallet in the 70s. 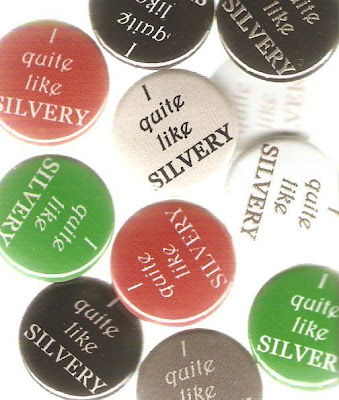 I've been getting in a fizz and a froth about Silvery and their Sparks/XTC hurdy-gurdy style jiggery-poppery for some while now, and it all seems to be coming together for them as speedily as quicksilver. Here's the news - and it's all good...

They've been played on Radcliffe and Maconie

Steve Lamacq's been raving about them in his Blog - and had them in session on his show.

The new album 'Thunderer & Excelsior' is out on the 11th, and will be featured as 6 Music's Album Of The Day on the 12th ( the'Devil In The Detail' single was also the winner of a recent 6 music Round Table )

So if you are in the Brick Lane area on the 15th why not pop along and have a peep? The Silvery surfers always put on a fast and furious live set - it's like a gig, only on fast forward - where you'll be able to lend an ear and shake a leg to tunes like...


All the dates, details and Silvery whispers are right here...

Silvery - MySpace Site
Posted by Mondo at 9:30 AM 9 comments 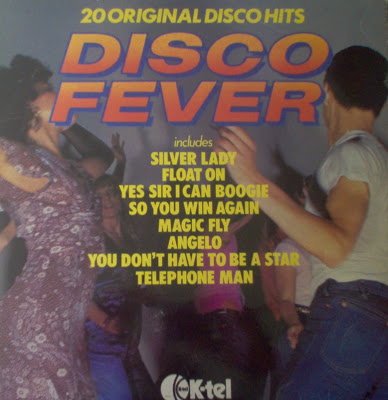 Axe Victim says 1973 is the summer of summers. But for me, the top pop year will always be 1977. It's an overlooked classic - and the year sound and vision went Concorde shaped and Skylab sounding - Bowie released 'Low', 'Heroes' (and clonked out 'Lust For Life' and 'Idiot' as hobby projects), Giorgio and Donna gave us deep space disco, there's Space - 'Magic Fly', Meco - 'Star Wars' and JMJ 'Oxygene' - see what I mean? And then you've got Close Encounters, 'Calling Occupants', Bond's Lotus Esprit, Saturday Night Fever, Star Wars, Punk wars, the deaths of Marc Bolan and Elvis - you just don't get designs, dynamics and dramatics like that in many other years.

My personal obsessions during the summer of 77 were...

And as I started to make the move from pick 'n' mix singles to adult size albums the record I wanted, really wanted - and got for Christmas was K-Tel's blistering 'Disco Fever'. You can enjoy the full track list here, and for MOR eye popping madness have peep at the cozy cardie coloured charts from 31 years ago - both of which are almost entirely untroubled by any punky doings.

RAH Band 'The Crunch' (as featured on 'Disco Fever')


There's a TOTP appearance too


Original trailer for 'The Spy Who Loved Me'

Elvis 'Way Down' ( Alt take with added piano at the coda)

If you fancy a few more sounds from the summer of 77 hop on over to...

My selection for Book Of The year 1977 - Man Eating Sharks

Always wanted one of these G and S Fibreflex boards (and a trip to Skate City or the South Bank), but never managed to get either. 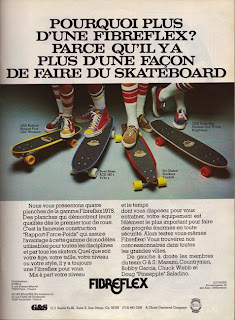