Sunday Sessions: All this, and he plays the Hammond too... 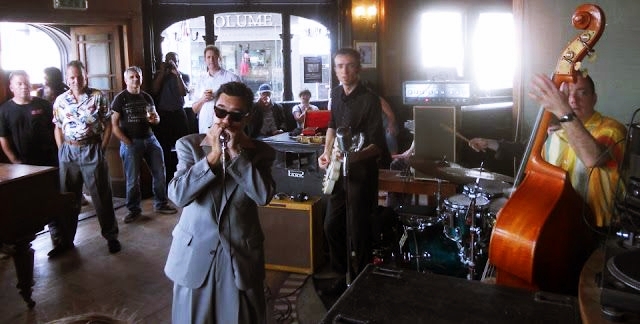 Out in Finland last month, sharing a bill with Buddy Guy, Johnny Winter and playing to crowds of around four thousand - Steve 'West' Weston scales down his hooting 'n' tooting this weekend as he brings his blues-blasting band The Bluesonics to The Railway on Sunday from 4:30

Buzz yourself to the bottom of this post and you'll catch Steve as the harp player of choice for Mud Morganfield/Muddy Waters Jr (Muddy's eldest son). A platinum plated endorsement in anyone's Book of The Blues.

But, harmonica aside Steve's also a boogie woogie piano man and a dab-hand on the Hammond. At the last couple of Sunday Session's we've managed to catch a natter exchanging Hammond faves Booker T (me), Henry Cain (Steve).

So buckle up as, today's preview tunes for this Sunday's playlist come to you hand-picked by Steve 'West' Weston..

Jackie Ivory - Do it to Death

Cathi Unsworth and the Norfolk Noir of Weirdo

Following on from Friday's post - my Weirdo review taken from the current edition of Level 4 magazine, an absolute head-spinning novel framed against an 80s landscape - it is the perfect read as those autumn evenings begin to draw in and the shadows start to stretch out 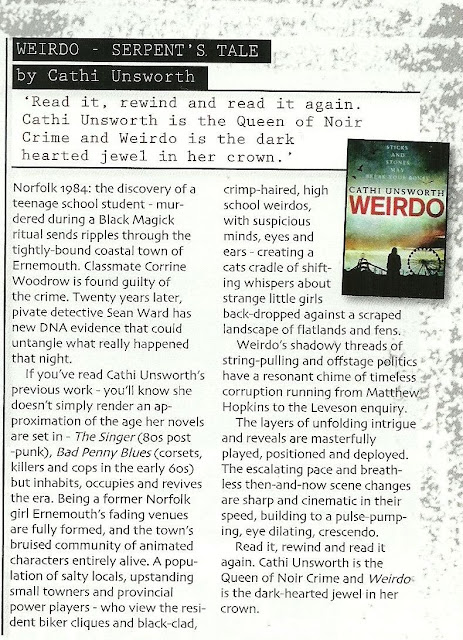 Comes in the format of two art, fashion and music periodicals.

Plectrum The Cultural Pick: where Cathi Unsworth - described by author, David Peace, as “the First Lady of Noir Fiction”, talks to Jay Clifton about her previous books, her approach to writing and latest novel 'Weirdo'. Chris Price, interviews Bruce Lacey on his associations with The Goon Show, Ken Russell, The Beatles - he was George Harrison’s flute playing gardener in Help, and is celebrated in the Fairport Convention song, Mr Lacey. And new short fiction by Max Stites, fashion from Fifi Chachnil, make-up by Illamasqua and shoes by Jefferey West.

Alongside all of this cultural buffet - you'll find me putting Fay Hallam and The Bongolian, Balctic Fleet, Hollie Cook and Philippe Petit (my first classical/experimental review) under the Plectrum Analyser, in the music review section...

Perhaps, follow up by backtracking to my Bad Penny Blues interview with Cathi here.. 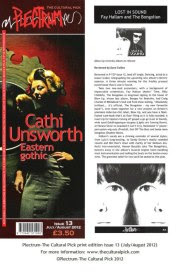 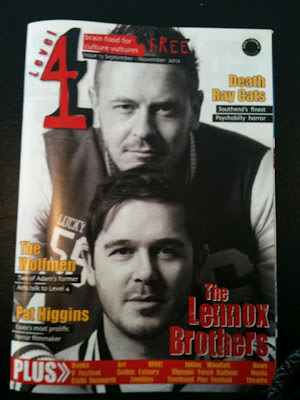 The Sunday Sessions: Flats and Fifths 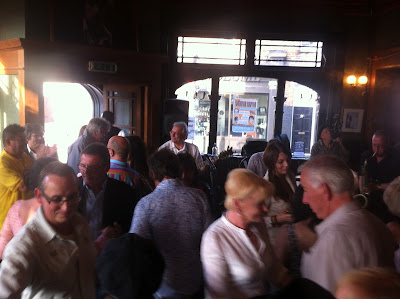 Swinging at the Sunday Sessions - get me in the floral shirt!

Flats and fifths: those steps and semitones that give jazz and blues their particular modal moan. Jive along to The Railway this Sunday and you'll be for in an afternoon of flats, fifths, blues and boogaloo - live! As the always excellent (and one of my top ten favourite guitarists) Martin McNeill and his Bottletop Blues Band take the floor from four. 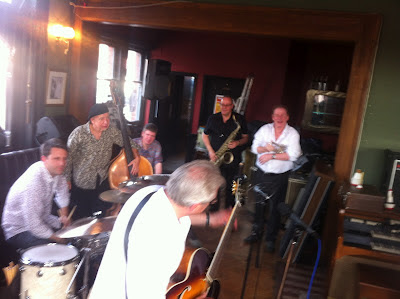 A couple from the crates popped into the pot may well be...

Protest and Survive: 'the best night out in Britain' 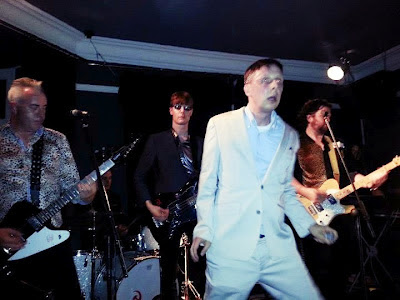 What a tear-up, what a shakedown, what a shindig!

As if Saturday's temperatures weren't scorching enough - the needles were knocked right into the red (in all senses) as the dream team-up of Eight Rounds Rapid and Thee Faction shook, rattled and rolled the roof right off of The Railway Hotel. An evening Thee Faction are calling 'epic' and rubber-stamping the Podrophenia Roadshow as 'the best night out in Britain. Fact.'.

We salute you comrades.

Due to time issues - the Long Run had to zip to another show. So first up (in the newly renovated gig room) - Eight Rounds Rapid - thumb-nailed thus by Faction vocalist Billy Reeves:  the real story of last night was Eight Rounds Rapid. Best young band in Britain? There's a very strong argument for it. 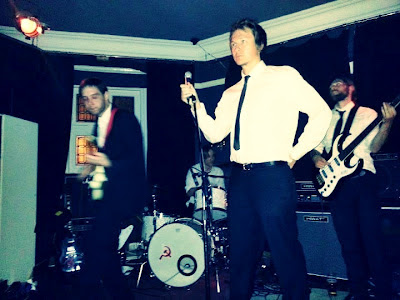 Sharp suits, snappy songs and nippy lyrics combine to make 8RR a fully formed powerhouse, punching well above the tag of 'local band' with a setlist of zippy originals supercharging the audience into a roaring response.

Handing over by way of MC Marmite Boy - Thee Faction's set of rabble-rowsing R 'n' B was almost speakers corner crossed with a gospel-meet mania. Tunes from the new LP Singing Down The Government were received like long lost friends - with long-haul Faction standards - Union Man becoming refitted as improv seaside sing-a-longs.

And worra reception: a volume of  foot-stamping, hand-clapping cries for 'encore' and 'more' - that I haven't heard at *any* gig since the 80s. Possibly the greatest Southend live night since Dr Feelgood recorded Going Back Home at The Kursaal


The Quinn Martin style epilogue was Piley and I, running 'til one spinning bangers and boomers from popular beat combo's with nineties tracks being the floor filler preference. Along with a bit of Bowie..

There's already talk of a rematch next year - but if you couldn't make the gig - fill your boots for free with a take away version of Thee Factions new single - Soapbox. But it's only on the freemans for a week - so grab it here sharpish.. 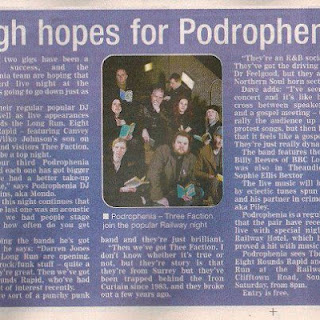 A huge thank you is due to jazz singing journo Hannah Marsh, for the Evening Echo support
Posted by Mondo at 10:18 AM 3 comments

Podrophenia Roadshow the third: Backing the USSR 'n' B 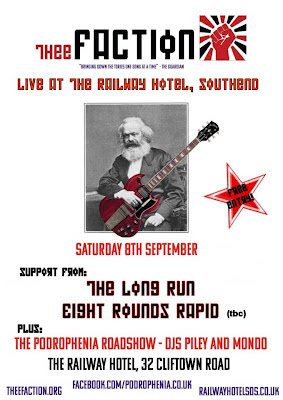 Calling all residents of the Podrophenia postocde: Saturday the 8th September, sees the third Podrophenia live leg-shaker, with Piley and I bringing you a tricolour of musical treats live at The Railway Hotel. A three way shakedown pooling together talent from all along the watchtower Thames Delta.

In the Canvey Corner: The Long Run. A fully formed band fronted by Darren Jones as seen on Podrophenia TV...


In the Southend Corner: Eight Rounds Rapid. As heard on Tom Robinson's 6music

In the London Corner: Thee Faction, a left dressing socialist, soul-stomping collective, hoofing all the way to opposite end of the estuary to showcase their new album - Singing Down the Government

Piley and I will be firing up the Railway radiogram between the bands spinning in funk, soul, covers, and curiosities.It all kicks off from 7pm - so come down and join in the jamboree
Posted by Mondo at 12:48 PM 4 comments

The Podrophonic Alphabet. N is for... 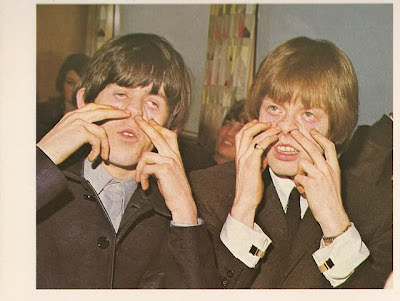 Back after a summer break, Piley and I roll out the 14th instalment of the Podrophonic Alphabet: N: for new tunes, new bands, New York, Piley's Newsround as well hoots 'n' toots for the third Podrophenia Live Night on September the 8th at Southend's Railway Hotel.  You'll find tracks from all three bands (Thee Faction, Eight Rounds Rapid and The Long Run) on the bill popped into this edition, as well what is a Nanker Phelge - see above.

We've also got a mystery theme tune, some natter about a night out with Hugh Cornwell and and a drop in appearance from Blow Up Records boss Paul Tunkin - so dig in and tell a pal!

Podrophenia - The Letter N
Posted by Mondo at 11:50 AM 0 comments