A Change of pace

You may remember I mentioned we'd had some unexpectedly bad news earlier a couple of months ago. At the time, being breathless from the blow, I couldn't quite bring myself to talk about it - but now, things are beginning to slip quickly and I feel I need to.

My mum was rushed into hospital in March, what we expected be a stomach condition was diagnosed as liver cancer. At first the prognosis and prospects seemed as positive and manageable as you could hope for given the situation. But over the last few days mum's health has started to decline rapidly, and as things begin narrow to their natural conclusion, she's chosen to come home to be cared for.

None of us have been prepared for the speedy efficiency of the disease and its impact and effect in other areas. So I hope you'll understand why I may be quiet for a while.

David Crosby - Song with No Words 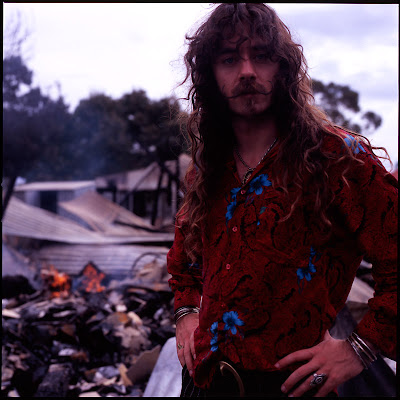 Meet Richie Jackson the Australian skateboarder who's more Salvador Dali than 'surfer dude'. His look may be Robert Plant joins Jellyfish. But don't be misled by the Hobbiton hair and 'tache topiary. Richie's a psychedelic skateboarder with the surreal, high-flying fluid moves of the Silver Surfer. An eye-popping eccentric of mentalist inventiveness - think:Wilf Lunn meets Willy Wonka. 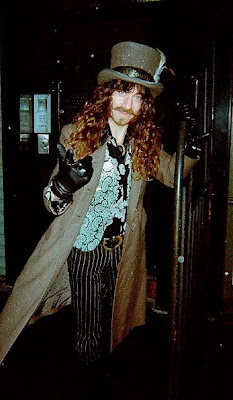 Flipping, gliding and grinding over and around the unlikeliest urban furniture. Pavements, pipes, posts, rope chains, escalators - trees even! No boundary or bollard can contain his combustible skateboard combos. 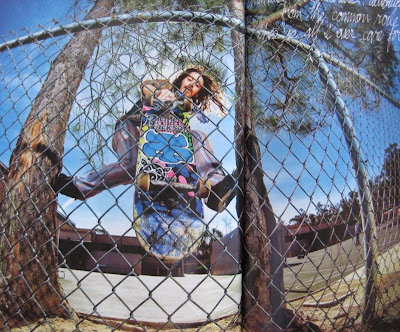 Behold, boggle your eyes and blow your mind at the the screaming genius of Richie Jackson

Sound tracking the vid above is ....
The Attack - Too Old

Sound tracking the vid below is
Pentagram - Be Forewarned

Do you ever feel like peeling off and running through the streets naked and free? 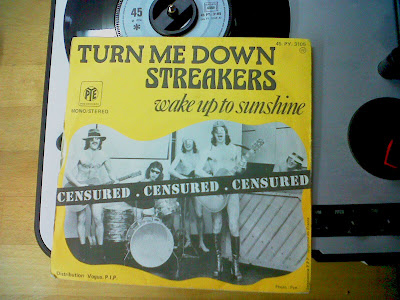 The A-side is an absolute glam-stamping anthem.

The Streakers - Turn Me Down

The B-side is a sunny day delight a'popping and a'fizzing with zip, zing and swing.

The Streakers - Wake Up To Sunshine

Now get your kecks on you filthy beasts
Posted by Mondo at 7:46 AM 15 comments 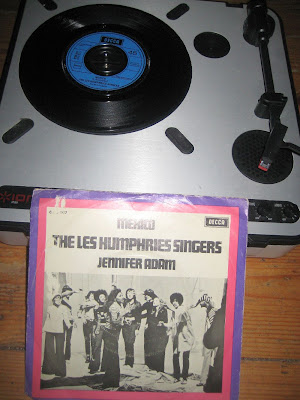 For today's rummage around der Welt of Germanic shenanigans and Teutonic rockers , we won’t be rooting through the well documented and commendable end of sweaty basements and bierkellers - kindergartens to the sixties beat boomers. Or the Vorsprung durch Technik of Kraftwerk, Can and Neu! Not even a peep at one of the finest live music shows ever Beat Club/Music Laden - why did this TOTP meets OGWT format always draw out such punchy performances from the rock aristocracy of Bowie, Roxy Music, T.Rex, Tina Turner and umm The Sweet. 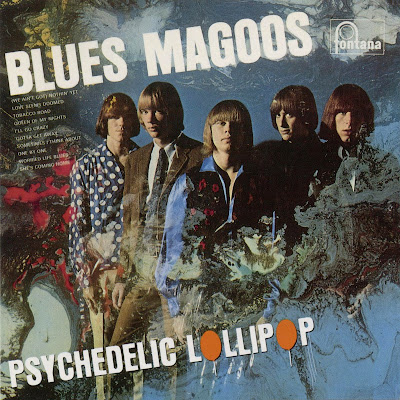 How gutted and crushed must the Blue Magoos have been to hear the explosive opening bars of Deep Purple's Black Night ringing out from radio and record shops. Purp's fret-melter Ritchie Blackmore had plainly pop-lifted the nippy little lick underpinning the Magoos' 69 garage classic (We Ain't Got) Nothin' Yet, literally stealing their heavy metal thunder - buffing, bulking and bullworking it into Purple's mega-metal anthem and international hit.

Blues Magoos - (We Ain't Got) Nothin' Yet

King of the Germanic swingers shakes a heavy leg.

Piley and I should be recording a new podcast soon - along a similar riff of 'originals uncovered'
Posted by Mondo at 7:10 AM 9 comments 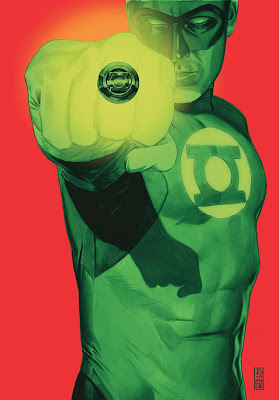 Typically I’ll try to handbrake most jabber and blab about my comic habits. But with just three posts in three years - hope you can indulge me with one more.

I've been a Bat-fan since the age of three, with some of my earliest reads still in the collection - although, it's a much lower-league legend, mostly unknown to non-comic fans, that I've constantly collected for over thirty years - Green Lantern. I won't bore you with his biog - there's a danger it may reduce down to nerdism - but it's all here should you fancy some backstory.

From it's 1960 debut, The Green Lantern title middled along for almost a decade, until, in an attempt to resuscitate stalling sales and add some contemporary edge, Denny O'Neill (script) and Neal Adams (art) were drafted in from Batman/Detective Comics - having previously repositioned The Dark Knight away from TV's campy trappings, returning him to shadowy artwork, gothic plots and increased credibility and circulation. 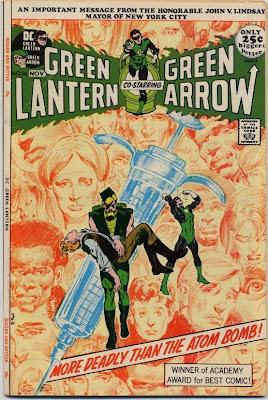 O'Neill and Adams literally brought Green Lantern down to earth with a cultural bump. Adams documentary-ish artwork and O'Neill's protest tales teamed GL with the liberal, left-leaning Green Arrow for an Easy Rider style road trip through the America's underclass and dropped-out, drugged-up, counter culture. Alien invaders and space states were scrapped for teen drug addiction, ghetto poverty, political corruption and cult religious leaders - kick-starting the 'relevance era' in comics. Ultimately, these protest tales proved too worthy and weighty for DC's readership and the title was cancelled in 1972. Ironically, it's the O'Neill/Adams 'Hard Travelling Heroes' issues that have become high priced collectibles in the Lantern's back catalogue. 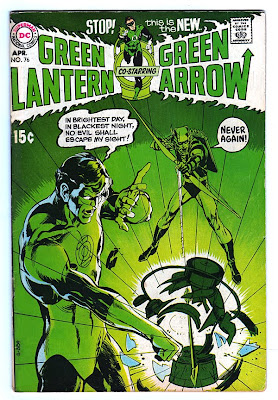 Green Lantern 76: expect to pay anywhere between £1000 - £2000 for a near mint quality copy
It’s a common plot and publicity device for super-types to be killed off only to be reanimated at some later date (in case you didn't know Batman's alter ego Bruce Wayne died a year ago). Following three decades of hot runs, restarts, cancellations and the eventual death of Hal Jordan, Green Lantern was brought back from the dead, revived and ready for action in 2004. A reboot that has brought the title it's greatest levels of success and saturation in a fifty year history. Green Lantern The Movie is being filmed as I blog (scheduled for a June 2011 release). More significantly DC publishing clearly have grand plans and great expectations for Green Lantern - for the first time in seventy years, DC are deliberately positioning and putting some promotional focus on a character ahead of their traditional Holy Trinity of Superman, Batman and Wonder Woman. 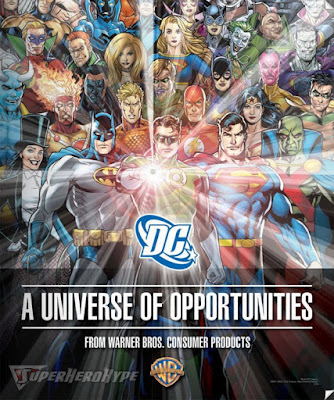 Green Lantern has never really crossed over into the same cool, cultural or rock and roll referencing as Spiderman, Batman and Superman. As far as I'm aware the he's only been name-checked in one song. Historically you've probably heard his name countless times without realising. In Donovan's Sunshine Superman...

Superman or Green Lantern ain't got a-nothin' on me 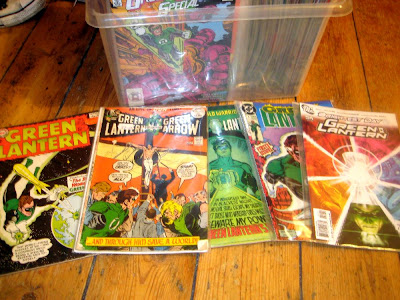 From the sixties to the noughties - one from every decade