Five reasons to grab yourself a copy of the new Level 4.. ... 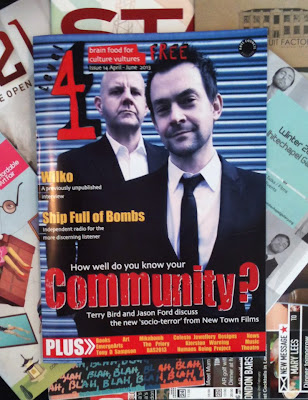 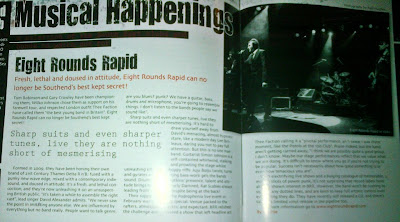 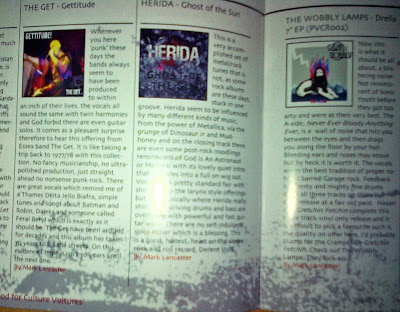 3)  My previously unpublished interview with Wilko 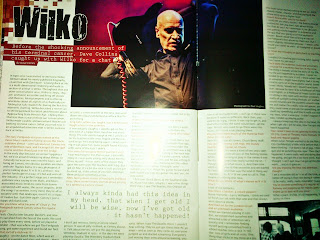 5)  It's completely free and available at these locations
Posted by Mondo at 10:03 AM 0 comments 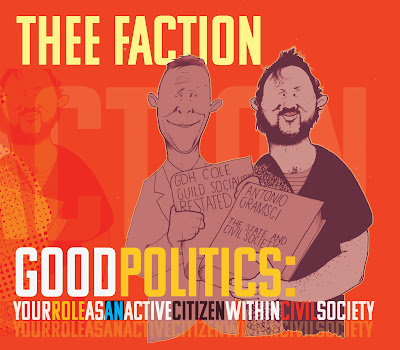 The April edition of Radio Podrophenia brings you the sixteenth instalment of our Podrophonic Alphabet - the letter P...

Politics, pants, peace, pursuits and pettiness are all on the playlist. As well as talk of print editions

And, we welcome in an all new guest for the Podrophenia Sessions as Seasider Paul Hill steps aboard for live tunes and chat..and an exclusive spin from Thee Faction's minty-new album

Join us at Radio Novalujon - live from 9. Or swing by the Facebook page and say hello... 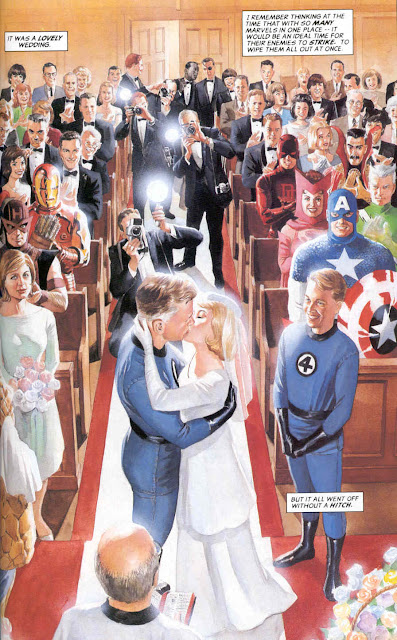 Can you find all four Fabs hidden in the pic

From today through to Sunday it's a three way whammy of music, gigging and disc-spinning.....

Friday: the long-awaited wedding of Southend pals Su and Jack, with a reception at The Railway. Stomping, shaking and shindigging will be taking place from 2pm through to who-knows-when? musically there'll be a selection of live music from local talent and (larger than local) legends. I'll be on the decks (and possibly on bass for a bit) pinging in an improv playlist of soul, funk and old nuggets and new treasures... 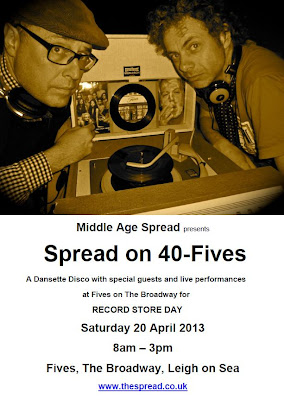 Saturday: National Record Store Day and a medley of local DJs Daryl Easlea, Curly Dan (pictured above), Beardy Al, Prof Andrew Branch of the Middle Age Spreaders and Podrophonic representation from myself are all parking up at Fives in Leigh Broadway, rotating actual vinyl records instore from 8 - 3. With live music from Hannah Marsh and Tom Burgess. A Dansette Disco we're calling it with double decking of these portable players. One on loan from home.

Outside of the Bluesonics. West records with Scandanavian combo Trickbag, the new album *title* is out now has been on a repeat loop play since first play. Dig in and sample West's fruity-tooting blues above

She Was Only a Grocer's Daughter 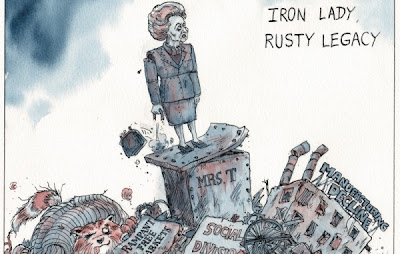 Do you know what the most energising aspect in the wake of Thatcher's death has been - whether it's overly-vocal protests (guilty on Facebook I know) or discreet and well deployed grumbles - that anyone who was there and lived through the toxic politics and nuclear threat of the Thatcher era, still hasn't forgotten the spiteful, pig-headed, bully boy backstabbing and squalid hypocrisy of her and the shape-shifting collection of corrupt cronies supporting: homophobia and racism/apartheid, the Hillsborough cover up, poll tax, selling off nationalised industries (diverting public money in to private pockets), choking the unions and union representation, US missiles at British bases, Northern Ireland, pit closures, inner city riots, the managed decline of northern towns.

When the Sun , the Mail,  right wing sympathisers and Tories wave the Broken Britain flag - never forget who broke it...

Or how for all the current Tory soft-soaping, backsliding, historical repositioning and rewriting, glorification and chin-stroking - it was her own party, who after twelve years of an increasingly throttling clench on the country and the Cabinet - were the ones who gathered together to eject her Caesar style in 91. That, is her legacy

There'll be no retrospective tune echoing my thoughts on the most poisonous of British politicians - instead I'll direct you to the Thee Faction's new single Better Than Wages - and some smartly considered reasoning. The full post is here...

A rabid class warrior has died. The struggle continues. We don’t take moral exception to the celebrations. We just note that her death will do little, if anything, to loosen up the grip of bourgeois hegemony. In fact, if the hagiographical tributes the TV news is showing us are anything to go by, it’s a splendid opportunity for the ruling class to reinstall her as the postergirl of British capitalism. Which is very disappointing. So we need to redouble our efforts.

We celebrate everyone who stood up to her. Those who refused to believe the lies about apartheid, the lies about trades’ unions, the lies about ‘freedom’, the lies about selling off our industry and our housing stock. Those who told her she was wrong in her careful imbalancing of the tax system – whether income or community. We also honour her victims: those who didn’t make it, and those who weren’t strong enough for the new robust liberal individualism she forced on us all. Many of us retreated into traditional ties of solidarity, but any project designed to atomize society is going to leave a lot of people isolated. That’s the point, of course. United we stand, and they knew that.

Thatcher’s gone. But not forgotten. Let’s focus on what we’re fighting for. Onward. 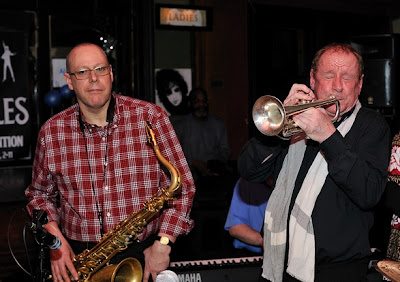 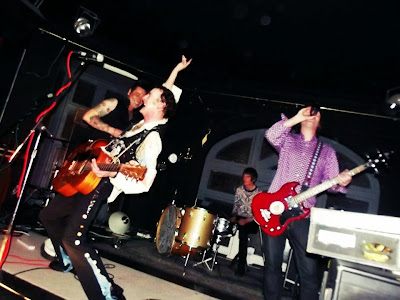 A four-way whammy of winners were on Friday night's bill for The Railway shakedown. I'd managed to grab a loose-blues jam with opening act BONE down In the bar earlier that evening, but due to a few backstage scoops missed his and J.D Smith's main stage sets. 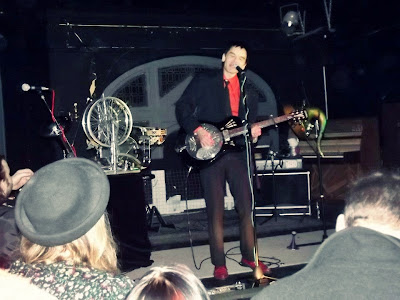 Instead, I crept in late to catch the incredible and insane world of Thomas Truax. Who, travels minstrel style around and about the hemisphere pitching up for gigs with an orchestra of self-built percussive and musical mechanicals. The Mother Superior,The Hornicator: think Wilf Lunn goes steam punk for a David Lynch soundtrack, with each song and instrument introduced and contextualised in a Rich Hall style Texan drawl.

Like TV Smith's solo sets - Ed Tudor Pole, sand-blasts punk's energy and attitude back to raw, acoustic roots, deploying his set as almost protest-folk in the tradition of Wat Tyler meets Woody Guthrie. Still as animated and erratic as when first stepped onto a stage to audition for the Pistols, Pal Ed is Wide-eyed, excitable and engages with audience, fidgeting 'n' twitching around the stage like a battery hen liberated and let loose into a widescreen horizon


At the close of Ed's set an in-house scratch band - Dave Deville, (guitar) Dave Dulake (drums) me (bass) were summoned onstage for a few Chuck Berry numbers, a gospel cover and of course Swords of a Thousand Men. And what an absolute first class blast was had by all. A blinder, a belter and teenage dream to share a stage with a former Sex Pistol (albeit by his own admission for just two weeks) . 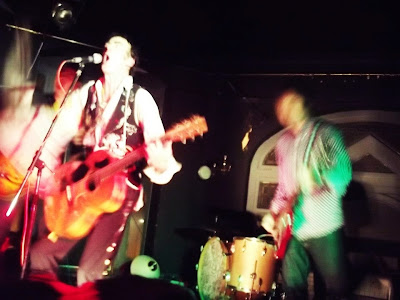 Saturday and it's along to Old Leigh way for the Woodcock Festival. A shuffle of pre-booked bands and open mic types. After Dave Woodcock kindly pitching up for Podrophenia so regularly - it was a treat to be able to join him for an outdoor jam, with a pint on the table, the estuary behind us and the Crooked Billet ahead, blasting out the Chuck Berry and Little Richard covers. 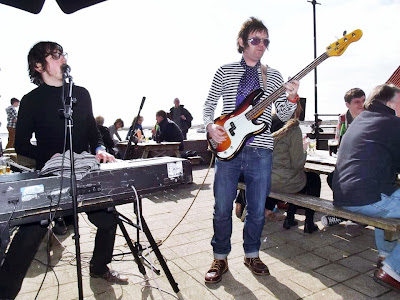 There are even whispers we may be reuniting for a repeat performance on the 28th of April at the Sarah Moore - should you be buzzing about the Broadway that evening.
Posted by Mondo at 10:16 AM 0 comments

Tonight I shall mostly be playing bass for Ed Tenpole Tudor! 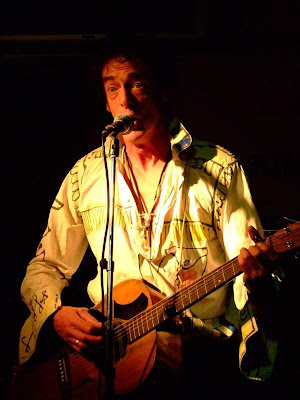 In the summer of 1980 as a trembling teenage punk - and some several years below the age requirement of an X Certificate - I managed to blag my way in to the local Odeon (wearing a homemade Who Killed Bambi T-shirt) to see the Sex Pistols cinematic release - the Great Rock 'n' Roll Swindle. A rambling, scrappy and ultimately disappointing ninety minutes that could have offered so much more (are the hours of unseen out takes and extras ever going to be released?)

Although the opening moments had me wide-eyed and gripped, seeing live(ish) Sex Pistols actually moving around - in an era when the only snatched exposures of musical heroes and idols were frozen monochromatic music press photos - intercut with Helen of Troy collecting together the Swindle lettering while the Pistols auditioned for a Johnny Rotten replacement. A role that eventually went to the manic, erratic Ed Tudor-Pole -

The date of my visit to the flix is documented hereabouts (19th). So a mind-frying Friday night lies ahead tonight as I'll be sharing a stage for a few tunes with ex-Pistol himself - Tenpole Tudor!!   It's a return visit to Southend's most rock 'n' roll local The Railway for Ed TP, on a bill that also includes J.D Smith, BONE and Thomas Truax And finally Dave Deville and myself will be joining Mr Pole for a few covers and of course....

If you're round and about Southend way swing by and come on down for a Friday night bounce... 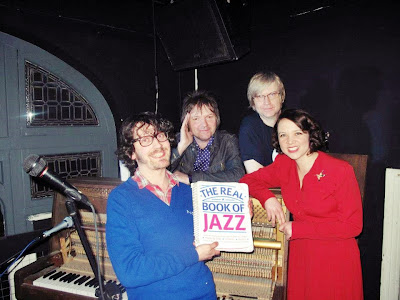 This month's Podrophenia is a jazz-off with all shades and shapes of the form's modal tones gathered together - and includes something for everyone from beatniks to boppers, or even newbie jazzers who don't know their Acid from their elbow.

We've also got - replace the word 'love' with 'jazz' in song titles. And as a centrepiece - four live tunes from the American Songbook delivered by Dave Woodcock and Hannah Marsh ..

All contained hereabouts - dig in jazzers