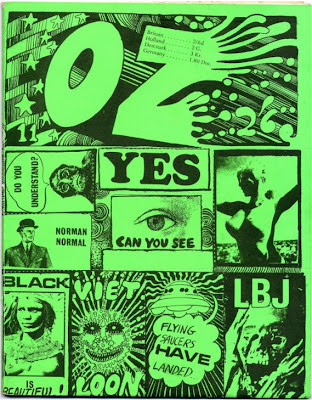 Hairy-headed, heavy-loaded, underground funk is the mood of today's FF,three walloping slabs of post-psych-freak-rock, where you can almost waft away the patchouli and incense, smell the embers slow-burning the rug, and watch the Robert Crumb or Che poster a'peeling from the smoke stained walls.

I know nothing about Colosseum apart from...

Yes that Manfred Mann, but sounding eerily like a proto Charlatans

If you're in the mood for more fuggy-fruggery then check out Andy Votel's Vertigo Mixed.A comp of head spinning mixing and artful editing, swirling with rocking oddities and obscurities, so good, I've never quite got to the end - it's like a guitar version of Too Many DJs

Or, why not lend an ear to Marco Pirroni's hand picked Glam Prog favourite, and a tune that inspired his signature guitar twang - it's right here...

And finally something for your third eye.. 'Tonite Let's All Make Love In London' 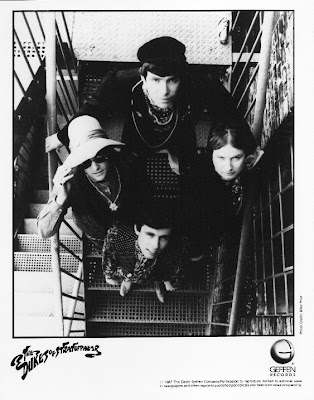 The Dukes of Stratosphear - Vanishing Girl

The Pursuit of Happiness - She's So Young..

Click here for the 'Vanishing' chords and lyrics, and if you don't already know the Dukes secret identity, but are keen to find out - click on the pic 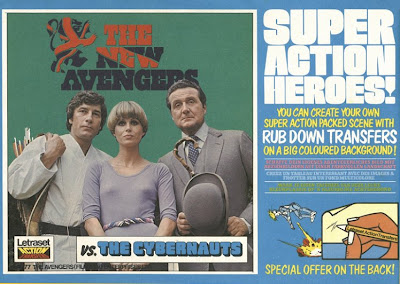 For a full list of 'Letraset Super Action Transfers' click here
While sprouting from tot-to-teen during the seventies, I was a terror for TV Detectives - both the US variety covered (here), and the Brit-Cop shows that employed an almost off-the-peg parade of villainy..

I've still got my pick 'n 'mix library of original crimebusting Annuals stored in the loft, collecting together - The Persuaders,The Protectors,The Professionals, The Sweeney (surely The Sweeney were a bit too rough and ready for an Annual readers catchment audience) and The New Avengers..

Laurie Johnson's New Avengers (a flared and swishy refit of his sixties original), is surely the template tune for almost every Acid Jazz track, and gets worked over here by Southend's very own Snowboy...

Another Laurie Johnson anthem, and perhaps the greatest car-crashing-glass-smashing action theme ever.. - shouldn't Lewis Collins really have been the follow-on-Bond from Roger Moore?

Finally, can you decode this mystery title tune - and work out which show it's from??

The inner spread of The New Avengers Transfer set seems to be based on Heatherden Hall, part of the Pinewood Film Studios - which appears in The New Avengers, The Professionals, The Persuaders, UFO and Space 1999 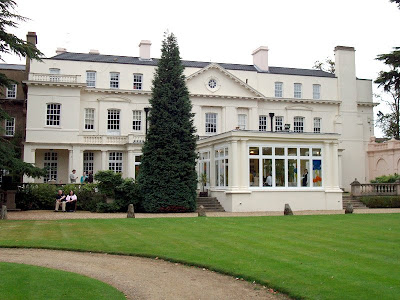 And Now For The News 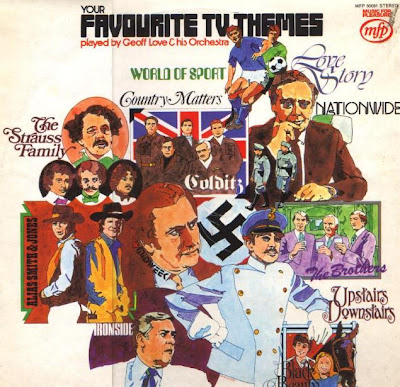 Two Current Affairs shows, two themes tunes - but, do you know which is what?

Apologies to international viewers, the under thirties, or anyone that may find these UK TV motifs as alien as Esperanto ...

The Good Word (it's 'official' title) - The Scottmen

I won't give any clues to this one -

There's a few more Geoff Love Plays TV Favorites here if your buzzed up for more TV type trivia..
Posted by Mondo at 7:22 AM 12 comments

We're Sorry, But We Cannot Return Any Pictures. 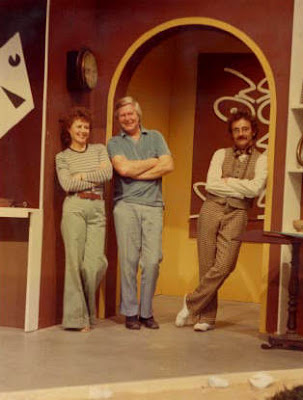 But a prize is given for those that are shown - RIP Tony
Vision On Opening Theme..

There's a mighty Vision On site, well worth a peep -right here 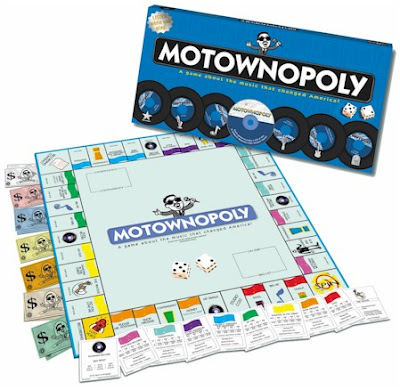 Community Chest - 'You've won second prize in a beauty contest. Move straight to frontman for The Commodores'
Motown has reached it's 50th birthday. It's officially middle- aged! So in celebration (or commiseration of the occasion), here's my hats off to Hitsville - where, rather than cracking out the usual classics, I'll roll out a few retreads of the Big Wheels of Motown..

Lee Moses thumps and thunders through, 'Reach Out' taking it to a new level of uptempo urgency

Lee Moses - Reach Out I'll Be There

Shirley Scott - I Want You Back

I'm guessing Ella was going through her 'mod' period (I've got a handful of her Beatles belters, and a Cream cover cut from the same swishery) when she cracked off this hipshaking take on 'Grapevine'

Ella Fitzgerald - I Heard It Through The Grapevine

Perhaps I'll post some genuine Tamla treats next week..
Posted by Mondo at 12:12 AM 13 comments

Well I'll Be A Funky Uncle 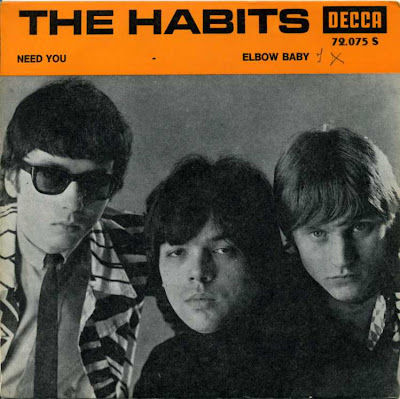 That's my uncle D in the shades

One of the musical tales rattled around at family gatherings and get-togethers involves  my uncle's sixties band, shrouded in whispers of - 'Hamburg gigs', 'meeting Mick Jagger' and 'having a single out' ..

I met up with Uncle D over Christmas, stumbled into the subject of his band, and decided to do some digging. Turns out he was the singer in a sixties band - called The Habits, whose career highlights include touring with the Stones, gigging with The Yardbirds, supporting John Lee Hooker and making one single 'Need You' produced by Steve Windwood and Spencer Davis. Incredible!

Even more bizarrely the B-Side (Elbow Baby) of their only single is track 20 on a Decca compilation (The Mod Scene), given to me for Christmas 2007 by mum, which has been spinning in my kitchen ever since.

Further to this they've got a micro-entry on AMG, and the single currently has a starting price of £3.95 on ebay.

Email ThisBlogThis!Share to TwitterShare to FacebookShare to Pinterest
Labels: 60's, B Side Babies, mod, Soul

What is Bocca Di Lupo ?

It's Italian for 'the wolf's mouth' apparently. And, also the name of The Wolfmen's mighty new blog making it's maiden voyage in cyberspace today, loaded with news, interviews and an early doors demo

Although if you're sensitive soul (or a raving Royalist), probably best to give it a swerve, as you may find the tale of a former Ants guitarist's carry-ons with a portrait of the Queen, which landed him (literally) with a broken wrist - mid Ant's tour, possibly a bit jarring.
Posted by Mondo at 11:02 AM 6 comments 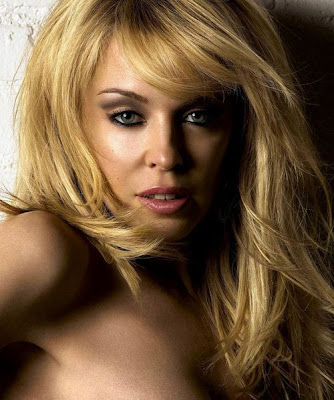 This may be (alright - IS), out of whack with yer typical FF posts, but what with the usual mood of grey, gloom and doom as the new year gets up to speed - a slice of space-age-sparkle-pop could be just what the doctor ordered.

As Marmite rightly posted, there's no shame in dipping into key period Kylie. 'Fever' for example is a scorcher with no duds, blanks or ballast onboard. But, aside from official releases, other golden nuggets can be dug from the early noughties era - pieces like, Soundhog's saxy rework of....

'Slow'
Any ideas about the backing track on this mashup, I'm stumped?

'On The Up'
(A 'Body Language' outtake, that outshines any other track on the album)

Paul Morley's univeral thesis of pop 'Words and Music', has this perfect piece of pop-swapping spinning (around) at it's centre.

And why hasn't anyone covered this tune. How mighty would a guitar version be? 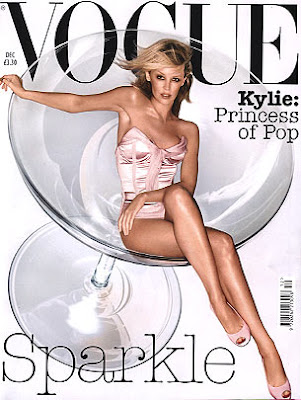 The Carnival Is Over 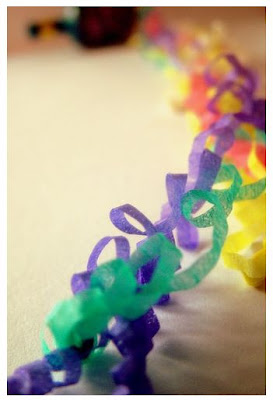 Hats off and Happy New Year - but, ho-hum what a heavy effort lumbering yourself back to the same ol', same ol' after a full two weeks of naught but loafing, lazing and lie-ins - however there is a way of lightening the load - simply soak yourself in the blue eyed soaraway soul of Bobby Sansom, who, has fine eye for a barnet, and the look of one of those rug-u-like photos used in Gent's barbers..


Normal service should be resumed by Friday
Posted by Mondo at 9:20 AM 12 comments