Gather Round For Rumors 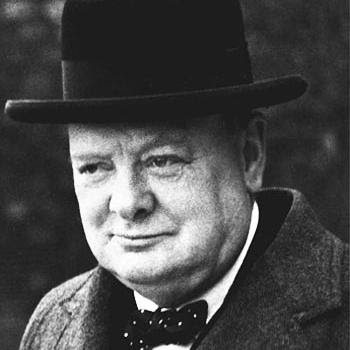 One of the tracks used in this winter collection was Gabe Durham's beautifully blended Beatles and Sufjan Stevens tune Yoko in Idaho a gentle melter that fitted the mood of the mix. Last week Gabe unveiled Rigid Rumors a set of eleven similar remixes that are more musical chairs than mashups and somewhere Radiohead bustle about with Dave Brubeck and Simon and Garfunkel, where The Swell Season, Sufjan Stevens, Biodome 5 get bounced around in bootleg blender. With a rock 'n' roll call which reads like this..

There really is something for everyone, and the cherry on top being - Rigid Rumors is entirely free and available for download at Gabe's blog Gather Round Children..

First You Reel Me Out

Oh. and don't forget to pick a couple vintage sparklers from Gabe's last batch of booties - here
Posted by Mondo at 9:04 AM 11 comments

Funky Friday - A Chip Off The Ol' Blockheads 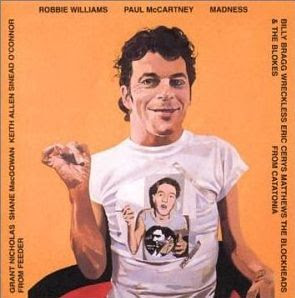 Artwork by Peter Blake - yes him of the Sgt Pepper cover
The Blockheads come to sunny Southend this Saturday, heading up a bill that features Camera Obscura and Billy Bragg's Big Busk (I'll be taking my Martin DX1 along for that. Although live music is just one segement of an all day arts festival known as Village Green, taking place in Chalkwell Park - literally a five minute walk from home.

Last time I saw The Blockheads dear ol' Ian Dury was still out front and on his final visit to Southend during the Mr Love Pants tour. For all their punk/pub rock roots and associations the Blockheads are really proto Acid Jazzers (fatback drums, squealy synths, soaraway solos and finger-blistering basslines) twinning the free form flow of Jazz Funk with the sweaty energy of Punk, and able to switch between either without missing a beat. They are simply the finest set of sizzling of musicians you'll ever see live. So if you're round and about Southend way this Saturday why not pop along - the full programme of events is available here.

And you can grab Macca's Blockbusting version of I'm Partial To Your Abracadabra right here.. 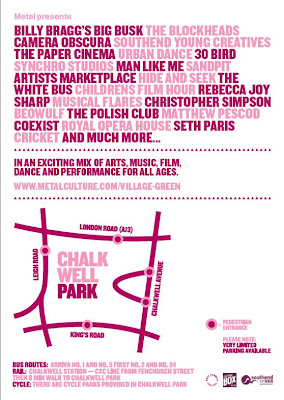 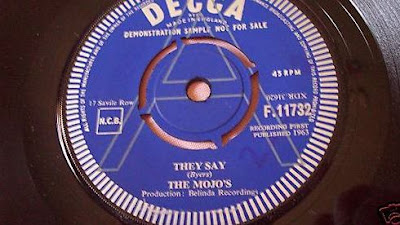 The Mojo's version of They Say - last spotted on Ebay closing at £21!

One of the earliest vid's logged in the blog was bouncy,bouncy Oddjob-a-like Rodge Martin's 1966 appearance on The Beat with They Say, but some ol' spoiler pulled it within a couple of weeks of my first peep. However, after a two year trawl I've finally tracked Rodge down again, so grab it while you can - a few notes though:

The Mojos They Say


Can you spot the early doors celeb in this 64/65 period Mojo's photo? 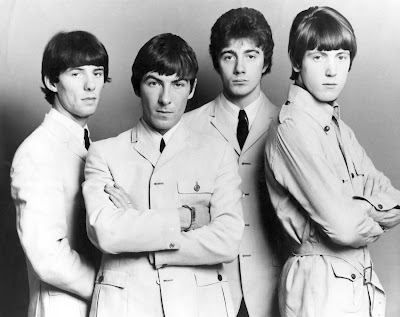 Funky Friday - Giant Steps Are What You Take 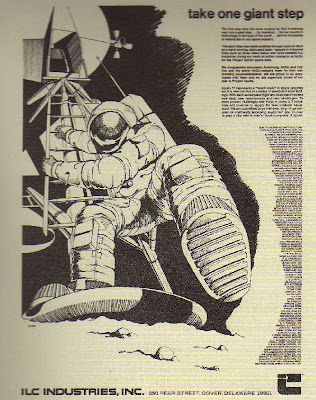 ILC made the original moon boots as used on Apollo 11

That for the all acid-headed, hippy, other-wordliness of the counter culture running parallel to Apollo Project, it was only the handful of level-headed astronauts flying in and around the lunar orbit between 69 -72, that had a truly trippy, out-of-this-world experience.

That Neil Armstrong is the coolest of cucumbers.

That with even with NASA's 99% safety rate, on a Saturn rocket made from six million components - that 1% still translates as six thousand parts which may fail.

One criticism though, for a book using the Apollo story as it's launchpad, there could have been less of what the author wore to the interviews, the condition of the motel carpet or yet another quote from J G Ballard, and more moon matters - perhaps structured by the sequence of Apollo mission's too?

Anyways I'm two chapters into Tom Wolfe's The Right Stuff, which hits home, heartbreaks and humanizes the earliest steps of the space racers - right from the opening sentence.

And on the subject of space books this is a must read for the scale, technical detail and timeline of events 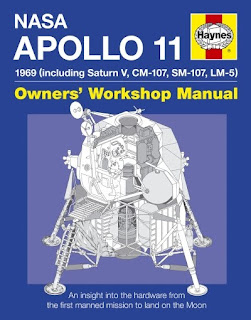 But enough of my ol' guff, get your moon boots on and let's start stomping.

All tunes removed by DMCA takedown

And as a bonus - Rico's reggae remake of the Star Wars theme.

Haven't seen this yet - but it's meant to be a corker. And any ideas on the song spun during the trailer? 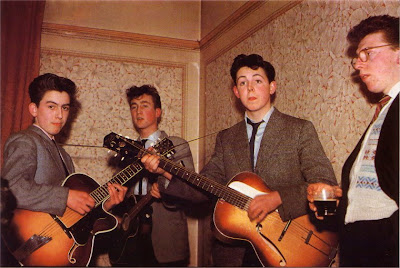 Endlessly dedicated Beatles nutter that I am, even I'm starting to slump and feel fabbed-out from the unrelenting ad campaigns, magazine covers and blanket coverage stoked up by the recent remaster releases.

Full marks to the NME* though, for effectively popping off a cribsheet for teens with the last issue (even if 12 cover variations has the specteral money-grabbing fist of Allen Klein about it).

And the principle of £200 per box set (of course you'll need both mono and stereo if you're an avid completist) seems to bruise the purity of the legacy. But let's forgo all that fru-fru and hear The Beatles raw, remix free and topping up their 'studio tan' as Zappa called it by way of some outakes, alt.takes and works in progress.

I'm A Loser (Take 3)
A lovely touch of fine-tuning the harmonies, before they kick off

*If anyone finds my left-behind copy of this (Hard Day's Night cover) on the C2C line any chance of handing it in at the lost property dept?
Posted by Mondo at 9:02 AM 17 comments

Email ThisBlogThis!Share to TwitterShare to FacebookShare to Pinterest
Labels: 60s, outtakes and altakes, The Beatles 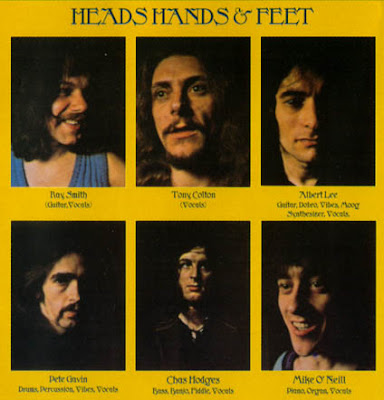 This week's Funky Friday brings you, what at first glance appears to be, a hair bear bunch of grizzle-faced ol' rockers and gnarly Catweazle-a-likes who've spent all night a'supping at the soup kitchen. But, have no fear these fuzzy faced funkateers are as gilded with 'the groove' as they are with beards, burns and barnets . Heads, Hands and Little Feat it is then... 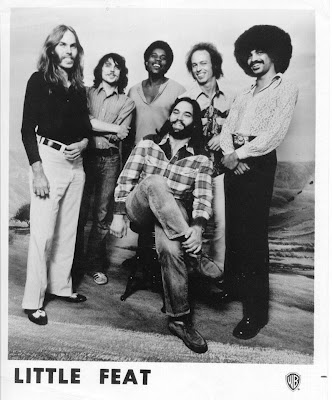 Followed with two chunks of funk from unlikeliest looking bunch of fatback-packers ever - The Average White Band - Hamish Stuart, he of the Azlan style ginger 'fro, (spottable at 0:05 in the first clip), later went on to work with Paul McCartney. Although he's made some strikingly bizarre claims against Macca since.

Now if these are that type of tunes that tickle your tastebuds, why not try an earful of Axe Victim's AXE FM Radio Download show for one full hour of quality cuts covering all points from hairy rockers to heavy funkers - you can check it right hair here
Posted by Mondo at 9:17 AM 12 comments 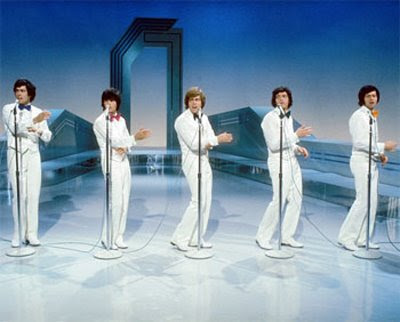 Osmo-disco
A tune that was this close to a spot in the last Podrophenia, comes from The Osmonds of all people, popping off a prime slice of discolicous doo-dah. Released in 1979 it sits alongside other light entertainers from this year (Johnny Mathis, Cliff, Barbara Streisand) who got on the good foot and boogied aboard the disco bandgwagon - PS - it's produced by Maurice Gibb

And while we're thumbing through the section marked 'Unlikely Disco Biscuits' how about this from 77 - Cat Stevens dropping, beats, bleeps and barks in what's generally regarded as the earliest example of an electro track.. 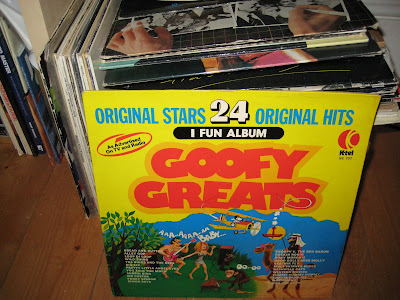 Surprisingly Funky - that's the for theme latest podcast from Piley and I. Ten tunes from players and performers who've stowed away some uncharacteristically fleet footed crackers in the catalogue.

But can you guess who's who before each tune ends - of course you can!

Amongst the usual bumble and banter we touch on - The Basildon Music Festival - 'Basfest', Ron Wood's Southend connections, Piley's Newsround and celebrity lookalikes including: him and him - him and her
All grabbable and listenable right here...

You may notice - the promise of a surprise at one point (a Radio One style Bits and Pieces quiz I'd planned for Piley), but soundwise, this section went a bit wonky . Rather than waste it - I'll embed here in case you fancy a pop at a summer themed Pop Quiz.. 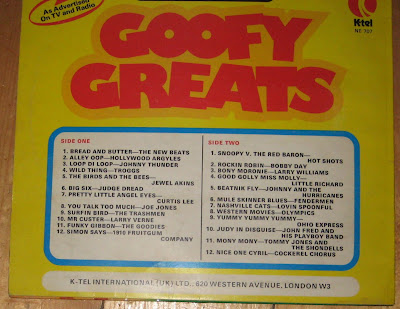 Last of the Summer Finds 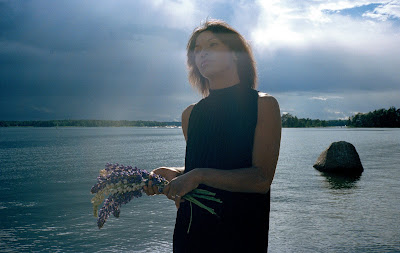 How's your blog-list doing? In the two years I've been maintaining my online allotment, (which I was convinced would run out of puff after a few months). I've really not blogged any of my most played faves (Small Faces, The Faces, Rod, Bowie, Bolan, Roxy, The Damned, XTC, John Martyn and countless comps). The trouble is - there's just too many many oldies, oddities, obscurities or tasty tit-bits of newness be logging.

Like - If This Ain't Love - a track that's been rattling about on my MP3 player for several months now, and a seasonally summery song that I'll squeeze in before the shadows get to long, the wasps get too giddy and grumpy (is it me or has there really been more of them this year?)

I only realised while pulling this post together, it's the same Nicole WillisCocktails posted about some while back

Nicole Willis and The Soul Investigators - If This Ain't Love