John Barry - They Shot, He Scored 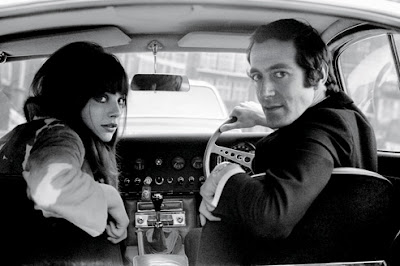 The Reaper's certainly set briskly about his grim business this year, carrying out a ruthless recruitment campaign - John Barry being the latest to get his call up papers

I never got round to reading  a John Barry biog although I've been meaning to for years. From the scraps I've gathered through other books - he seems to have led something of  a James Bond-ish lifestyle during the swinging sixties: King's road address, film star girlfriend and international swishing with the champagne and sports cars set

And what a body of work  from Bond to Born Free, Harry Palmer to The Persuaders. I'm no music theorist but -  his innovative instrumentation (using everything from cimbaloms to synthesizers), the scope of his widescreen arrangements and minor modal motifs - could pluck your heartstrings like a harp.

A personal fave is perhaps a lower known TV theme but distillation of the Barry technique and almost a companion piece to The Persuaders, a melancholy toybox style arrangement - opening the Orson Welles Great Mysteries TV show*....

*Previously posted here - but I think we can swing a re-up today
Posted by Mondo at 11:58 AM 14 comments 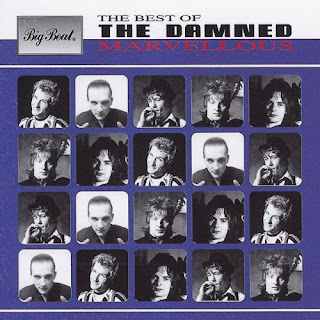 The two most recent treats (picked and played back to back) were alt-takes from ever-cherished faves The Beatles and The Damned, who, have more crossover and connection than you may initially think.. 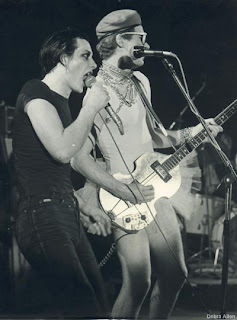 The Hard Day's Night sleeve re-jiggery , main songwriters starting out as bass players - Captain even played a Macca style Hofner violin bass in his earliest period, is also a dedicated Veggie and animal rights activist - then there's Help appearing on the B-side of first single New Rose, and the sideswipe at Lennon..Would You Be So Hot (watch for the powerdiddle drum fills at 1:46, the Santana style closing coda and some solid soloing from Cap')

But getting back to the tracks...both are faster, flightier versions of familiar tunes - whipping along with extra fizz, vim and voom!

You can see why, as Stuart Maconie reports in Cider With Roadies, he was stunned into submission and silence by this assault of battering ram riffs and rhythms.


Take 6 of The Word is a bouncier, beatier versh, which to my old lugs sounds ever so slightly sped up. That it's 15 seconds shorter than the official release may mean it has been gear-shifted up a notch...(full breakdown here Fab avids)
The Beatles - The Word 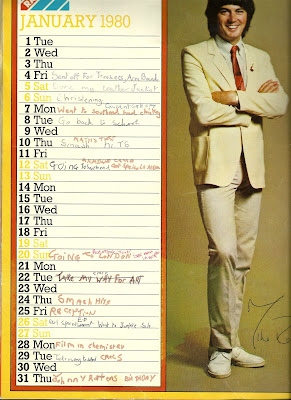 I'd forgotten, until seeing this Calendar, how much I hated the idea of shedding the 70s. And felt, as the 80s loomed into view like a sky-high iceberg - that in one crash and midnight-click of the clock the amazing technicolour, Cinderella 70s would be gone forever..

Sure enough, for years they were unfairly reported and revisited as a dated and desperately unfashionable era 'The decade that taste forgot' and similar baggy mantras - like any other decade didn't bring it's own stylistic horrors and howlers?

Anyhow, so onto the 80s. Jumble sales (26th ) became a rummage-hunt for skinhead and mod mates rooting about for Fred Perrys, Ben Sherman or Brutus shirts and red tab Levis. Although at this one if I remember, a giant-sized, monster spider leapt out from some old scrap or other, scuttling around and about like severed hand - sending DM booted skins, mods and punks reeling backwards, nimble footed and fleeing smartly doorwards... 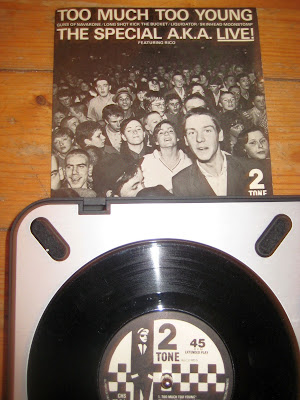 Singles wise it's only The Specials to report, but as I'm sure you know what that sounds like and LPs begin to appear in the diary, I'll  pitch in links to the album charts - this week includes: Cozy Powell, The Fawlty Towers Original Television Soundtrack, Peace in the Valley, The Ramones and Nolans !?! - and perhaps drop in occasional album tracks like these two sex and violence songs..

No LOTR news for Jan - but this Specials skit could have been written especially for her.

Another tune that chimed with the times of inter-tribal punch ups and kickings that happened to several mates, but luckily I managed to avoid..

The charts for this week are well worth a squint. A mis-matched batch of unlikely bedfellows sharing the same slots and spaces almost high rise style: Fiddler's Dram, Rupert Holmes and Mike Oldfield's Blue Peter Theme bunched up like resentful tenants alongside The Clash, The Specials and at number 41 Prince !!! Well I never.. 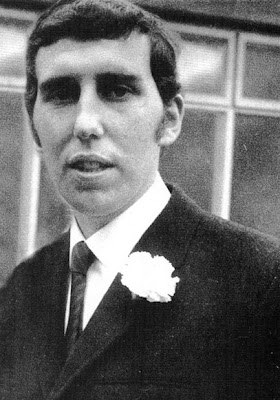 He discovered Donovan and produced Crocheted Doughnut Ring (see below) - but who is he? Find out in Podrophenia 12...

Dr Feelgood, Depeche Mode, The Horrors and My Life Story are just a few of the local legends appearing on the playlist for the latest Podrophenia as Piley and I Celebrate Southenders, local slebs and sea-siders  - casting our net from next door neighbours to neighbouring boroughs no more than five miles away. There's all the usual babble, rabbit and jabber covering: late night burger vans, local  venues, celibacy, the secret of Wilko Johnson's suits and which one of us was once a Video Man?

Podrophenia 12 (DL link is at the bottom of the page)

Southend's legendary record shop Golden Disc: location  for this Mozza vid' and star of it's own song - which, gets a spin up in the podcast 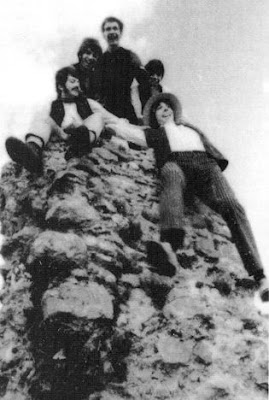 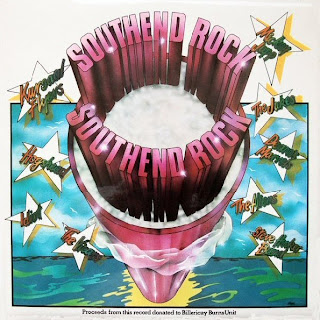 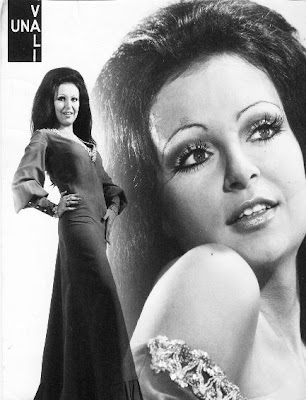 I had my first earful of Una Valli's Satisfaction while sifting around and about Spitalfields Market last year. Thumbing through the odds, ends and trendy titbits - the tail end of this tune boomed out like a funky foghorn calling me towards the record stall tiptoed and nose-first like Tom and Jerry reeled in by a steak on a clothes line....

It turned out to be just one nugg' from She's a Heartbreaker - UK floor fillers Volume 4. Luckily I managed to the grab the last CD on the stall. Since then Satisfaction has been on perma-repeat without losing any of it's first play potency and for my Krugerrands is an even bigger belter than last Friday's Barry St John tune 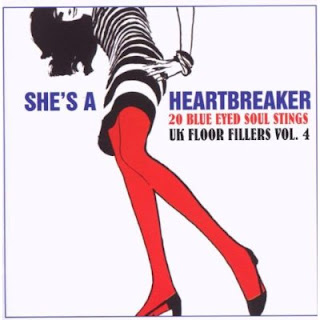 Compiled by Friday's guest blogger Nick Saloman
Posted by Mondo at 7:13 AM 8 comments

It's our first guest blogger of the year. Firing up a hand-picked playlist of his favourite soul, rock and stoner tones is Nick Saloman: main-brain and multi-instrumentalist behind psych-rockers Bevis Frond, star of TV's Countdown and compiler of Psychic Circle's albums including the excellent Instro Hipsters and UK Floor Fillers series, so let's tuck into this handful of musical, magical beans.

Barry St. John - Turn on Your Light: I only discovered Miss St.John relatively recently. A Glaswegian soul girl who cut a string of great 45s and one brilliant album called 'According To St. John'. This single is also on the album.

The Flies - I'm Not Your Stepping Stone: I bought this when it first appeared back in 1966 in National Radio in St. John's Wood High Street. An absolutely fantastic slice of raw fuzzed up freakbeat from Ilford!

Dave Crosby - Laughing: My favourite track off the amazing If I Could Only Remember My Name album. Stoned out bliss direct from the Laurel Canyon hot tub of your mind!

Patto - Loud Green Song: On which the incomparable Ollie Halsall plays some of the most incendiary guitar ever put on vinyl. Definitely to be played at my funeral!

There you go no Beatles or Jimi which I have to confess is sacrilege as they are my two favourite artists of all time. But I was trying to make it interesting.

A big psych-salute is due to Nick for his help with this. Coincidentally he'll be back on the blog via a Dear Diary entry later in the year. However - should you fancy catching him in action - he's backing Debbie Duveen and The Millbanks at the Hoxton Underbelly on January 26th - details here and here 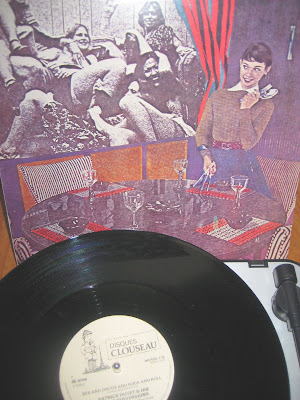 A new monthly feature starts on the blog today 12 by 12. Twelve 12" singles posted by 2012. You'll know most of them - not that I'm entirely sure what 'most of them' will be yet. But it's a playlist that's sure to shape up with a few extended rarities, oddities and possibly, in some cases - classics..

We'll kick off with a 1979 double A-sider bagged just a few months back - Patrick Duvet, who, until last week I thought was Patrick 'I Love America' Juvet: the whispy-pitched, dungaree lovin' Friso-Disco star. Apparently not though...so any info on this Patrick (Duvet) please shout!

My guess - he's French: Disques Clouseau label and sleeve notes en francais.. and is it me or would these two tracks make a perfect fit for some Scissor Sisters style swishery...

Me and my SHADO 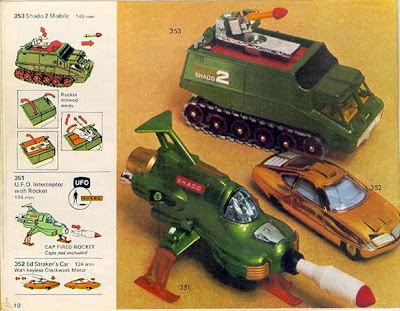 Did you ever have a Dinky Interceptor ?
Now, I'm not typically given to Fortean type mysteries and mumbles - but wouldn't it be just smashing if,  ex-NORAD bod Stanley Fulham's predictions of ....

A. There will be a major UFO display over Moscow between the end of the first part
of January 2011 and the second week of January 2011.

B. Followed by a major display over London approximately seven-days later.

Actually came to hill of moonbeans - with some silvery outer spacers a'hovering Dr Who style over London town...(Perhaps similar to the flying Dorito seen looming over Red Square). Unless of course, it's the style of green-skinned, contact wearing omni-bothering space bandits that gave Ed Straker and his SHADO chums such an almighty run around...

To his credit Stanley is the same chap who predicted 'UFOs' over New York on October 13th.. last year...

Two versions of the UFO theme in this clip...

Why not nip over to  London Lee's  for a few more ET tunes...and as a bonus lend your lugs to Tom Middelton's walloping War of the Worlds remix 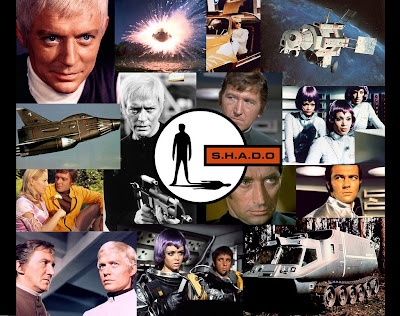 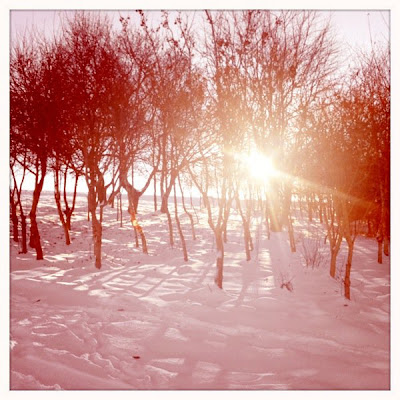 Photo by Clive Parnell
Happy New Year all you bloggers and browsers. Stepping softly and slowly into 2011, how about a couple of nicicles to add a frosted glaze to the goings on: two Teutonic tunes from art rockers Neu! - fitting the fluish, foggy mood of the mo'

The brisk, beaty and wintery instrumental of Isi (with an under-bubble of Deck the Halls) is something that soundtracked my slippery steps to the station and back during last January's drifts.

So far I've only got Neu! 75 - so any recommendations on where else to dip into the Krautrockers catalogue would be much appreciated
Posted by Mondo at 1:22 PM 18 comments