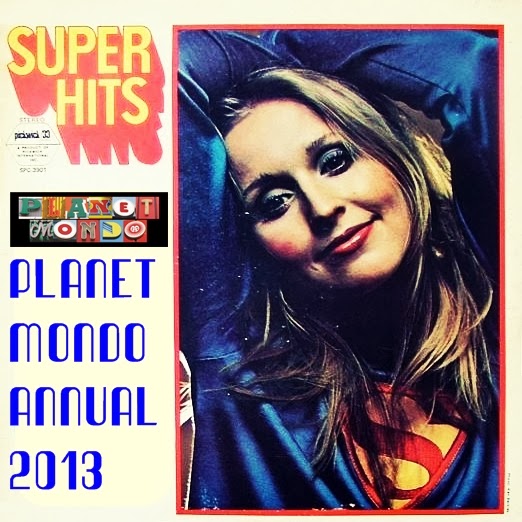 Boys, girls, inbetweeners and whatnots - here for your listening ears and grooving legs is the Planet Mondo Annual 2013, prepared for the festive Sadlads CD meetup of Piley, E F Rice, Jack Gestures, Paul Glasses and self. To recap on the rules....

1. Circulate to everyone a CD no longer than 80 minutes in length, containing tracks for new groups you have either got into for the first time this year or established artists you have perhaps picked up an old track/album for this year.

2. You may have more than one track for an artist on the CD (although 80 mins of Springsteen would be pushing it)

3. You supply all those taking part with a CD including a full track listing.

So what has 2013 pitched into my PM playlist?

The full list is below, rendered as a screen shot to avoid those pesky DMCA types... click on the pic for the complete t-list 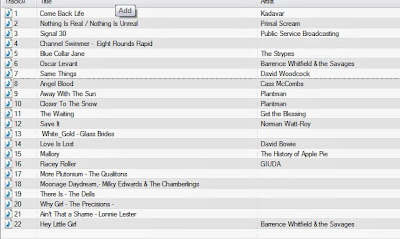 During the 70-ish minute mix - listen out for appearances from Steve Lamacq, Edith Bowman and Courtney Taylor-Taylor. The PM Annual back issues can be collected hereabouts - except the 2012 edition, which will be wing-dinging its way to us soon-ish

So until then have yourselves a rocking New Year, and perhaps use this mix for prepping music should you be Hootanannying or Hogmanaying it up tonight...

PS one on the subs bench - a Breaking Bad related beauty

Christmas Sunday Sessions: Some blues-blasting, a Beatles convention and a sack-load of new tunes 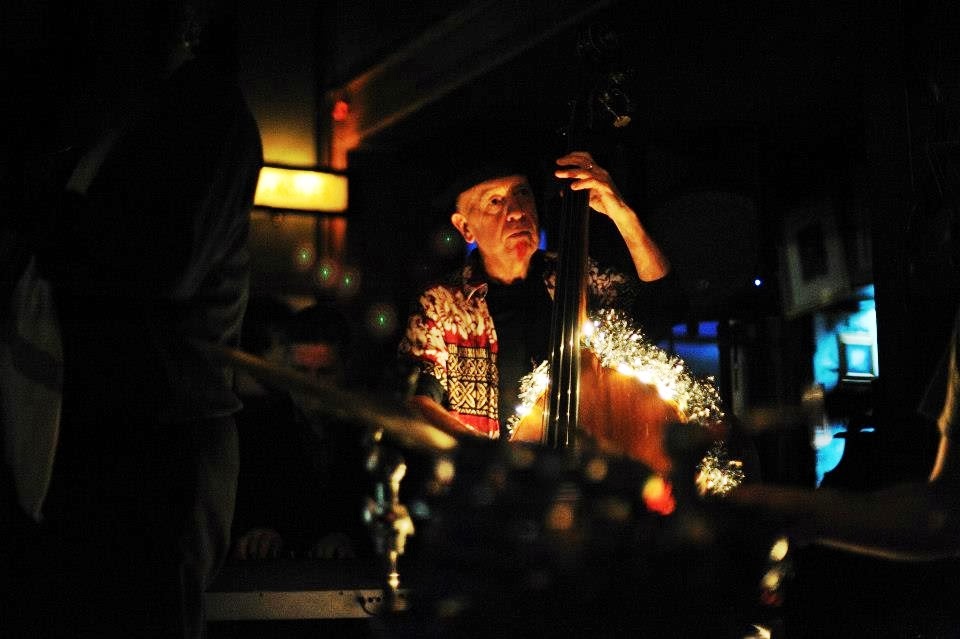 Boys, girls, grinches and humbuggers, roll up, roll up to Southends Railway Hotel for the last Sunday Session of 2013. A three walloper that includes.....

Martin McNeill * Bottletop Blues Band in the bar, with guests Tim Huskisson on and Steve West Weston on harmonica

A grab bag of fruity newly discovered treats and tunes, with some seasonal Beatles and funky nuggets nipped in from me before during and after the band....

A Beatles convention upstairs, with a parade of Southend's finest playing their way through the Fabs songbook...

This is my last post for the year, back in 2013 - with the usual whatnot and waffling - so see you then and have yourself a jumping, jiving Christmas and new year yardbirds... 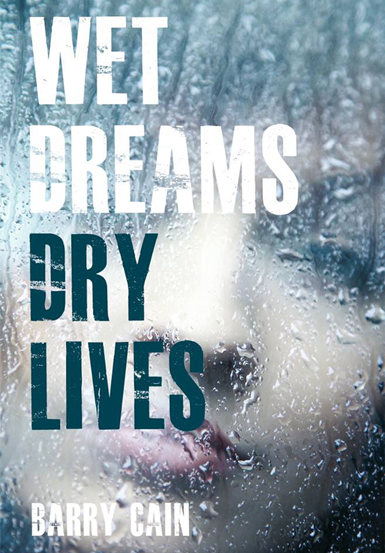 Confession - I'm addicted. I haven't been this addicted for weeks. Since ploughing through all five series of Breaking Bad in a fast and furious few weeks recovering from a broken shoulder. So what's got itself lodged and circulating under my skin, spinning around like a runaway tube train? Barry Cain's  Wet Dreams Dry Lives

What a piece of work. A cat's cradle of closets and skeletons, secrets and affairs, families and fortunes. A 'just one more chapter' read (where one more chapter becomes another chapter - and repeat), looping through various levels of hell, heaven and dark heartbreaks. A perspective shifting, line blurring blast of a book - twinkling and teasing with sex, drugs and shock 'n' roll

A story about an infatuation that leads to madness. About a man murdering his father and his son before killing himself. About the joys and horrors of sex. About jealousy and hate and love and depravity. About the sadness of time and the hunger for survival. About gangsters and perverts and condos in Los Angeles. About the desire for fame eroded by the desire for drugs. About decapitation. About dreams coming true and schemes to untie them. Or is it…? '

Incredibly this is Barry's first novel, but, comes free of the Bambi-steps and unsteady treading typical of yer usual debut volumes. Instead it pings along with the upswing and spring of Gene Kelly (or Alex Droog) singing in the rain, and is written so exquisitely you're almost re-reading each line as you soak in every sentence .....

If you're a recovering Badaddict looking for something to fill the hole left by BB. Dig in here, It's yours for just £1.90. 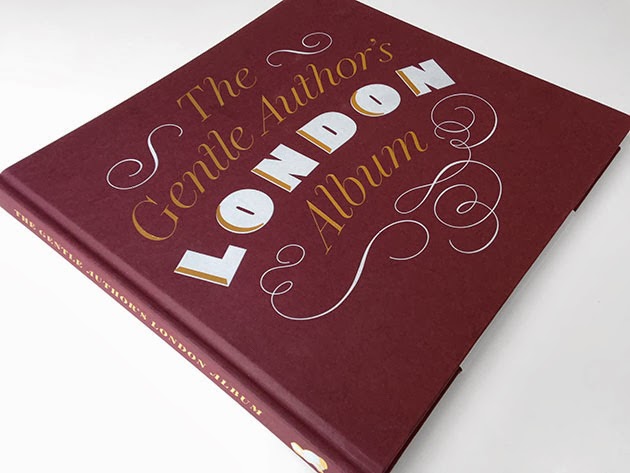 From the non-fiction section -  let the Gentle Author take you by the hand and lead you through the streets of London, stopping off  to view parks, desire paths, people and byways, by way of the London Album..

Parked up and posting on a daily basis over at Spitalfields Life, the Gentle Authors has curated a compendium of the capital from 600 (mostly unseen and unpublished) pictures: Elizabethan graffiti in the Tower of London, Victorian Spitalfields nippers, Bob Mazzer's London Underground photographs - and hang on, who's this popping up amongst the Pellicci portraits...(full story here, along with a dandy Kevin Rowland portrait) 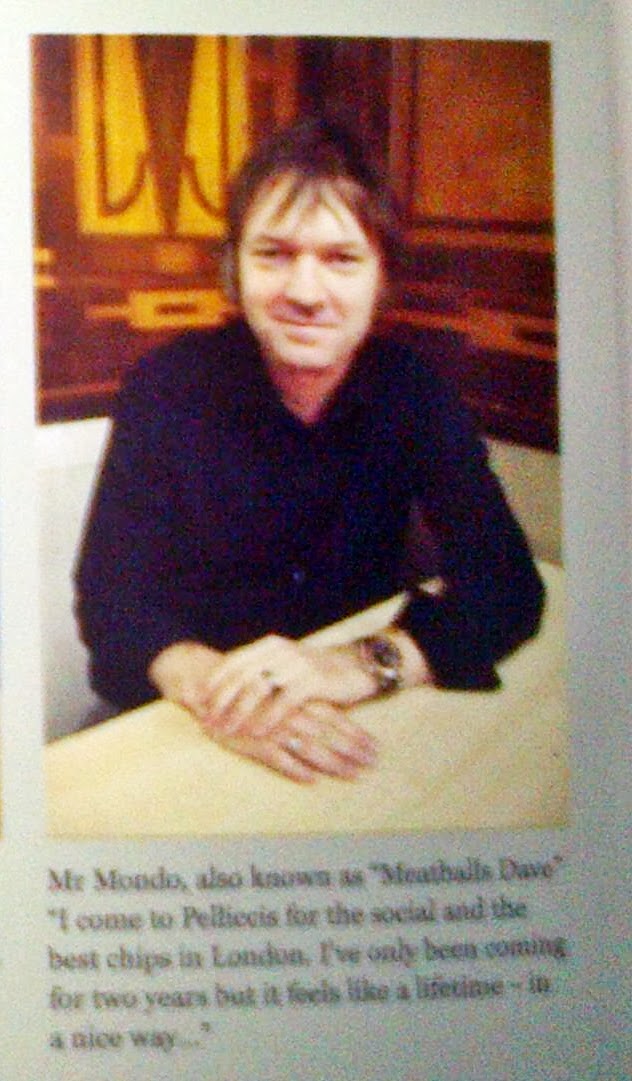 My family were all born and bred Londoners, and I may be an Essex boy now, but was actually born in Kentish Town, before migrating east with my parents. Both mum and dad have been gone for some years now,so it's an honour and a privilege to appear as one of the many lives in the London Album...

One Chord Wonders, Eight Rounds Rapid, Podrophonic double-decking and a visit from Wilko. 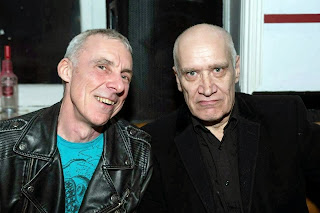 We really do get the best guests, bands, boozers, dancers, photographers and audiences at our Podrophenia bashes. Saturday the 7th, was another hat-popper of an evening with assorted Southenders coming together and mixing with London callers all collecting together for the Retroman, Southend Punk, Podrophenia team up of ... 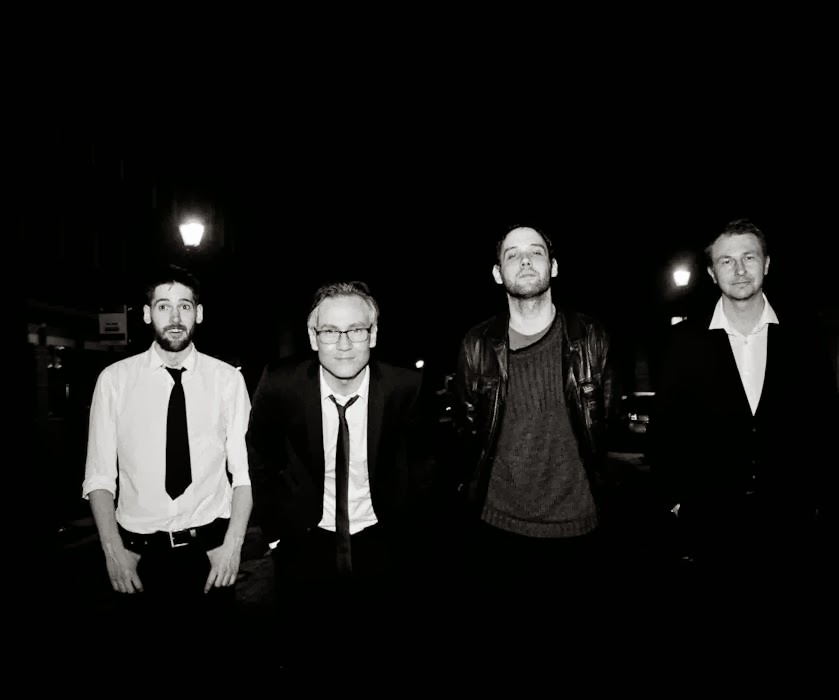 Eight Rounds Rapid: who powered through an atom-splitting set of fan faves and new tunes (Bully Boy, I Want a Drink) like an Estuary-fed rhythm 'n' new wave groove machine.

After run of dates playing to 3000 gig-goers at Koko and similar size venues around the UK, 8RR's presence and power has bulked up Bruce Banner/Hulk style to the point where there's almost not enough stage for the band's skittering, riffs and rapid fire attack. And what a way to encore - with limited edition single (Podrophenia Records) Writeabout... 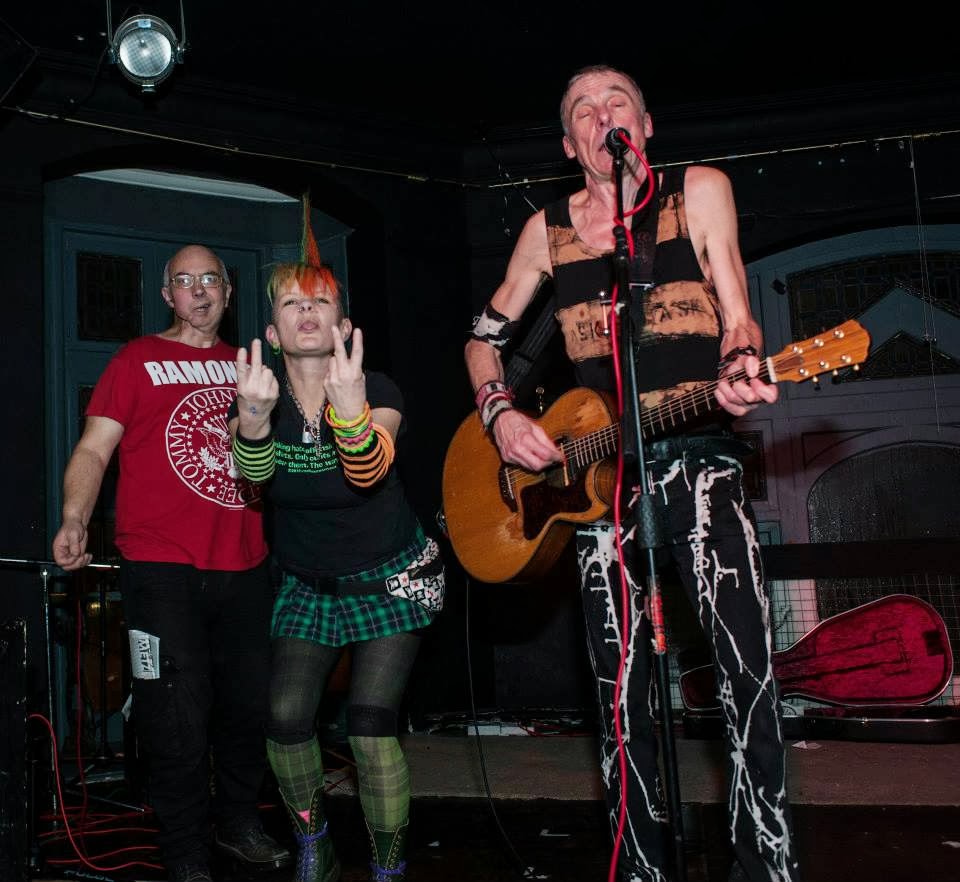 TV Smith's: third innings at The Railway was a crowd rousing reunion at one of his favourite UK venues. A pure and practised pro, TV kept the crowd onside while working through a string break, managed to wing in a Christmas song, finished his set backed by a Southenders stage invasion and pulled in soundman Duncan Leslie for a duet on his One Chord Wonders encore.

Downstairs, post TV, Piley and self span in a selection of Podophenic mixtures. disco, funk, garage, mash ups, covers and ska eventually wrapping up at 1am with an improve sing-along to Prince Buster's Enjoy Yourself by the Rail(way)-voice choir... 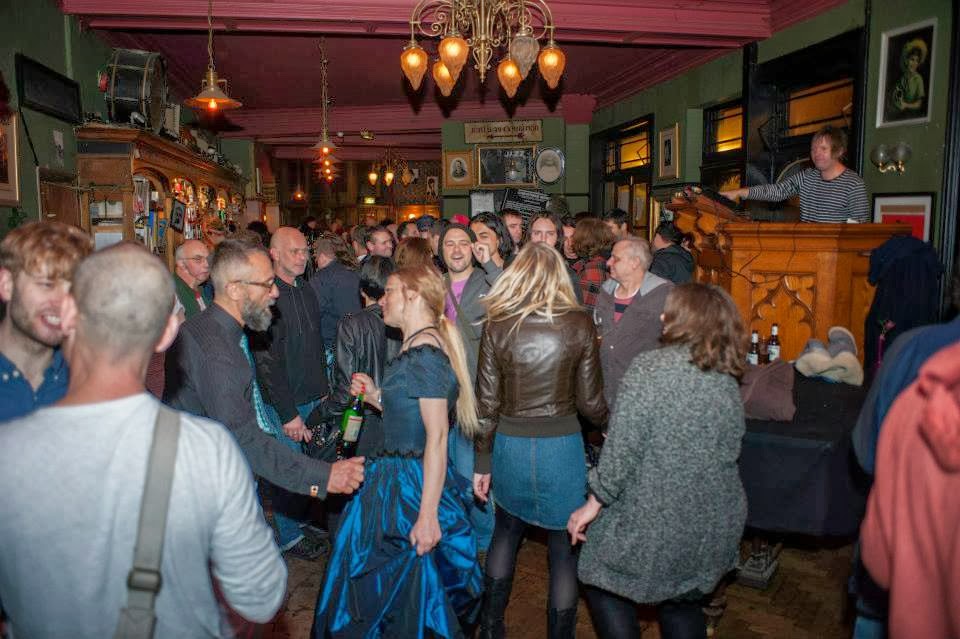 Song of a preacher man - Podro a go-go

A huge thank you is due to anyone who raised a glass, shook a leg, took a pic, played a note and generally joined in with the most spectacular of Saturday Night shakedowns....
Posted by Mondo at 9:48 AM 0 comments 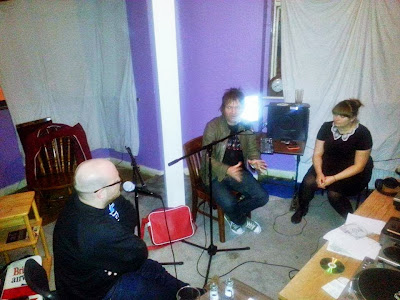 Fill your boots, fill your ears and gather in your winter fu-el with the latest Podrophenia - our last radio run-out of 2013. A selection of seasonal sounds fitted around the motif of winter

Sparking new music (Glass Brides, Plantman), 60s psych, rarities, out-takes, covers and a grabbed chat with Luke Mersea of the Glass Brides.. (Luke on the left, me in the mid, Kate Johnston to the right - upstairs in the Crows Nest at Shipful of Bombs)

It's all here - and all yours for free. Pop it on your pod via iTunes or load up below shipmates 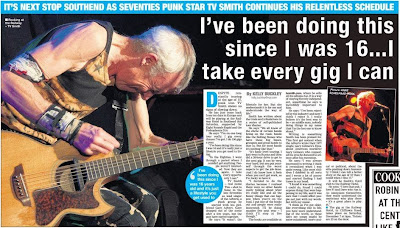 What a team-up, what a tear-up, what a two way split of Saturday night flavours are due at Southend's Railway Hotel tomorrow night. Why?

Put together and promoted by Retro Man, Southend Punk and Podrophenia - the evening's bill of events opens with Eight Rounds Rapid's returning to Southend after a snatch of London gigs and a slot supporting Wilko Johnson at Koko..

8RR have had a glowing year, gathering nods and noises from reviewers, record shops, radio presenters, and - have been voted as one of the best bands of 2013 by David Quantick.

Returning for a third visit to one of his favourite UK venues - TV Smith. If  you’ve ever seen TV at one of his solo shows you’ll know you’re never left feeling short-changed by his performance. Every syllable is deployed at full trajectory, as is each wrenched sweat-bead and shred-throated vocal.

Confessions, observations, opinions and solutions are are delivered with sharp eyed acoustic analysis. As TV said in an interview this week with our local paper The Echo 'The industry rejected me, now I'm rejecting it, and I can tell a better story at the age of 57, than I could at 17'

Post bands Piley and I will be slinging in a mix of Podrophenia favourites and floor-fillers until 1. Come on down, it will be a belter... If your winging your way down sign up here