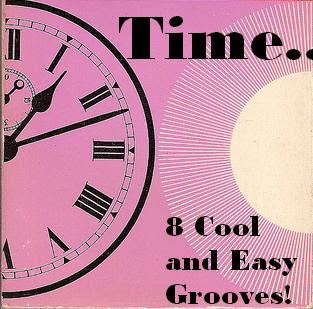 Hurrah for bank holidays and short weeks – in fact, I’m getting in the mood of the moment by giving myself the day off and handing over to Budd Schifrin – who has kindly rattled up an 8 track mix of the zingingest, swingingest selections, as free and easy as a Riveria affair. You can catch all of Budd’s mixes and imagined soundtracks at his blog… Jazz, Funk, Lounge and Library grooves.

Hi!
I started my blog in February and this is now my 20th post. The posts relate to my love of jazz, funk, soundtrack, Latin and lounge/library grooves. All have a theme (such as cinematic vocals, electric piano, wah wah Latin grooves, mellow flute etc). When I was asked by Mondo to do a Funky Friday guest spot how could I refuse! I have been following his blog for some time and dig the mix of music and commentary.

For the mix, I have tried to give you a taste of each comp I have done so far (groovy or cinematic vocals, lounge/easy and soundtrack grooves). The theme which links them is ‘time’. (I am a bit obsessive when it comes to this topic being an avid vintage watch collector!)

The first track ‘Funky, how time can change the meaning of the word’ is a hilarious look at what ‘funky’ is/was! The next track ‘Holiday Time’ is a funky mellow lounge classic! It’s performed by Hildegard Knef. If you like this saucy German vocal then look out for the tracks ‘Berlin’ by Heidi Bruhl and ‘Easy Evil’ by Frits Kaatee and Jeanette Corde. However, if you’re not fond of ‘Ze German’ accent (Heaven forbid!), then try the Gian Franco Pienzio tune on my recent ‘Piano Party 2’ comp. It has a similar (but instrumental) vibe to ‘Holiday Time’. The next two tracks , ‘There was a Time’ and ‘Injury Time’ are great piano and sax tunes.

‘Time on my Hands’ is a beautiful cinematic vocal. It feels contemporary, like Tracy Thorn from Everything but the Girl could have sung it. I never would have thought it came from 1972!

Next up is ‘Time’ by the Ju-Par Universal Orchestra. It’s a wonderful breezy vocal track, funky and easy. ‘Time to Love’ is a gentle flute gem with great orchestrations. Finally, ‘A moment in Time’ ends the mix with a great summer sounding orchestral tune with wah wah guitar!

I hope you enjoy the mix, remember - we have all the time in the world!! 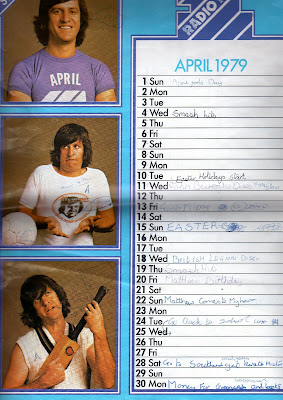 It's the return of 'Urcha' - Son of Urcha perhaps? Bit of a dry month entrywise, apart from new jeans, a karate poster (still in my mum's loft: the poster, not the jeans), one lost pound and slow down in the disco business.

Strangely, several of the tunes from this chart were bought but not captured in the calendar (Pop Muzik and Lucky Number were nearly, but not quite bagged too). So what Pick of the Pops should we go for..

Silly Thing - well, we had the Pistols last month
I'm an Upstart - too rowdy
Cool For Cats - strong possibility of getting blog-whacked
(I had a DMCA takedown last week)

Meaning it can only be a reworked theme tune that is an urgent anthem for teenage tear-ups.. 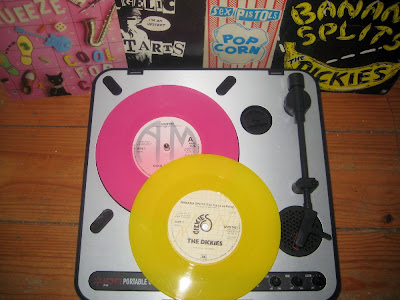 If you noticed Chic's I want your love in the chart above, there's a reggae refit right here if you fancy grabbing.

PS the ghost of Malcom McLaren haunts this chart. 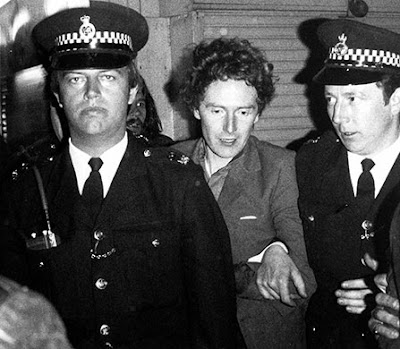 "My name is Malcolm McLaren, I have brought you many things in my time" Malcom introduces himself in The Great Rock 'n' Roll Swindle

Given a multiple choice of Malcom McLaren's talent and character, where do you place a tick: genius or jinx, myth-maker or manipulator, situationist or self publicist? The correct answer is - all of the above.

McLaren's early history is one of fractured families, student riots and art college sit-ins. In 1971 he opened a profitable outlet for his outsider stance through the most English of institutions - shopkeeping. Kicking against the trends of glam, hot pants and heavy rock, McLaren, and girlfriend Vivienne Westwood, sold fifties outfits and rock 'n' roll accessories to Teddy Boys and bikers at the wrong end of King's Road (430: formerly the site of Hung On You, Mr Freedom and Paradise Garage) nestling like a neighbour from hell next to the Chelsea Conservative Club. 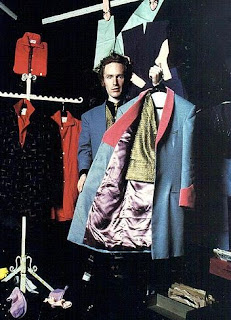 Three years later they refitted the shop as SEX, retailing rubberwear to suburbanites and creating a catalogue of inflammatory imagery that brought police raids, confiscations and later an arrest for wearing the infamous two cowboys shirt in public. Still at 430 King's Road, Seditionaries: Clothes For Heroes opened in '77, with a collection consolidating all that had gone before: rock 'n' roll and cultural icons reformatted in shock-horror collages, under-the-counter imagery posterised in cartoon colours or stenciled with situationist slogans - and adding spiky new lines: tartan bondage suits, long sleeve muslins, Spider-man boots and parachute shirts. 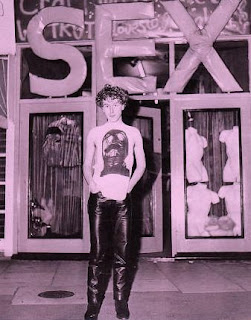 By the mid-seventies, following a brief period managing the New York Dolls (dressing them in red patent leather and hammer and sickle imagery), slow-shifting whispers about the hate couture on sale at 430 King's Road drew new blood to the shop, becoming something of a club house for a handful of bored teenagers. And, like a dayglo Fagin, McLaren focused and stoked this shapeless momentum into a movement of Molotov cocktail combustibility. When punk, the Pistols and all hell finally broke loose, it was just another chapter from the McLaren scrapbook of anarchy, chaos and controversy, but a chapter that perhaps overshadowed his other hits and highlights..

Designing the costumes for That’ll Be The Day

Breaking Hip Hop in the UK by way of Channel 4 'Tube' special. 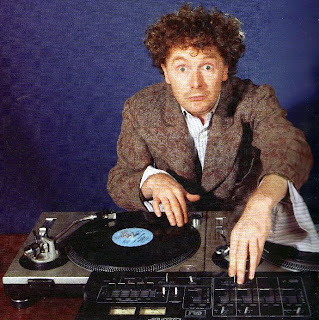 Whatever you're take on him is, the fact remains, McLaren was a career subversive, a serial situationist and a repeat offender - before, during and after punk. His real skill was technique more than talent, mixing and matching mediums - film, fashion, politics and Pop Art - although music was always a key ingredient (just lend an ear to the SEX jukebox). Whether dressing New York street-toughs in red leather, London bovver boys in Destroy shirts or discovering adolescents in launderettes and Harlem based break dancers - mixing street level chic with with art school concepts for maximum publicity was his signature style. I'll leave the final word to Barry Cain, who worked with McLaren on his (still unreleased) autobiography.

"He’s the Brian Clough of pop who should’ve managed England. Knowing Malcolm, I think love got in the way – he’s an incurable romantic. But we should all be thankful he turned the world dayglo"

The New York Dolls - Red Patent Leather
Recorded while McLaren was the Dolls manager and taken from a live set that also includes Something Else later covered by Sid Vicious.


This really is a marvellous, marvellous piece of footage. Taken from the Dress For Pleasure documentary it uncovers SEX's bread and butter customers. Watch out for the chap who looks like Stanley Unwin, casually chatting at home in his black rubber number.

No Future: Sex,Seditionaries and the Sex Pistols
Posted by Mondo at 11:07 AM 11 comments

What a week *sighs* of lazy loafing and sunny strolls around Stow-on-the-Wold. Where, bolt-holed away from the usual rush and bustle, a seven day stretch-out feels more like a fortnight. Highlights of this trip (our 9th now) include.

An improv tour of the Cotswolds Brewing Company - beer literally brewed in a barn.

And Puffin Annual Number One found at Evergreen Livres

Just one low point. A £3.25 scotch egg from Daylsford Organic which tasted only of reformed cardboard and Gloy.

If you're ever heading that way, two new(ish) tunes perfect for rolling around the wolds are..

Although track of the trip had to be...

Album of the week being
Posted by Mondo at 3:40 PM 12 comments

Podrophenia 9 - Riddle Me This Pop Pickers

The Fenchurch Flyer leaves Southend at noon. It travels west at 60 kilometers per hour with a following wind. One passenger has 3 apples in one pocket and 2 oranges in the other

Q - what should he be listening to on his iPo'?

A - Podrophenia number 9! (DL link is at the bottom of the page)

A pod-quiz where Piley, myself and assorted text guests have a pop at cracking the conundrum of two mystery mini-motifs (one from Piley, one from me) over a playlist of ten tunes. Why not tuck in below and see if you can out-noodle the collective think tank that is Team Mondo:Tronik Youth Marmite John Medd 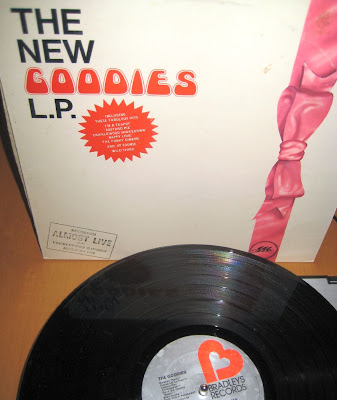 You may have spotted the 'man eaten by lion' doodle in the last post, a scribble entirely influenced by two of my compulsive pre-teen reads: The Goodies File and The Goodies Book of Criminal Records (along with the regulation Python books)

Almost the missing link between The Monkees and Monty Python, I've never become bored of The Goodies at their best. And even now, my two tots drip fed on a digital diet of untold rolling, scrolling satellite channels and rapid-fire, multi-format entertainment, regularly ask for an episode of The Goodies..

So what a result then to bag a copy of their New LP for just one Earth pound in a local vinyl shop (Genie, Leigh Broadway). Untypically for TV comedy albums it's not all sketches, skits and sound effects. No, no,no - some slinky 'Superstition' style riffing can be found amongst the comedy songs - putting the fun into funky.

The Goodies - The Cricklewood Shakedown 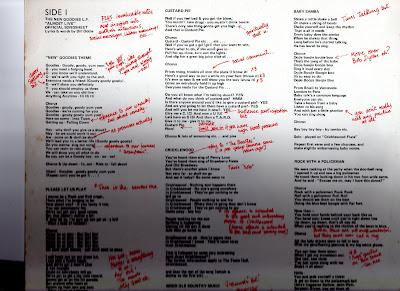 PS does anyone know what The Goodies Spangles style font's called ? I'm gagging to get a copy..
Posted by Mondo at 10:05 AM 20 comments