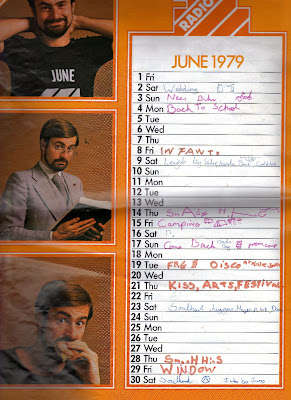 Did I ever tell you my The Day I Met Paul Gambo (George Michael, Limahl and Leee John) story?

A new bike. Not brand new - but some crazy arrangement built by and bought from my biker neighbor: a combo of racing frame, chopper handlebars, banana seat and an easy rider back rest towering as tall as my neck - a snip at 20 notes

The annual School Arts Festival featuring a one off appearance of our KISS trib’ band (read miming to Detroit Rock City). Paul Stanley if you’re asking.

The Radio Luxembourg Roadshow rolled into Southend. Where, hurrah and hats in the air - I took first prize in the Bits ‘n’ Pieces pop quiz, walking away (age 13) with a crate load of Crocodillo sparkling wine. A few bottles, but nowhere near the full compliment of all 24 made it back to mum and dad’s drinks cabinet if I’m honest.

The last week of June's chart looked like this with singles bought being: The Skids and UK Subs (did I ever tell you my The Day I Met Charlie Harper story) I’m guessing the Anarchy logo is a hidden symbol for Anarchy in the UK (probably as I was still slightly guarded about coming out as a punk fan to my parents). 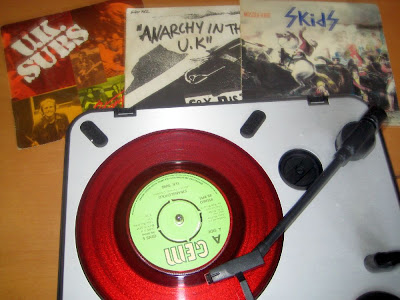 The Johnny Rotten Juke Box Jury (30th) incident can be viewed below, and the press cutting is taken from my scrapbook previously seen here.. 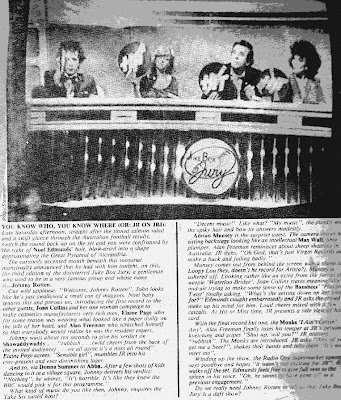 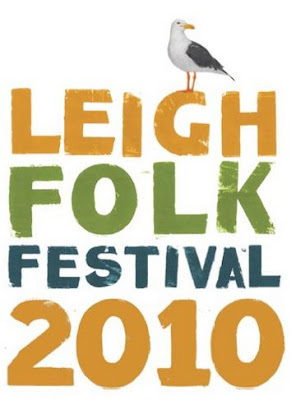 Staying with this week's rhythm of celebrations, shindigs and leg-shakings, the Leigh Folk Festival reaches it's peak this weekend, with a bulging menu of music and events.

Saturday is nicely polite, Think: Pimm's, picnic blankets and hampers in the Library Gardens. A micro-festival with side-stalls selling real vinyl records and second hand book bargains, a finger-licking veggie barbecue and live bands folking about in the background - all this and a sea view through the trees. Perhaps this year, I'll try Piley's tip and stick to the Festival Strength Cider to avoid a replay of last festival's alcoholic wobbles and cycling home sideways. 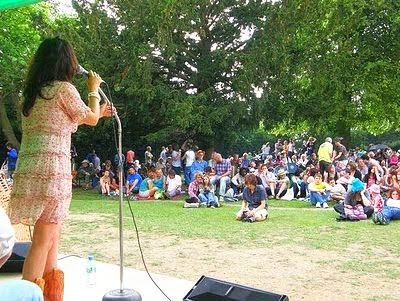 Kelli Ali plays the Library Gardens last year
Sunday it's all going on down Old Leigh way, and a the perfect day to wander around the wharfs, pubs and cockle sheds for more music from new bands and old hands. But, if you can't make the Folk-Fest, why not pick up one of the three official Leigh Folk Festival Cd's for a taste test of the event. 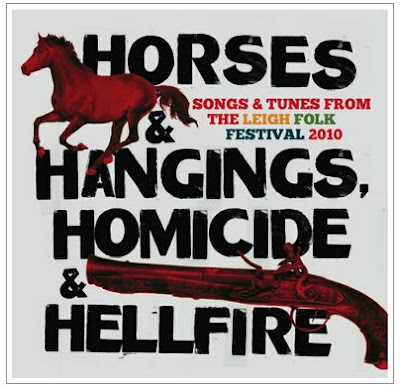 If you are coming to town, don't forget - Canvey is literally skimming distance from Leigh, if you fancy some Oil City sight seeing

Today's titbits are taken from the Island Folk Box - a triple CD set that seems to suit the mood of any season. If you only listen to ANY two tracks from this ol' blog - starring the athletic banjo of Bryn Haworth and Bronco's slow-shifting arpeggios. 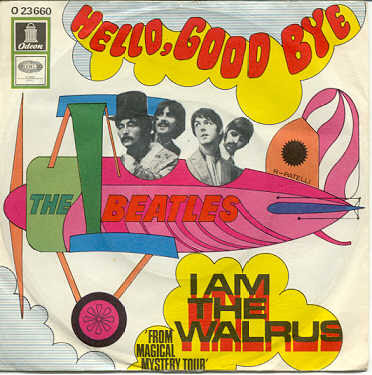 Borrowing an opening line from a cult classic..

What's it going to be then, eh?

Good Day Sunshine and on to the quarter-finals or a Long and Winding Road home? 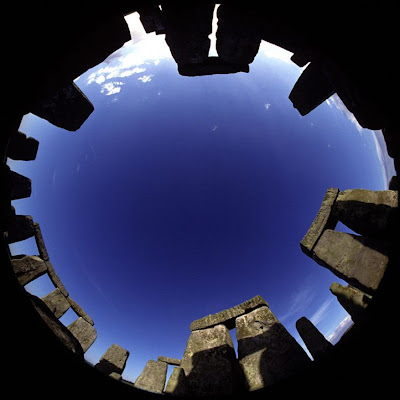 It’s been a while since the last Lazy Sunday charabanc, but with the Druidic doings afoot tomorrow, celebrating the onset of extended lazy days and short heated evenings, it seems timely to fire up a seasonal (and in places mystical) selection of summer numbers, hand-picked and slow-blended, ready to soundtrack any sunny, outdoor sipping and soothing.

You'll find the tracklist in the comm’s to avoid being blog-walloped.

Me at the ‘Henge in my favourite top of the time 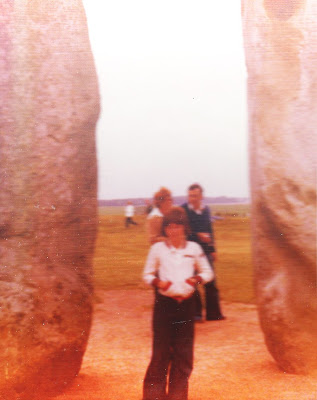 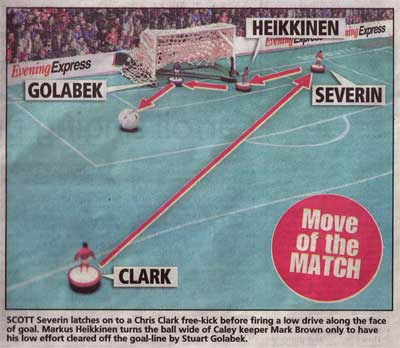 I hadn’t planned to start a run of football posts - just chip in with a couple to capture the rush and buzz of the World Cup kick off. But now I'm semi-obsessed with it, weighing up the heavy-hitters and competive form, working out possible options and placings. Even the vuvuzelas ongoing drone has begun to sound hypnotically exotic. If you’re up on events you may want to skip the next bit. If you’re not up on events.

England have to win tonight (Algeria) and next Wednesday (Slovenia)

Finishing second place in their group (C) simply won’t do. Second place means meeting Germany in the next round. That’s us pitched against a great white shark of a squad - prowling and playing a sharp, sleek and lethal form of football.

Forget the soft soap, stoicism and stiff upper lips. If England can gun it and go, hitting their fixtures with the sweaty energy of the MC5, we could breeze it to the next rounds.

Beastie Boys - How We Gonna Kick It? With A Mandolin, Fiddle, and Guitar!

That's it. I'll shush about football (for now)

Match Fit (featuring one the few decent songs about football) 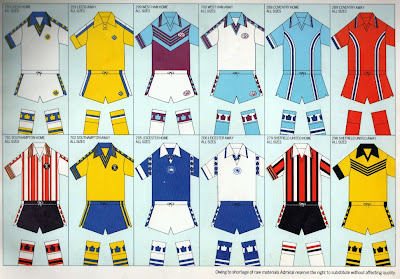 Click pic for larger picture....
Before my single season (90/91) of enthusing and actively supporting Southend United, there had been an earlier run (1976 - 78) of total football craziness. Although mostly, it was peripheral bits - sticker books, Shoot magazine, facts and fashion - that had me hooked rather than the game itself.

Facts: The bottom-feeding fortunes and shifting positions of underdog clubs, Workington, Grimsby and similar were followed like a weekly soap opera. If asked (not often) I could rattle off the home grounds, away colours and club nicknames of any English league team.

Fashion:76 - 78 were the seasons when Admiral become the Kings of Club Kits. Sweeping aside the regulation ringer shirts, or pre-war style plain tops for futuristic, space-age designs: flared tracksuits, sleeve stripes, inverted chest stripes, multi-coloured collars all snappily badged and branded with the Admiral logo. For me the absolute cracker in the catalogue was the sky blue Coventry tram line design (or egg timer as some call it). Genius! Available in four colour variations - blue (home) red, yellow (away)and the legendary brown outfit (2nd away). 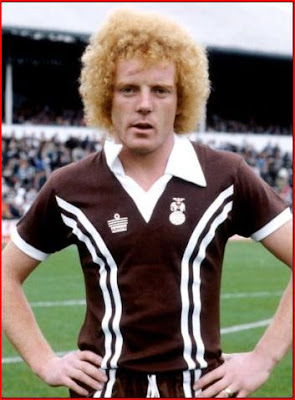 It's no understatement to say I was entirely obsessed by the Coventry kit (sky blue variant) and other tramline variations - Wales, Dundee, Saudi Arabia. As 'soccer' began to break in the States Admiral's magic could be spotted dressing dynamically named US clubs: San Francisco Fog, Detroit Express, Philadelphia Fury L.A. Aztecs (I found an Aztecs shirt in charity shop in '91, but binned it eventually. Worth a fortune now) 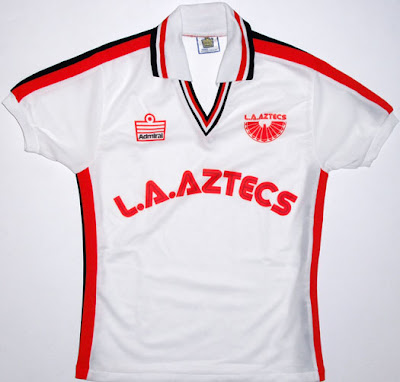 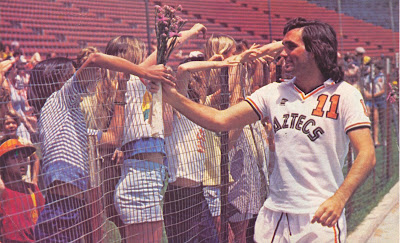 Funky Friday - It's All Kicking Off 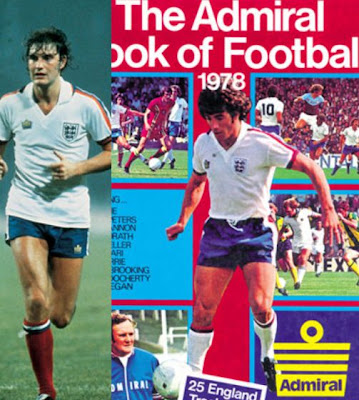 I've always been slightly agnostic about football. I have tried to see the light - even signing up for a year's membership with Southend United in the early 90s. Although lower-league hoofing and thumping, 8-0 maulings (Crystal Palace) and mid-week aways to Swansea and suchlike would test the faith of a saint.

The World Cup though, is literally a different game. Italia '90 was the tournament that reeled me in with it’s internationally tall tales: Cameroonian stories of snake oil leg-rubs and voodoo doings. Colombia with the fantastically be-afroed Carlos Valderrama and that scorpion kicking-keeper. Eastern European units snapping and nipping about like terriers. Alien dangers unknown in our domestic setting: altitude, heat and humidity - the need to neck down salt tablets?

Don’t worry if you're already suffering from football fatigue, I won't be grinding on about it too much. But as England go up against the USA (formerly Team America if I remember - who I'm sure briefly appeared on TV in the 70s) for perhaps their most public set-to since the Boston Tea Party, I couldn't let the occasion go unblogged could I? For balance I'll fire up something tasty from both nations.

A Manchester band with an instrumental for our national drink and Little Milton's corner shop conundrum (what are grits BTW?) 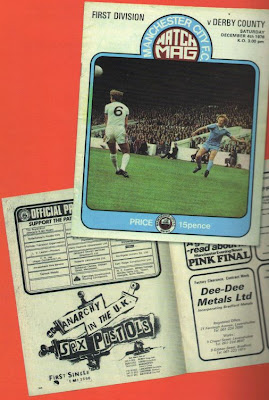 Hurrah! Things seem to be moving to a better, brighter and more manageable position, so I'm in the mood for getting back on the good foot(y) and giving two formations of Young Scene (The Big Match theme) a run-out. Keith Mansfield's original versh and a sprightly, sporty refit from The Graham Walker Sound

Anarchy comes to Maine Road:the programme pictured atop this page features one of the earliest outings for Jamie Reid's Anarchy graphics - you can catch a clip of the match below 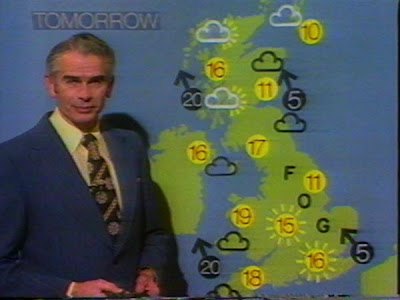 Apologies for the slower tone of today's post - but we had some unexpected news a couple of weeks back which left us stunned and shaken (I won't expand at the moment if you don't mind). Since then, the swirling storm of push 'n' pull possibilities and slow-release of reality has begun to still to a steadier level of more positive prospects.

It's been a bumpy couple of weeks that have left us numb and unplugged from all the usual doings, although something that's kept the mood buoyant has been the soothing tunes of Trojan Records. Tunes like...

I'm sure this just a rhythmic dip and the normal nonsense will be resumed soon.
Posted by Mondo at 7:07 AM 8 comments

You may remember back in March, a mention of Plectrum Live Editions, an evening where I caught Cathi Unsworth reading from Bad Penny Blues. The hard copy companion to Plectrum’s Live events and website is the print edition magazine. The May/June issue of Plectrum has just been published and alongside the arts features, short stories and interviews with Biba big-boss Barbara Hulanicki and Biba model Delisia Howard. You’ll find me guesting as reviews editor lending a critical ear to minty fresh albums, singles, comics and podcasts. Two tunes under review are... 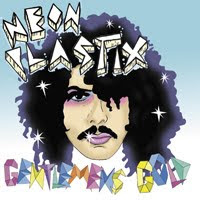 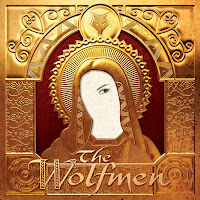 Have a listen, see what you think - then click here to see what I think
Posted by Mondo at 9:20 AM 7 comments