World of Sport for all.. 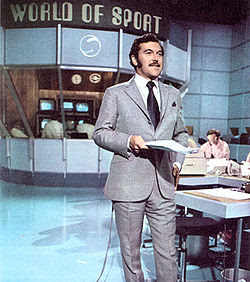 Sport of all/any sort is the theme we'll be kicking around on Radio Podrophenia tonight. Joining us in the commentary box straight from the sportsdesk is our resident expert @marmite boy

We're playing 4 a-side (tunes that is) from Piley, Marmite and myself - pitching in a couple pop quizzes with chatabouts that may include..sport in unlikely places, have you won a medal in any event and how does Hadleigh in Essex, one of the UK's flattest counties - become the arena for the Olympic mountain biking event

You can lend an ear to last weeks fixture here (or on iTunes), fitted around the theme of Food

In a last minute switcheroo - we've had to play a substitute with Jack Gestures is now filling in for Marmite...

Punk and Beyond: New Artworks from New Wave Artists 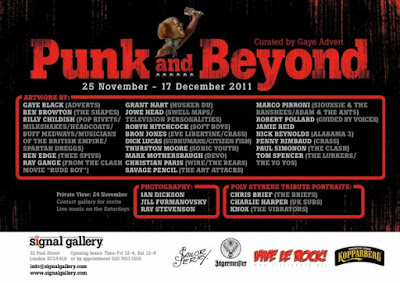 There is (well, there was) a very British tradition of musicians and music biz types - finding creative inspiration and influence while working though an academic stretch at Art School - Lennon, Townshend, Keef, Jimmy Page, Bowie, Bryan Ferry, Eno and of course later - the class of 76: McLaren, Matlock, Poly Styrene, Adam Ant.

Punk, as a movement, was almost a sonic blast of Pop Art shock with it's Warhol pallet of out-of-register graphics, dayglo spray and droptone trim. Continuing this - Gaye Advert launches her latest expo at the Signal Gallery, Shoreditch - Punk and Beyond. A collection of new, or of-the-time art from first generation punks and new wavers. Heavy-hitting contributors to the current installation include...Marco Pirroni, Thurston Moore, Paul Simonon, Jamie Reid and Jill Furmanovsky.

Punk and Beyond runs from 25th of November to December 17th with live music performances on Saturdays from several of the artists on show - ..

A few of the sights to see include pieces from... 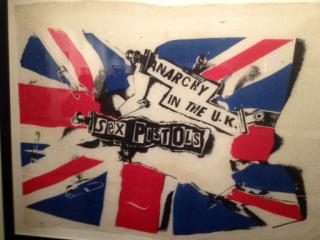 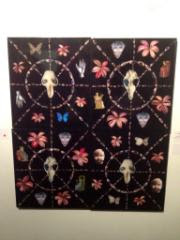 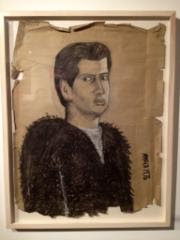 Marco Pirroni self portrait from 76 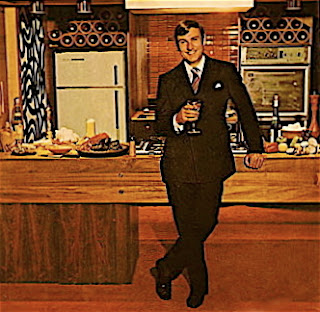 A belly-busting buffet of foody tunes are on the menu for tonight's Radio Podrophenia.

Breakfast, tomatoes (sliced), grapes - baking even are all on the shopping list of popular song. Although given some of the subjects that have been bouncing around the board over the last couple of weeks: Biffins Bridge, Pouch of Douglas and I won't even mention the G word (NSFW in *any* way) - you may be best to have your tea before listening, not after...

Chat and banterwise Piley and I would like to know: extreme eating experiences, forgotten fast food chains and your grimmest eating out moments please

Prick up your ears and prepare for a double helping of 'hellos' from all at E. Pellici's (below) in English and Italian. We're live from 9 on Chance Radio tonight... 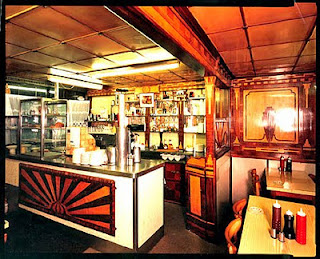 And if you fancy some extra seasoning,  last week's edition: Seasons is available for take away here.. 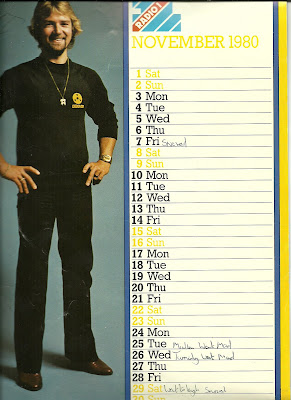 Without question - the most muted month in the history of Dear Diary doings. As the action switches (temporarily) to the trusty ol' Silvine notebook - where the news is...

Coming 105th in Cross Country Run (and some poor puffing shunters 'got lost' apparently). Well it was through the woods. And who knows - some of those runaway nags may still have been on the gadabout.
On the 8th: a trip to Leigh, buying Adam's King's album and,  where we pop in to see Liz Karslake whose older sister (Jo) later became Mrs Ron Wood

Everybody's favourite Science Teacher Mr Hamilton - spent a lump of the lesson unravelling and popping holes in the baggy formulas and theories that made up Arthur C. Clarke's Mysterious World. A trip to nan's for Pie and Mash (also Sounds and The Unexplained too). And how about this - pals Andy Hampson and Barney pop up as presenters on TV's musical yoof show - Something Else. Dexy's Midnight Runners were the turn on this episode and you can catch a Dexy's extract from this exact edition below. Calendar-wise. It's the return of our school year's lumpy chums Mullen and Turnidge who 'went mad'. Although there's no anecdotal evidence to support this - I suspect 'narking' them was probably the root truth of the meltdown. 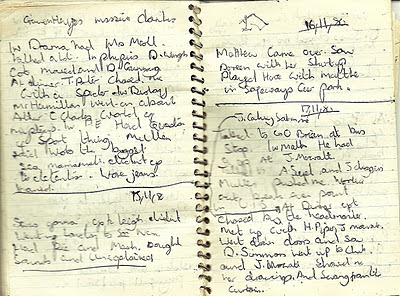 Records bagged were Kings of the Wild Frontier and The Black Album. Two albums that, for me, were Narnian wardrobe moments of other worldliness and portals to punk/new wave's potential possibilities and technicolour dreamscapes, that left formulaic punk fodder seeming generic, dated and faded. A bi-dynamic pairing which are equally, early outings in new wave experimentation  - and templates that stand as indicators and shapers of the 80s fads and fashions that followed: new romanticism, narcissism, new-wave-goes-pop, guitar twang, psychedelic revival, 60s revisionism, goth. 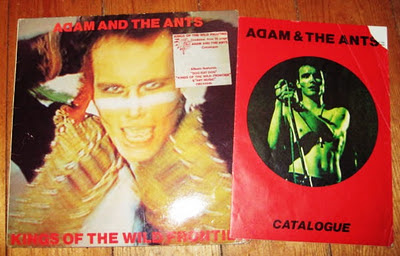 Black Album not pictured - it's buried in the loft somewhere

Exactly 31 years on from buying these albums - I've seen most variations on both bands this year Adam (June), ex Ants -The Wolfmen (July) and last Saturday, The Damned recreating the Black album at The roundhouse (review here). The Damned, who've always delivered and never disappointed live are now, more polished and accomplished than ever. The Wolfmen take Adam's antics into new glam/garage areas. And Adam has compressed his characters into a composite rather than move on - but he hasn't lost it ( in a performance sense) either.

Two tasters from both then - The Damned's midnight cinematic shimmer, with a coda that always reminded me of  the Hooray for Harold Lloyd incidental music...

Adam And The Ants - Killer In The Home

Seasons to be Cheerful, Part 23 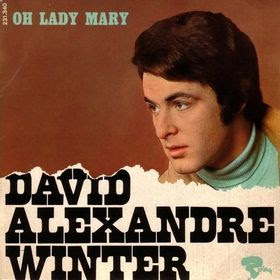 Including: two types of Fall {one song, one band} Summertime, Rain and David Alexandre Winter's Qu'est-Ce Que J'Ai Danse! Although for all the scouting about - I couldn't for the life of me find a springy-thing. Any suggestions - let me know. Also piping hot off the press is a live Damned track recorded at The Roundhouse during their 35th Anniversary gig last Saturday

We'll be parked up from 9pm hereabouts at Chance Radio. Should you fancy catching up on the last couple of back issues - grab both below 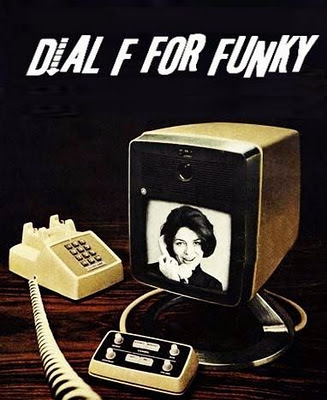 Picking up from Tuesday's funky run-out, today, I'm pitching in a 22 track, 70 minute mix whisking together all shades of soul, funk and groovy doings. Heavy-handed Hammond, New Orleans grinders, mod stompers, Jamaican moogie-woogie and Latin flavoured wig-outs. Mostly fitted around the letter 'F' wrapping up with two fast and furious and finishers. And a first in this neck of the blogs - funky country. Literally!
Dial in below to fill your fruity boots....
Dial F for Funky

Or to back track and catch up Tuesday's Radio Podrophenia (the letter F) dig in here..

Same and Dave. Well overdue for a toot on the blog. And check out the swish~hipped horn section!

Where's the F in Funk 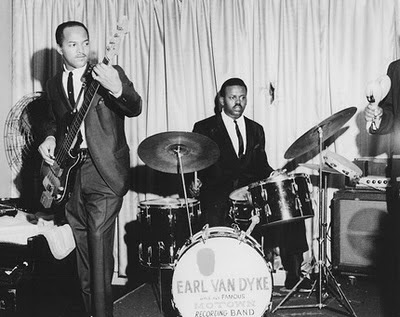 Chapter Six (well my half) of the Podrophonic Alphabet sets controls for the heart of funk playlisting naught but nifty footed-nuggets and unlikely places to find The Funk: onions, fever, trips. Also an unreleased Motown rarity and a Georgie Fame outtake.

Lend an ear here from 9 for a fistful of funky gubbins and an all out super-power con-funk-tation. Also nipping in from 9 is Fi Jacobs for a Railway Round Up - did anybody manage to eat/beat the Crass Burger Challenge...? Find out tonight on Radio Podrophenia. 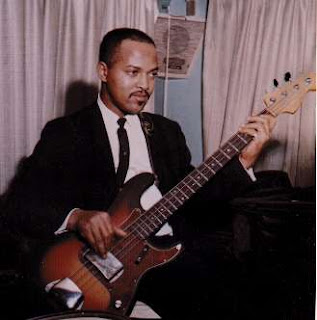 Above: James Jamerson and his 'Funk Machine'

Below: my Jamerson clone bass.. 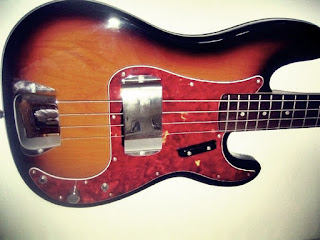 Should you fancy shaking an anniversary leg of a Friday night, our chums over at Blow Up celebrate 18 years of  Pop Art club nights, hip-swishing sounds and big, beaty, retro groovy doings. Get on your sharpest finery and head westwards to W12 as Blow Up DJs - Paul Tunkin, Ian Jackson will be spinning 60's Soul, Beat, Garage, Funk, Ska, Soundtracks, Electronica, Library Music colliding with British Pop, Glam, Indie-Pop and New-Wave. Click on the pic for all the info you need to know..

Here at Mondo HQ we offer an 18th birthday soul salute and wish all of the Blow Uppers past and present a rip-roaring, rug-cutter of an evening..


Or, if you're a Word mag' reader and happen to be round and about Goodge Street way this evening - there's a get together of Word bloggers, browsers and contributors at King and Queen, 1 Foley Street, W1W 6DL - organised by Hannah

Those who've put an attending hand in the air include: Drakey Girl, Katy G, Jo dB and Retro Man. From the Southend Chapter, Marmite Boy and myself will be chipping along for a scoop or two. If you do happen to be round and about Goodge Street/Foley Street way tonight - why not pop in for a toddy and a chat from 6. All the info you need is here


The Massive Member Montage - I'm in there somewhere! 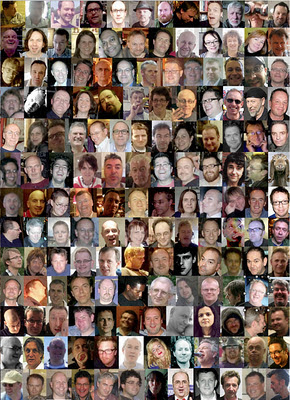 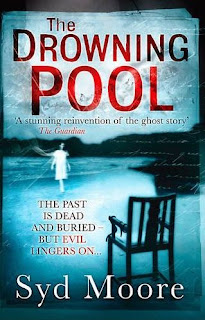 Hold fast for horror, spooks and spine-tingling tales from 9 tonight when we're joined by local author and  the High Priestess of Supernatural Fiction - Syd Moore, reading from her debut publication The Drowning Pool.. a ghost story that invokes a Leigh on Sea legend reworking it into a contemporay context. Also in is Paul from Pouch of Douglas who'll be giving us details of an upcoming zombie art expo..

And - if we can track him down, former keyboarder, guitarist and song writer for The Damned - Roman Jugg will be summoning up some live music! Musically expect requests for Eno and Byrne's Jezebel Spirit, Drac's Back..This House is Haunted and a special dedication for the Lee Perry track below..

All live on Radio Podrophenia between 9 and 10:30(ish)

If you haven't seen it -  tuck into the Possession episode of Thriller, one of the greatest pieces of TV fright-night fiction ever written...