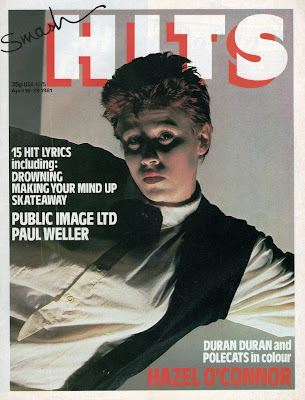 Picture from the always excellent Like Punk Never Happened
Continuing with the theme of 80s favourites - Suzy Norman revisits and reviews Hazel O'Connor's career. You can scroll through a roll call of other inspirational women over at Suzy's blog: Heroine Addict.


As a kid, Toyah and Hazel O'Connor were my role models.
In my defence, there are reasons why I sometimes conflated the two in my young brain: Both Toyah and O'Connor were ex-art students and singers with a commercially diluted punk bent and both were influenced by Bowie.
With hindsight we know Toyah's presence on our screens has been longer lasting - having enjoyed better luck than O'Connor; Toyah has enjoyed a successful stage career (the highlight being to star alongside Laurence Olivier).
But O'Connor has the edge as a recording artist.
A big break in the form of a lead part in Breaking Glass (1981) propelled O'Connor to almost instant stardom – but only for a while. In fact, O'Connor was set against Toyah for a role in the film. Toyah wasn't selected, and after some internal rearranging, O'Connor was chosen to be the lead. Toyah -  already established as a result of appearing in Jubilee and Quadrophenia, wasn't the appropriate choice for a rock star on the rise. 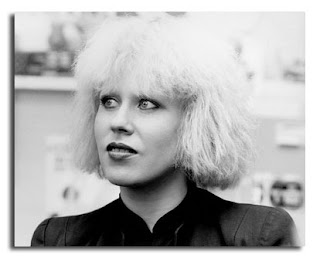 It was O'Connor's time to shine.
The film charts a young punk star, Kate's rise to fame and ponders the theme of fortune being a poisoned chalice. Kate - a young woman coming up against a formidable and manipulative record industry – was a plot that was to strangely mirror O'Connor's own career.
As a result of her uncommonly brutal and protracted disputes with her record company Albion, O'Connor didn't fully have the chance to develop artistically. Her legal grievances escalated over the years, and as they did so - in an age-conscious world, she grew older and less marketable.
The tedium of legal dealings, invariably and understandably, ate into her creative fervour. And this is a shame because we'll never know how good she could have become.
In short, O'Connor signed in haste with Albion and repented at leisure.
She was persecuted. Signing her record contract when stressed and upset, she made a wrong move that was to have diminishing consequences. Having first taken legal advice (and she was sternly told the contract wasn't worth the paper it was written on) - nonetheless poverty and a subsequent low moment,  meant she signed along the dotted line.
In the ensuing years, what happened to O'Connor would have been enough to send anyone bitter. Whatever she earned was greedily taken back from her. Her label justified their behaviour by saying money should be clawed back to cover recording and touring expenses. This meant O'Connor worked extremely hard – almost to breaking point, and was left with nothing:
'I haven't got any money still. I'm not going to have any money for years, if ever. There were times when I thought if I wasn't naturally strong I might have done myself in...At one point I had writs arriving every week. Such bastards! How dare they treat me like this.'
O'Connor 1985
Will You is one of the best tracks of 1981 - which is praise indeed, because it was a particularly strong year for music. In a short space of time, and musically at least, she eclipsed Toyah. She was capable of innovation - producing lasting songs that were richer and texturally denser than Toyah's forgettable ditties.
But on the back of most of her singles - industry crimes against her aside - it remains questionable whether she had the raw talent to go the distance. She did though, have have moments of undoubted accomplishment.
On balance, Will You is partly a stand-out song from her short career because it's unlike most of her others. It is very good indeed.
Will You has more than a smudge of Patti Smith to the vocals. As with If Only, this Patti Smith emulation is a credulous style choice, and perhaps she could have further developed this tonal quality. That would have been a worthwhile direction for her to pursue. But just how good she could have been – or not - we shall not know.
Here's Will You and If Only – her two best tracks.

Makes me want to watch Breaking Glass again, can't believe it's nearly 30 years since I watched it.
I still think the Sheep Farming in Barnet EP and Danced by Toyah sound pretty good actually.

Seeing as it's the end of the world this weekend you'd better get in quick and listen to Polyvinyl Craftsmen Transmission 12 http://polyvinylcraftsmen.blogspot.com/2011/05/transmission-12.html

She keeps cropping up. I talk to someone who'd recently been to see her play a gig - I think it was Deal in Kent (don't quote me), they said she was brilliant and took their teenage daughter who was totally blown away apparently. See show the kids of today real talent and they do get it :-)

Also someone else mentioned to me about her the other day - I remember having a conversation on the telephone... now who was that?

You'll be catching us up soon Coops! - Podrophenia 16 due soon.

I didn't know she was still gigging F/Ron, but after checking the trailer - I've got to have a squint at Breaking Glass. And Rat Scabies too - bonus for The Damned fans...and then there's Hazel's Hugh Cornwell connections.

We went to see her doing Breaking Glass Live! just before Xmas in Leicester Square. She was really, really good. Still got it, Haze.

Would love to see her live now. She had loads of potential, just a shame she couldn't have had more industry luck when she was younger.

I had mixed feelings about her. I thought Will You was a great song, but then I saw her make a guest appearance on some kids TV show - I think it was Murphy's Mob - and she did a rubbish electronica version of "School's Out". It was all slow and teutonic, a bit like the Flying Lizards but without the sense of humour. Put me right off her.

As a newbie, where would you recommend dipping in outside of a greatest hits type comp Suzie?

To be honest, Dave, I wouldn't look much beyond the Breaking Glass soundtrack.

I saw her in the early 80s playing to a packed house and it was a good show but that's not the real reason for this comment. My wife saw her several years later playing to about 40 people. She says she still put on a great performance and chatted to individual members of the audience between songs.

Nice bio, but I must opine that "Breaking Glass" was a condensed soap opera about a corporate world that no punk of '76 or '77 ever knew (and by the way I was there at the time). Come the 80's when punk was past, Hazel's biggest problem as an artist was that, despite her looks and her presence in front of the camera and on stage, her songs weren't very good and her musical style was dated.