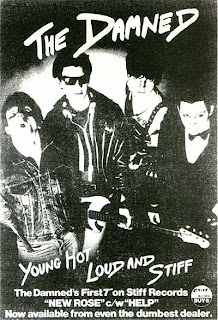 Written by Brian James, a first class chap who was good enough to give up some of his Sunday to speak to me about the history of 'New Rose'.

"I'd had part of the song for a while, and even been jamming it with my earlier band Bastard, who were into The MC5, The Stooges and The Pretty Things, but it was when I played the riff with Rat(Scabies) - who drummed like no one else I'd ever played with, that the energy of Rat's drumming and his style fitted the riff so well that the song came together and was created out of that moment

Jake (Riveria) signed us after seeing the Damned at Mont De Marsan, on the strength of 'New Rose' and saw it as a single straight away even though Captain (Sensible) wanted 'I Fall' as the first single. There's no demo's for it we didn't really bother with things like it we just went straight in the studio and recorded it."

Is there a real life Rose? "No, it's not about a girl, it's really about what was happening at that time the speed and the energy of the movement - The Damned were always about the energy."

We also covered all sorts of other areas during our chat - guitars, previous bands, current gigs, and future projects all of which I'll be logging in the blog soon.

Certainly I see New Rose as one of the most important singles ever released, and being equal to anything Elvis , The Beatles or the Sex Pistols ever unleashed.

I love the Pistols and their two fisted filth and fury (even though they booted the The Damned off of the Anarchy tour). But New Rose snapshots the mood, the moment and the DIY ethic of early London/Brit punk more authentically than anything else from this explosive era.

Crash! Go the drums. Thrash! Goes the guitar. Rev up the riffing and they’re off like Bash Street brats out of hell and God help anyone who gets in the way. The Damned ram raided the UK charts by releasing the first punk single and album and even appeared at the first Punk Festival in Mont de Marsan (attended by a pre Joy Division Ian Curtis, and held a month before the 100 Club Punk Festival). But it was the impact of New Rose, and The Damned being the first UK Punk band to tour America that sent a Punk rocket to the epicenter of the States causing a sonic bang so explosive that the fallout is still being felt today.

The Sonics, The MC5, Iggy and The Ramones may have already been grinding out garage anthems and had some success in their home towns – but none of them raised more than a blip on the ‘punk-o-meter’ across the States. The Damned blew the bastard thing to smoke and shrapnel.

Consider this - what speed do the first wave of US Punk bands - The Dead Kennedys, The Dickies, Bad Brains or Black Flag - play at, Damned or Pistols tempo? From here you go to Hardcore to Thrash Metal to Metallica to Guns N Roses(who covered New Rose) and Nirvana (who ripped off Life Goes On for 'Come As You Are'). Not all this may be your type of tune, and not all of it’s my type of tune, but it’s undeniable that it all leads back to the Damned and New Rose.

"I thought the Damned caught the true spirit of Punk, as understood by Punks, better than their rivals. They devoted less time to striking attitudes & never forgot, as many historians have that Punk could be quite funny as well as exciting." John Peel - 29/05/02

Help - The B Side of New Rose


A special thank you goes to Brian James for his insights into New Rose, Punk and all things Damned, and also for allowing the use of Mp3's in this posting
Posted by Mondo at 12:28 AM

Nice work PM - and what a scoop getting Mr James to talk to you about such an important era and record. Looking forward to reading the rest of the interview.

PS - WAS she really going out with him?

I know I can't believe my luck being a huge Damned fan - He's a absolutely tip top bloke. Forgot to ask him when are we going to see the long lost Damned biography. Someone's got to do one soon

I reckon you should do it... You seem to be getting in the swing of it nicely ol' son.

New Rose is a winner, it sums up the chaos and energy of the time.

My old band Love Gun Deluxe used to do a cover of Neat Neat Neat by the way, followed by I Ain't Sophisticated by the Ruts and then Ace of Spades. It was a manic, chaotic, blast lasting about 10 mins and at the end we would just collapse in a kind of mixture of laughter and exhaustion. Truly great fun to play...

Excellent stuff Mondo me old china. The Damned never seemed to be in it for anything else than the music, which, although not all their fault, wasn't true about The Pistols. They also seemed truer to the punk ethos and far less 'manufactured'.

For that reason alone they should be held up as the greatest British punk band.

The Damned seem to be the permanent underdogs of Punk which is tragic considering what they achieved and how they followed it up - Machine Gun Etiquette, took punk in new directions when all others were going Pop or Oi. The Black Album was years ahead of Goth and the 80's Psychedelic revival. And Strawberries is Punk,Pop and Prog in one fruity bundle.

Check his blog here it's always winner - he's doing his bit for the badgers population at the mo'
http://www.myspace.com/thecaptainsensible

bastard is such a top name for a band too.
i've always loved the glamness of new rose - it's powered us up the m6 many a time
x

Bastard is a great name (Motley Crue's first choice of 'Christmas' being one of the worst) and a truly tip top track - have you tried the Peel Version at the bottom?

In a month or two the band I was in that had been called Satyre changed it's name to Gash and off it went. Err minus me I got sacked sadly.

Whilst the Pistols got all the coverage to me the Clash and The Damned really summed up what I thought 1976/77 was all about.

Check out his Under The Floor solo on Strawberries

And have a nosey at
www.onewaylove.com/ For more Damned goodies - it'll take you right back to 76/77

A great post worthy of a great song (and band). Nice work indeed.