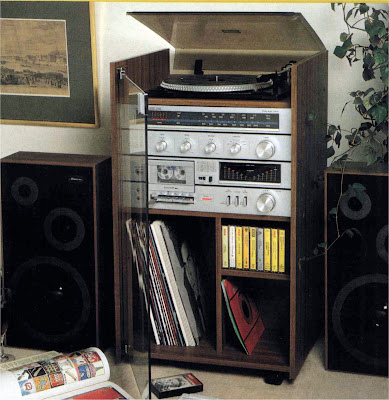 The sort of Hi Tech Hi-Fi and graphic a go go system used to pump up the volume for most of my 80s 12" s.

Following on from last weeks Purple Nasties post, I've clipped and compiled twelve snippets from retro electro eighties tracks - 12" versions have been used where available - so, just how many can you pick out?

Post your answers in the comments - and I'll do marks out of twelve in the replies.
One clue - none of these tracks are post 1984

And is there anything more all out early eighties than this
Posted by Mondo at 3:24 PM

Gosh, top idea for a game, I recognise blue monday in there and the one after sounds a bit Prince-like. Is there Axel F in there too? This too hard! And I bet I'm way-off.
Dad used to have a stereo just like that one.

wat no echo n the bunnymen????

Well I'm liking that rather fabulous hifi! And I've got various scribbles on a piece of paper here but I couldn't work out where some tracks ended and others started! Anyway - my scribbles are:

There is an old school electro one in there towards the end - I may have to have another listen.

In the tradition of Eurovision - you've both scored 'Nul point'

Alhough I would have had to clip a couple of points off your score RE for the phrase 'Dad used to have a stereo just like that'!!!
*Cringes shoulders at the thought of being tarred with the 'old and gnarly' brush*

Bleech - there's no Echo in this comp.

RM - you've got 1 out of 12, that's a good point about the start/end so I've tweaked with extra gaps

None, absolutely none. I have no hope as this is nowhere near my specialist topic - 'shoegazing classics of the early 90s'.

When you've flushed out the early 80s 12" experts out there though, I think you should post 'em in full. I'd love to have a listen.

Hmmm. Not sure about this; lots of stuff that sounds familiar.

But I think I've got these:

The blue monday sounding one is tricky, there's another New Order track that uses the same bass line, and there's a cure tune I think that does..but I don't know. The rest, I'll probably kick myself!

Ah yes. That goodbye is Look of Love. thanks Mick for pointing out the error of my ways. I was singing the right song in my head...just typed incorrectly!

I've just listened again and No 2 is Night Train by Visage.

The rest are fairly tough, but I reckon you'll kick yourselves about number 10

Never mind the music, how on earth did you manage to get a photograph of the inside of my father in law's living room?

Any Yello? (She clutches at straws)

AV - wait until you see some pics from the 9 catalogues on 1 DVD, I picked up on the 'bay recently (for just 5 earth pounds)

RE - There's no Yello either, the others may be tougher as they're club hits than chart hits from that time.

I Am Not The Beatles said...

Hello Mr Mondo, thank you for your belief that I would know what the living hell was going on here but... I draw a complete blank.

I couldn't even afford a 7" at the time so your bloody posh 12"s were well out of my league - and my suspicion is it's all a little bit too early in the 80's for me.

Still, there is an upside - it probably means I'm younger than you.

Bleedin tough! I recognise most of em, but cant get many. THe only snaeky one I got was the New Order one.... which ISNT new order i believe!!

That 'Blue Monday' snippet didn't sound right to me but I figured it must be a mix I hadn't heard. I'm convinced Piley's right and it's not New Order. One other sounded a bit like Fad Gadget but I'm sure if it was I would know it.

IANTB
You can go off people you know ;) now where's that delete comments button then.

P and Mick answers will be here tomorrow and where possible links to the tracks..

That my bit useless info today