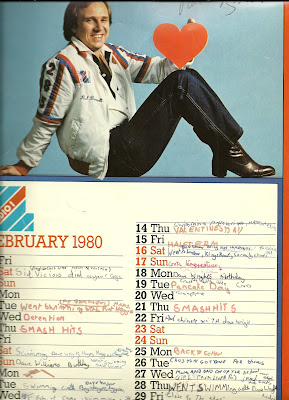 What still no PVC trousers! (ordered 4th of Jan, they were)

Get in the swim - seems to be the motif of month, with a micro-buzz for splashing about in our local venue - Runnymede. Originally built for swimming competitions, with an Olympic size pool and a deep end for competition diving - but no viewing gallery! Smart moves donuts!!

On a similar riff, one of the design faults/or bonuses (depending on your view - literally) of our school's PE changing rooms were the boys/girls interconnecting radiators, which, mirrored each other on either side of a breeze block wall - joined by a copper pipe running through a small 'I-spy' hole in the brickwork.

Those that were sly-eyed, prepared to kneel, squint and take a faceful of raging radiator heat -  could tune into the the other side's fruity doings like a fox staking out a hen house. Unless of course, some quick thinking gal had hung a towel over the 'hers' side of the rad's. Although no such barrier was in play when Chaselton settled himself in for a righteous eyeful on the 26th.

Chaselton (nickname:Mullen - don't know why) was the sort of boy you wouldn't get away with tagging as Educationally Sub-Normal now, but could in 1980. Mullen moved with the lumpy rhythm of stop-motion animation and was usually paired up with Turnidge - who, looked like Graham Garden and gave a gritted peeled-back, grin, but never spoke. Together these two odd-boys bobbed around the school grounds in their own outsider orbit.

Until Mullen, like the rest of us, heard his hormones calling and took a turn peeping into the wee gap of mystery and magnificence - only to have his beady-eyed freeview hand-braked by the untimely tapping of the PE teacher on his cringed shoulder. For a few over-heated moments, Mullen had finally come into alignment with the rest of us and was one of the gang. The gang being a rolling collective of sweaty faced fidgeters, knee-shifting like snipers for maximum accuracy.

Of course, the moment his lusty bubble burst, Mullen was once again the same old sack-like lad... who, later that year, we locked in the school greenhouse with pal Turnidge, bolting off to leave them silently shouting through the misty panes and tomato plants. Cruel, yes - but that was kids in the 80s. Who were probably just as cruel as kids of any other decade.

Appropriately given this month's radiator tales: singles bought were The Angelic Upstarts, Stiff Little Fingers, and The Vapours.. 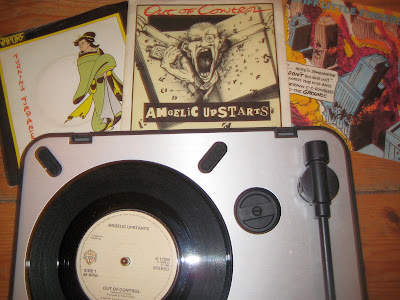 Angelic Upstarts - Out of Control

Stiff Little Fingers - At the Edge

Chartwise the rundown for this date in 1980 looked like this

Possibly the most bizarre album chart in human history - with Des O'Connor (17), snuggled betwixt John Foxx and The Clash. Dare to go below 40 and it's an all-out mind-fry. You have been warned pop pickers..
Posted by Mondo at 7:27 AM

At The Edge - brilliant one of the first 20 singles I ever bought.

going to see them again on St Patricks Night

Magnificent, as ever. Should we read anything into 'Girl from Liverpool joined our school' (27th) ?

Is it just me or do the charts seem a lot more diverse them than now. If only we had realised how bland they would become.

Drew - grab yourself a copy of Vive Le Rock ish 2 (out this Saturday). There's an interview with Jake Burns on page 55. I haven't played At The Edge since the 80s, but what a tune..(and White Christmas in the B side). Sounds a romper-stomper of a gig.

The charts are just bizarre back then: Fawlty Towers, The Nolans, Wishbone Ash buddying up with The Ramones, Pistols and Iggy Pop.

Bless you Davy. Scouse (as we predictably we nicknamed her) - nothing to tell apart from a snog and a swap: my scarf (bought the previous October) for her conjunctivitis. Oh, and She pronounced The Damned as The Damm-und!

Im Johnnywas in a fair number of places online, back when I was younger I never wanted my real name online. First username I picked was because SLF were on the stereo.

I wonder if the girls were just as curious about you boys, and took sneaky peeps from their side?
hehehe... I would've!

Apart from what you see in the pic - I've never dipped into the SLF catalogue. Perhaps I should..

*Gulps* Never though of that Lil! Actually I think it did happen, I'm sure I remember shouts and squeals coming from the dark side

Is that detention I see on the Wednesday Mondo! You weren't caught looking down that copper pipe too were you?!

I did get busted for boggling once! while shouting out who I'd spotted in an unwrapped state, there was strange and sudden silence - a bit 'sus'. So turned round to find the PE teacher standing statue-like with his arms folded

Can't think what the detention was for though - I seemed to rack up a few here and there. A pattern the eldest Mondo seems to be falling into

And Slade must have gone to the same barbers too

Thanks to that Top 75 singles rundown, I've just downloaded Maybe Tomorrow by the Chords.

Turning Japanese, followed by A Chinese with Dave Wright?!

But Feb 1980 really was swimming crazy wasn't it?

I've included links to charts with previous DD posts, but this has to be the bonkersest of the lot..although I haven't checked March yet Matt

Forget to mention on Saturday the 16th: a great visit to London with Dave Wright. It was my first trip to King's Road and we spent about an hour looking around the wrong end of SW3 for Seditionaries. We got as far as the Great Gear Market - but not World's End..and came home with a God Save The Queen T shirt from the Chelsea Drugstore (now a McDonalds)..

Also popped into Portobello Rd and was blown away seeing the Virgin offices with Pistols posters around the office walls tucked down a small mews side street.

And what became of Mullen and Turnidge? I have to know!

'Going swimming' as I remember it really meant "hanging around the edge of the pool in my sister's 'borrowed' bikini, wondering if the pipe-cleaner shaped youth with acne on his shoulders will ever stop 'bombing' his mates and come and chat me up."

Do you know I've never even though to look for them, but a quick scan of Facebook shows Turnidge. If it's the same one (and I'm guessing it is beacuse of some local Benfleet/Canvey references} seems to be something of a Southend survivalist whose likes include: Gone Fishing Canvey, Carved with axe and knife, 'usa-fighting.info' and Dutch Oven (which has an entirely different meaning in my book of phrase and fable..}

Like Grange Hill come to life. I loved the charts then. Probably one of the favourite musical eras of my life.

That's what I thought - under the bedclothes usually? But apparently not , there's a survivalist spin to it..

I always said Grange Hill was like our school without the swearing FC, flick back through previous DDs for more chart links - I've included with them most posts