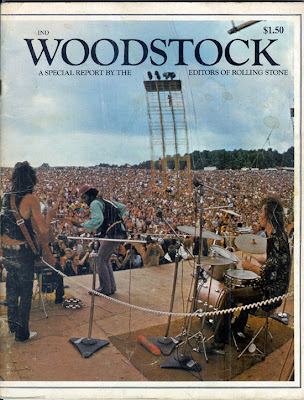 I know I'm a few days out of date with this, but had my own anniversary to do last week.
Two years ago, I had my brain fried, my mind altered and my doors of perception blown to smoke and splinters in one sitting How? By sitting through my first ever viewing of 'Woodstock'.

Partly - as I thought I'd brought home the DVD of that music fest' where Hendrix sets his Fender aflame. It took a few minutes viewing until realised that music fest was actually Monterey! Whoops.

But mainly - still ingrained with 'Never Trust a Hippy' hard-coded punk standards from my teenage days, viewed Woodstock with a sly eye and had it pegged as fuggy aired, fuzzy haired, hair-baring love-in. And a long weekend of Freak Brother freak-outs and whispy women twittering to polite applause from sky-eyed stoners and other-worldly arm wavers. Which in part it is.

However, what I hadn't expected, and left my head spinning like a shell-shocked owl were...

If you haven't seen Woodstock yet, you really are doing yourself a disservice. The 'director's cut' DVD regularly sells for as little £3 in some entertainment retailers, so why not treat yourself on the 40th anniversary of the event - here's a couple of clips and cuts to tempt you..

The two tunes are studio takes not live - don't be alarmed by the names they really are lolloping chunks of funk.

If you can't swing watching the whole clip, skip to the seven minute mark for the tempo change and the way it bursts back into life with the hookiest of hooky horn riffs.

The drummer looks like he's just finished a paper round, the keyboard player looks like Elvis. There's guitar hero gurning and curly cables too - perfect! Watch out for the naked stranger dancing with a sheep, and the ginger stoner at the close - you have been warned

And get the Woodtstock Diaries too for Mountain's performance

Great post. Wow. I've always been fascinated by Woodstock. I'd love to have been there, but I wasn't even born yet. Have a funky weekend.

Saw Richie Havens at Glaston one yesr in a tiny tent... he was still pretty damn good actually (brain a little fried maybes but good!)

Mrs P is a big fan of the film and soundtrack, but not sure i've ever sat threw the complete length of either!

Catch it on DVD Keith - and have yourself a hippy weekend..

It's a Killer P, if you only watch a couple o' bits check the Santana/Sly Stone sequence they run into each other, and The Who - killer..

Soul Sacrifice is still one of my favorite jams.

One of my favorite parts of the footage is the look of adulation on (Mama) Cass Elliot's face while she watches Janis Joplin sing. Her eyes are wide, her mouth open slightly, smiling.

Of course, I believe they were doing acid, too, so that might've had something to do with it. :-)

Then there's Ten Years After and Ver Who, also check out Mountain (link is in the clip above) - storming!

Bang on Pearl - what a Jam. That's what I love about the editing, the many reaction shots. Look at the way they build in the crowd getting into the Santana groove..

Hey there. I hope you've having a wonderful weekend. I've given you an award in my new post at my Dino Lounge blog. Cheers!

Wonderful post, such an influential event. Thank you for sharing Janis... one of the first artists to change my little girl life :)

Thanks for the award Keith - You're a star!

tip top post PM ... but no mention of mr hendrix's 'crowd free' set on the sunday afternoon? he's bangin away and the camera pan off to a TINY crowd compered to the love in the day before..mainly caused by a massive lack of food basically ppl had done the speed/acid/dope/booze and come out the other side with the major munchies leaving the farm for food....

satana set is ledgent tho.....

Bleech -It's a real morning after vibe when Jimi kicks in. Do you know I almost called this post 'Message To Love' and included this clip