One of my earliest entries on the PM blog was something about Les Paul. So a great shame then, to hear the sad news of his death last week, almost two years to the day since posting it.

How different would our record collections sound without Les Paul's contribution to guitar construction, technique and music methodology? A true pioneer and godfather of guitar, who, as Keef points out "taught himself to play guitar in order to demonstrate his electronic theories". Les literally created, shaped and sculpted the sound and tools for rock's tradesmen to take forward: solid body electric guitars, multi-track technology, overdubs, high speed soloing. Pretty much all the conventions of modern rock then.

There's an almost limitless pool of tribute tunes and riffs to choose from, either written or played on, by legends whose signature sound comes from a Gibson 'Les Paul' - try to imagine any of these without the weight and wallop of an 'LP' underpinning them..

It wasn't always this way. Post rock 'n' roll boom, Jet-Age guitarists such as James Burton, Steve Cropper, Hank Marvin, Jeff Beck, Bob Bogle wanted shiny new Fenders in sci-fi colours. Gibsons were too expensive, too cumbersome and too reminiscent of big bands and the Palais age to be lusted after by young fret-fiddlers.

Ironically it was a player now forever twinned with Fender that brought Gibson and Les Paul out of the post R 'n' R wilderness and into the R.O.C.K arena. Eric Clapton was the first rocker to realise the physical weight of Gibson LP and it's 'mahogany tone', would add warmth and sustain to his soloing. Plugging in and over-driving his Les Paul through a Marshall amp, Clapton created thunderous tones of previously unheard heaviness, and the classic rock rig (Gibson 'Les Paul' and a Marshall amp) used by an endless list of fret-melters since. It's not much of a stretch to suggest that any 'Les Paul' player whether guitar legend or have-a-go hero whose strummed or soloed on any LP model since the sixties are indebted to this monumental moment. 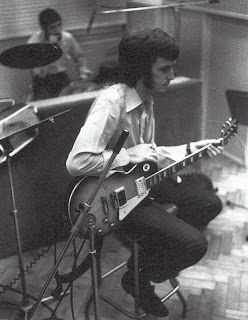 EC and LP in his 'Beano' period

I'm no Clapton fan but his raw-ramped, riff-ripping work on The Bluesbreakers 'Beano' album is the shape of things to come. Add in it's moment of pivotal importance in rock and guitar history and you have possibly one of the finest tributes you'll find to the legacy of Les Paul.

The Les Paul player that got me playing Steve Jones 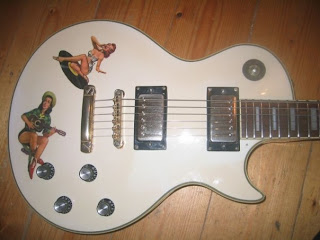 Great tribute to this legend. What a man. He made such a contribution to the world of music. He will be sorely missed. R.I.P.

Yes amazing really Keith that both Les Paul and Leo Fender got it so right first time with their earliest guitar designs. Any remodelling on those classic styles has taken away from, rather than added to the magic

anyone seen pics of him with a strat???? heheheh

without a doubt, he changed the world of popular music. Quite a feat. Oddly tho, I think thought he was already dead!! Sorry Les... A genius none the less.

Wonderful tribute post Mondo... a true feast for the ears. I love the Mary Ford video especially! Thank you for sharing.

Can you imagine Bleech a Fender and Les Paul team-up? *faints from the giddy over-load*

It's a name so established P, you'd think he'd have gone long ago the first bit I did about him, was along the lines of 'he's still alive'

Those harmonies on it Gabbi - magic aren't they? I really must get some more Les Paul albums

Brilliant piece, Mondo. I wanted to write a tribute to Les Paul but frankly I didn't have the knowledge. And like Piley I asummed he'd died years ago.

Thanks Mick are you a geetar-player of any sort? It was the early 90s when I discovered Fender and Les Paul weren't just brand names.

PS have you read Will Hodgkinson's Guitar Man. A great read if your a musician or not.

No I'm not any kind of guitar player. In fact, it's always been a source of great irritation that I can't get a decent sound out of a guitar. After all - I was 16/17 during the height of punk when, supposedly, anyone could have a go. Anyone but me, that is. Actually, I didn't particularly like punk and wanted to skip the rudiments and play like Bill Nelson or Steve Hackett from day one, which probably didn't help.

I'm no piano player either but I've been taught how to play some pieces and my fingers seem to understand the keyboard a bit better.

You should get one Mick. Go on,do it.

You can get a basic Telecaster , for around £120 (Tele is the model played Hugh Cornwall, Joe Strummer and tons of others , it's the sound of New Wave)

All the 'learn guitar' tutorials you could ever need are on Youtube, and then there's this book.

The trick is to find two or three simple(ish) songs you like, and try to teach yourself those. Don't give up after a couple of weeks though. Give yourself three months to learn three chords and you'll be amazed what you can do

He was an innovator and a decent human being. And you're right -- he got it right the first time.

That sums him up neatly Pearl - and full marks to Clapton for putting the spotlight back on LP. And creating vogue for vintage. IE old guitars are better than new

Great post PM. I was away when I heard. Now if you'll excuse me I'm going to give my LP Custom a hug.

Being a proud owner of a Les Paul myself I think most musicians would accept that we owe Les Paul a great deal. Between him and Leo Fender they designed what are probably the 3 greatest guitars of all time.

Thanks VS, I'll have a celebration strum myself (ooer)

And Leo Fender didn't even play did he Martin - how did he do it? Out of all models, for me the SGs are the most playable - love 'em.