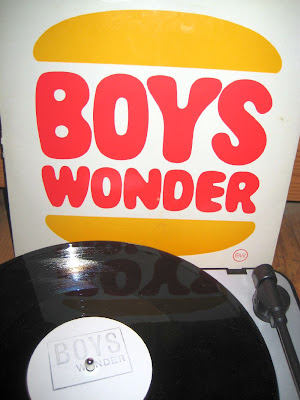 After only a handful of singles Boys Wonder made a stylistic switcheroo, trading in the Clockwork Mod clobber and space-punk sounds for shuffling dance drums, choppy house-style piano patterns and wah guitar riffs - along with a new wardrobe of long sleeve tees and British knights trainers. The Boys Wonder version 2 tunes were bubblegum with muscle. Cut and pastiche pop, borrowing from soundtracks, TV ads, other bands lyrics, horn riffs and guitar parts or rebranding corporate logos into Boys Wonder designs.

While other indie-kids were making woeful Mini-Morrisey moans, dressing in black DMs and floppy bobs, Boys Wonder were preempting the indie/dance crossover and Brit pop's cocky posturing. By the time the rest of the runners and riders had finally caught up, the trail had gone cold and the brothers Addison had moved onto Anglo-flavoured acid jazz (several steps ahead of the mid-90s lounge revival). But that's another tale for another time.

The first two tracks are from the Radio Wonder mini album. The third is ripped from the extremely limited white label only release of Keep It Up

Boys Wonder - What Makes You So Good


If the guitar riff sounds famil' - lend an ear to this

Boys Wonder - Eat Me, Drink Me


If the horn riff sounds famil' - lend an ear to this

Oh God! Watching the audiance in that video reminded me of Magic Ship's gigs! ;)

holy shit- have never heard this ever before- incredible stuff! Thank you.

Takes me back. I saw them live supporting Twenty Flight Rockers back in about 86 or 87. Dingwalls. Packed and sweaty

Never heard of them. But I like what I hear. Thanks Mondo

Moustaches and cauliflower perms? Could be a look for your new band perhaps Col?

Gigs were stormers weren't they Simon - with Crosstown Traffic and Self Preservation Society covers in the set. Did you ever see them as Corduroy - just as funky

Sadly not one of my unreleased faves Come On Love though

Ha! I'd forgotten about them. They've got that distinctive drum sound though that was all over records back in them days...

I definitely prefer Corduroy though.

They put me in mind of Pimlico (Andy Lewis' mob). Looking for Jim'll Fix It badges on bands guitars in the 80s is like looking for Harry Hill's Knitted Character.

Pure quality Mondo... You know I'm a bugger for em!

There were some absolute cracking tracks, that they only ever did live, which is a real shame.

Remember 'All Because The Ladty Loves Me' which was based around the riff of the Milk Tray advert? marvelous stuff!

What a stonking band Boys Wonder were. Spent many a drunken evening with Piley watching this lot (NE London Poly Students Union springs particularly to mind) (Watch out for that flight of steps Piley).

I loved their style and bravado and their ability to just have a darn good time.

Viva Boys Wonder. Without you there would have been no Brit-Pop.

I like the high-kicking camp of BW, but Corduroy were equally walloping Cocktails. I saw Corduroy on a double bill with Mother Earth - worra gig!

Don't think I know Pimlico John, will check out and those Varga girls stickers are pure Steve Jones

Remember that one P, and Take Me To Your Leader - haven't you got some rarities in your stash? Remember the legendary 'pile o'snags' ULU gig..

Check out Andy Lewis and Pimlico. Spearmint, Blow Up, Weller - it's all here.

Indeedy - i've got a whole C90 tape choc full of unreleased studio gems... given to me by Great Scott himself! What a guy!

I know Blow Up really well John (even did a bit DJing there one night) - but will Check Pimlico..

Get they tunes blogged P - Come On Love (the song, not you) and Hot Rod need to be aired and shared..

Much more livelier than Morrisey, for sure. In fact, I can see their place in the Britpop evolution chart:

Nice trip down memory lane mate, I must admit I never decided if they were any good or not as I was totally smashed every time I saw them !

Am I right in thinking the bass player (the guy who used to chew a lot) was in Doctor and the Medics ?

They were just too ahead of their time, Istv - there are few other reworked logos Budweiser, Warner Brothersin the collection - you can catch a peep at some here Istv

That's the thing you, me, Marm and Piley were all totally loaded at most gigs and must have missed the best bits - and yes matey on the bass was him from The Medics

Great stuff!
I have most of Corduroy's albums and 12"s (even the tragic drum n' bass effort they did with Rob Playford - I'm sure he won't mind me saying! as he's done some great work with other artists - 3 Bad Mice etc)
I have never heard these tracks before - you are a genius! (It would be great if your mate Piley could put their unreleased studio stuff onto mp3's??)
I went to their reunion gig a few years ago at the Jazz Cafe - It was brilliant! (Although no tracks from 'The New You' album on the night I was there (which was a shame)
Check out my sounds, It's great to see you are still keeping up the funky grooves!!

Brilliant! first time I have heard these tunes. More on their website http://www.boyswonder.co.uk/records.html. As an update they are playing with a mate of mine Rob in a band called The Moment (another 80s mod revival band) although the music they play now has moved on but is still very interesting. Their new tune should be on the Fred Perry website within the next month. Enjoy and thans for the soundbites.