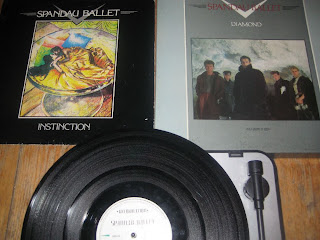 To round off our run of 80s retromania - I'm pitching in two tricky-to-track down 12"ers, both of which I believe are still unavailable in a digital format..

Until they started punting out a run of soapy soul from True onwards - Schpandau Ballet (as Tommy Vance inisted on calling them) were achingly hip and always several beats ahead of the trend-pretenders: kilts, black leather, checks and corduroy - literally new looks for every release..without the assisted swish of a stylist...

So two curiosities from the catalogue then..

A Richard James Burgess remix (that'll be him from Landscape)  found only on the flipside of the Instinction 12" or the Diamond box set, more on that in a mo' - one of the few alt-versions I remember hearing in a club and sounding impossibly now-wave (see also ABC's white label, the Human League's Love and Dancing mix of Love Action and most Soft Cell 12"-ers)

Finally a spin of the under-played poppet that is...

I had a huge dislike for most New Romantics, style over substance.

But it was the best laugh EVER, Drew! We all KNEW we were being pretentious knobs - that was part of the grin. If you want further proof, and it sounds like you don't, check out the 'Paint Me Down' video - hilarious even at the time (AND the BBC banned it!).

The early singles were great electropop and even better on the extended mixes - Glow, The freeze..

As ISB says - it was all very tongue in cheek, and digging about the dressing up box. The clubs had cracking playlists spinning everything from Bowie and Bauhaus to Louis Jordan (There Ain't Nobody Here But Us Chickens) Disney soundtracks (King of the Swingers)to The Cramps and Billy Briggs - Chew Tobacco Rag

I think their is a bit of revisionism going on here ISB, from what I can remember New Romantics took themselves very seriously and in no way was it tongue in cheek. I may be wrong but that is how us non scensters saw it.

My school was just around the corner from the London School Of Fashion, where there were quite a few people from the scene, and our art department was also a place where quite a few people were hanging out. Don't ask me why, I was only eleven! But they were all Blitz kids, and the zoot suit end as well - Blue Rondo for instance, two of them taught me to draw. And from what I can remember they took themselves a lot less seriously than other fashion/scenes I saw.

I always had a soft spot for The Ballet. Any band who had a bigger dressing up box than Alice Cooper was alright in my book.

Hmm, I'm with Drew here, can't stand Spandau. Must have been a London thing.

Most New Romantics were out for dressing up and a tear up - much the same as any other teen cult. Although certain sections - mostly avid Japan fans or Numanoids, could attract humorless bores..

In the same way at my art college, the fashion lot were a properly sniffy ol' bunch

Speaking for myself I just liked synthesisers and dressing up a bit. Some bands have attracted humourless bores throughout the history of music. Joy Division, Magazine and Bauhaus are the first three bands from this era that spring to mind. That’s without thinking about it too much and certainly not a criticism of the bands.

P.S. I also like the True LP and even parts of Parade.

'Instinction'. Pah. It's not even a proper word!

Davyh is quite right about 'instinction'. That much is true...

As far as the 'pompetous' debate goes, though, didn't it turn out that Steve Miller was saying 'the properties of love', not 'the pompetous'? Though I do quite like 'pompetous'. And I never worked out who 'Maurice' was.