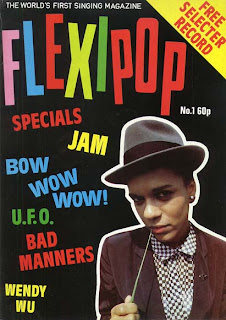 Flexipop one of the greatest pop mag's ever - you can catch an interview with its inventor Barry Cain here..
Following on from Friday's guest blog-spot, I've picked a few tunes from Matt Rudd's Q the 80s playlist for scanning with a wily eye. The full rundown and reveal of Matt's Sunday evening show can be found by tuning in here.

The Ginger/Beard Theory: much like beards are now the musical shorthand for alt, edge and earthy honesty - ginger glints (or Caribbean Sunset as I believe it's currently called) were used as a similar indicator of non-production line pop during the 80s.. thumb through this selection and you'll see what I mean.

When someone invents Grange Hill - The Musical *copyrights idea* This Nutty Boys anthem would have to be the end of show spectacular - it's like a fun size Willy Russel's Our Day Out expressed through the medium of Blockheads influenced North London Ska..

Kajagoogoo - Ooh To Be Ah
Harmless but hopeless weren't they - a Happy Shopper Duran Duran you could say. Nick Beggs (bass) was like Orville the Duck meets Mark King. And don't get me started on the sacrilegous use of Lord Harold of Lloyd for this sleeve.
Spot the ginge: a double whammy - ye olde perma-grinner on drums and ermm that other one 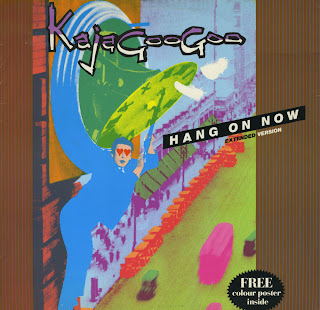 Bronski Beat - Tell Me why
It is the taste of snakebites and the smell of dry ice and poppers (what was the variety that didn't give you a raging micro-headache though), with horns that sound re-purposed from Heaven 17's Height of the Fighting. Although The liveliest version of Why is the 12" and can be found on the Hundreds and Thousands album. I spotted Mr Bronski snooping around Forbidden Planet 2 in the summer of 84 you know.
Spot the ginge:  wee Jimmy somerville

Duran Duran - Save A Prayer
Pre-dating the 90s Pan Pipe buzz - Prayer is the sound of a jacuzzi/infinity pool scored for glossy 80s fop-music. Has this been sampled by a rap or chill type remixer - it should be. Better yet, Le Bon has reigned in his signature honk for this bubbling tooty-fluter. Pop Quiz: do you know what the Sex Pistols/Duran link is ?
Spot the ginge: vacuum packed cheeks and pouting like a champ - it's Nick Rhodes. Although several Duranies did strawberry blonde variations

Sputnik were the New York Dolls of the 80s: clockwork rockers in fright-wigs and high heels doing video game glam, double drums and Rollerball bass with rockabilly riffing - what's not to like? The most exciting thing since the Pistols - if you were there at the time (and liked the Pistols and Sputnik at the time). The explosivest Love Missile Remix can be found on the rare Video Edition 12"  (see below). The $ci-Fi $ex $tars scarcity is also worth a squint. Did you know Bowie covered Love Missile - grab at the bottom of this post..
Spot the ginge: Degville's Clockwork Orange outsize syrups 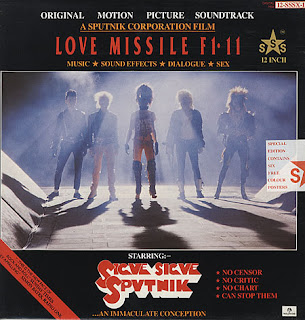 Wham!  - Wham Rap (Enjoy What You Do)
Got this on 12" (Inner Vision label) - bought Sept 82, after a holiday in the south of France, camping with two mates..Dave Wright (you'll spot his name on the Dear Diary entries) and Kurt (now the headmaster of a local private school). Some joker had apparently nicked most of the campsite's record collection, meaning the DJ in residence was restricted to playing the exact same set every night - 'You set could your watch by it' I remember someone saying.
For those who haven't heard -  I experienced the most spectacular moment of hi concentrated-campness  in the summer of 83, while meeting George Michael, Paul Gambacinni, Leee John and Limahl in the cocktail bar of the Camden Palace.  Leee John and Limahl were furiously trying to out swish each other, George Michael sulked at the bar and Boy George and Marc Almond were downstairs. Rusty Egan DJ'd and Steve Strange MC'd - Now that's what I call the 80s

OMD - Messages
Much better than I remembered atually, but I can't forgive Andy McWhatnot for that dire dancing - it's woeful. Like a new born deer trying to steady it's creasing knees. Only out-skittered by the those two guitar twits from the fine young cannibals. Electricity for me remains their finest moment

Eurythmics - Love Is A Stranger
Is it me, or does she really sing 'so it's circumcision' - and why is Professor Wilf Lunn moonlighting as a chauffer?
Spot the ginge: Annie Lennox reworking Bowie's Man Who Fell to Earth wardrobe

AC/DC  - Rock n Roll Ain't Noise Pollution
R.O.C.K. The riffs have been lifted by bootleg remixers and hip-hoppers, the songs now soundtrack almost every action film - you literally can't argue with that. Surely they're due for a Bond theme soon (or perhaps Goldfrapp)? It's the sound of a Ray Harryhausen Dino-fight re-rendered as hi-volume wallop and flat capped throat shredding..


Lead off single from Undercover - the album that gets an unjust kicking in the catalogue  (Dirty Work is the deepest the Stones ever dipped) - Undercover of the Night is all hoodlum guitar,  voodoo rhythms, pulse pumping drums and a banned Julian Temple vid - still keeping naughty into their fourties. Good work Stoners..

I went to Alton Towers somewhere in the 80's to watch them film a game show produced there called 'Hold Tight', it was a bit like a huge snakes & ladders game in a cage type thingy? Anyway, Kajagoogoo were performing the week I went which was a huge disappointment as I thought I was getting The Thompson Twins! Its hard being a teenager. On the plus side Bob Carolgees and Spit the dog were presenting, yeah.

Did you do the Corkscrew - I've got a certificate for it. I don't remember 'Hold Tight' - how about On Safari with Biggins and Gillian Taylforth. Or Razzmatazz with Alistair Pirrie and Lisa Stansfield?

There's another one for my ginger theory: The Thompson Twins - Tom whatshisname!

I vaguely remember a Tube special late one Friday night with that Stones video being aired.

Never ever bought FlexiPop as I had a very low regard for flexi discs, they fucked up your needle bi style.

Hard to imagine UFO being suitable fodder for Flexipop; they shared a bass player with your beloved Damned and Love's Alone Again Or.

Evokes a millions memories and just as many rumours (the one about Gambo and Limahl being 'found' in a lift at the BBC comes to mind first.).

Wee Jimmy Somerville seems to live round these part now as I saw him in the greengrocer's last week (he couldn't have got much further away from Scotland within the UK). He looks better as a fortysomething that he did as a youngster - his was a face not made for youth.

And I only stopped getting mistaken for Shirlie from Wham! about five years ago, when I grew my hair.

Flexipop was fantastic, though it DID mess up your stylus. We've got a few in the loft somewhere, though they may have perished into a pile of slime by now.

And 'On Safari' was compulsory viewing when we were students with far too much time on our hands. It went with Danger Mouse and Blockbusters, for a perfect afternoon's viewing. Happy days...

Yeah - that's it Drew a late night showing, I'm sure they did the same for Michael Jackson's Thriller and a couple of others (Frankie's Relax?)..

I'm with you on the Bowie cover (only here for curiosity value).. it's lifeless - his career history is pretty poor when it comes to covers though - but his See Emily Play works..

And don't forget J, Paul Grey was also a Hot Rodder. I met him at the Sensible gig. Fingers crossed he may be up for a blog spot at some point..That's the great thing about Flexipop anything went Motorhead, Heaven 17, The Damned photo-stories (Rat Van Winkle)..Don't forget to check Mr Flexipop's (Barry Cain) pop and punk stories here. A gem..

Were you not tempted to tap little Jimmy on the shoulder and ask about the him and Marc Almond rumors..Dig about ISB, the Ants and Soft Cell editions are hugely collectible - the Nick Heyward one (Nobody's Fool Demo) is a treat..

There's a follow up due soon (ish)to Barry's 77 Sulphate Strip covering his Flexi years. FB me for all the info..

If you want dodgy/interesting Bowie covers, then his version of Alabama Song is on this week's show...!

Lovely stuff! Did you know that Love Missile was 25 years old last week??! How can that be??? TWENTY FIVE YEARS!!

Got a Soft Cell flexipop flexi disc in the collection, although as ISBW points out, it never ever gets a play, as they played havoc with your stylus.

There you go Matt - more muscle for me Bowie Does Crap Covers theory. Although chatting with someone who's very Q the 80s last night- agreed Round and Round is one of Bowie's finest refits..(although that's because of Mick Ronson)

Dig about on Youtube P - they're all on there..

Cheers for the Bowie cover, M - I had a copy from my dial-up internet days, but it was sadly incomplete :-(

The existence of a mag like 'Flexipop' fascinates me - does anyone know if the discs are online anywhere?