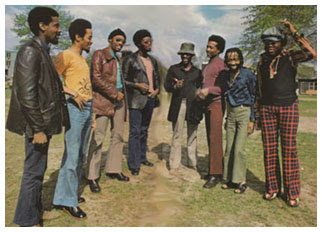 It's the return of the Roman Empress aka Suzy Norman. Previously Suzy posted a spectacular entry on the motif of 'he' fronted songs with enhanced oomph from 'she' backing vocalists - although this was blog-whacked by the DMCA meanies some while back.. Typically you'll find Suzy parked up at Queen Margot and the Supper Club or twittering hereabouts @suzynorman  - today however, she bring us the breakdown on shoulda-been-bigger Brit-funkateers Cymande pronounced (sah-mahn-day)

Not enough people have heard 70s band Cymande and that's a shame but there's a few reasons why they haven't. Here's the rub – they're difficult to categorise.

They're funk - not from America (where funk thrived) - they're British (British West Indian). They're not reggae or dub, so they weren't likely to be chart fodder (as reggae was in the UK) or even play down the speakers as The Clash prepared themselves backstage (The Clash often warmed up the crowd with dub).

So how would they fit into the British contemporary scene? Where Sly and The Family Stone stormed America, our funk outfit - just as good, skimmed under the radar. The band who describe their music as “nyeh-rock” spent years trudging venues in London to unspectacular avail but America welcomed them.

So, the fact that America was more funk-orientated than here aside, why is it that they went down so well over there but not here? A big factor is that in the states they had Bob Schwaid behind them (also responsible for pushing Al Green and he was a member of the production-management team of Astral Weeks). In short, they had good promotion.

Says John Schroeder: “Philly had got 'The Message' and went wild for Cymande.”

Back in Soho, Schroeder rescued them from being a rambling assortment of musicians and hangers-on with great potential, to a well-produced outfit. Originally there to see a band that cancelled, he saw something that night he felt sure could be great with a bit of development. Initially finding the band unfocussed and without a clear inner-management structure, he had
concerns.

The working relationship was problematic, not least because of the lack of a clear vocal presence (they swapped singers on numerous occasions) but nonetheless he picked three tracks from the wreckage and polished them up in a Dean Street Studio. This was the beginning for them, although not in Britain and a short-lived American reception - one of rapture, didn't remunerate for many, many years.

Eventually, due to sampling they made some money but in their day they were only a going concern for a few years and by 1974 they disbanded. Much later on they were sampled by knowledgeable and appreciative musicians: 'Dove' was used as the thread in The Fugees' The Score, Def Jef's Give It Here pads out its scratching and rapping with 'Bra' and King Tee launches straight into the smooth groove of 'The Message', using it throughout his short number, On Tha Rox.

In the words of Malachi Trout: 'Underplayed and underrated though they were, Cymande had got 'it'!' And as a newspaper headline crowed: 'Our loss was America's gain' - but only for a time. They were a smooth, accomplished and well-produced motley crew of individuals waiting for that all-important recognition. Deserving the limited but eager reception they did receive, they just tasted it too fleetingly.

See for yourself. Here's 'Brothers On The Slide' from the Renegades of Funk album: 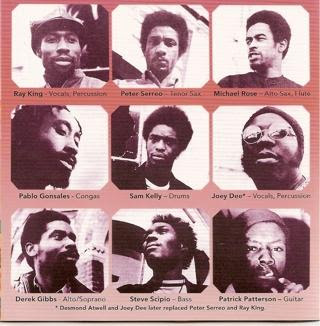 As a bloggy bonus - you can grab Cymande's The Message as part of Soundhog's booty remix - here
Posted by Mondo at 7:12 AM

Love the riff. And I'm not the only one!

I don't why I've had such a Cymande blind-spot for so long..

Never heard this before. Great stuff.

Suzy Suzy Suzy, ta for this, I'd heard of them but never listened. Nice guest spot!

Great stuff - thanks for introducing me to these

Thanks guys. A pleasure to spread 'the message'!

Yes - all new to me too, Suzy where would you recommend starting?

Just buy 'the message' Mondo. It's got everything they ever did on it.

Never heard of these blokes before! Top quality stuff, thanks very much.

Cheers ISBW. The Idiot Bastard Band played some Cymande before coming on stage last night in Clerkenwell. That's the first time I've heard them in public! Little things like this excite me far too much!

Great post, and great track! I'm a fan of Cymande, and your blog. We should link blogs: I'm at soulexcursions.blogspot.com