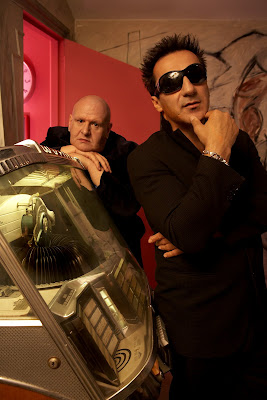 The 333 Mother Club is not in anyway your typical run of the mill rock venue. The DJ picks 'n' mixes hits and obscurities from Johnny Ray belters to Mark Vidler booties. There's no stage. The room seems to be scattered with lost property oddities - umbrellas, dress maker's mannequins, Chestfield chairs and has the buzz of a bordello disco set dressed by The Munsters - all of which make it the perfect prowling ground for The Wolfmen.

After Molloy's electropoppingindiedisco(more on them soon) and Space Age sitar from Bishi , The Wolfmen were up and at 'em, flooring it from the off and coming at the crowd like greyhounds out of a trap - ripping straight into 'Needles In The Camel's Eye', 'Jackie Says' ,'Cecile' and showing off shiny new tunes like 'Better Days' (a ready made summer single if ever there was one) and 'Whack That Bass' from the due soon album 'Modernity Killed Everynight'. Aside from Eno's 'Needles', other covers included a pre Velvet's Lou Reed track 'Do The Ostrich' (as featured in The Word recently) and a Bollywood Burlesque meets Biker Bar remake/remodel of 'Silver Machine' when Bishi joined The Wolfmen to add some slinky sitar trims to the Space Rock classic.

Despite a monthly residency I haven't seen The Wolfmen in action since their debut gig last November, and this experience was more of an all out 'needles in the red' rocker than the Wolf Gang's first show, with a fistful tunes that compounded the stomp of Glam, the power of Punk and the sugary hooks of Hitsville U.S.A into a bundle as tight and tough as Bruce Lee's 'one inch punch'.

So, see you there next month - same Wolf-time same Wolf-channel.

The Wolfmen - 'Do the Ostritch'

The Wolfmen on MySpace
Posted by Mondo at 4:06 PM

Sounds like a stormer Mondo... Can't believe I couldn't make it once again. Next month it it - see you there!! Is it the same venue?

I recognise the wolfman on the right - the one with hair should I say...and yes - an absolute stormer - I will try and make it if next month again.

It was aN absloute meltdown belter, and I'm all revved up and ready for the next round - keep on eye on The Wolfmen's MySpace site, for dates and details.

RE - The Wolfman on the right is Chris Constantinou (formerly known as Chris De Niro)and also one of Adam's Ants from the 'Goody Two Shoes' to 'Apollo 9' period (including Live Aid) you can see him here, - he was playing this very same black bass last Friday..

The Cecile track sounds very Lou Reed/ VU. I like. Well, I do enjoy a dark band live, so I'll don my black eyeliner if we get invited again.

Blimey, it'll be a Blogspot reunion with guest band...

"Sorry boys, me dad wants to put the car in the garage..."

Thanks for the Link on my blog