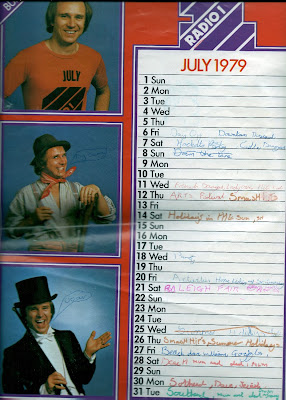 Picking up where we left off then - what news does July bring?

Days off, larks with French Bangers and beach trips. But the terrifying highlight (fright-light?) takes place at the Rayleigh fair (21st - check the doodle) with a spin on a madly mysterious ride that I've never seen since.

How can you describe it? Imagine church pew seating, suspended garden swing style from a supporting frame. Position this inside a giant octagonal tombola cover of alternating coloured panels. As the communal seat is pulled back, the cover is spun fowards, creating a whirling illusion of increasingly, hight-tilting seats - until the angle begins to feel impossibly steep.

It may sound simple but it's a ride of such eye-widening, giddy terror that I've never forgotten it. Neither I'll bet have bleached jeans and bull-necked boneheads or spikes 'n' studs punks in the front pews who screamed like piglets and flung themselves to the floor as an escape from tumbling into the 'void'

I've found out it's something based on the haunted swing principle, a ride that seems to have slipped out of circulation since.

Chart-wise July looked like this (Thom Pace though - who he?) with singles snapped up being... 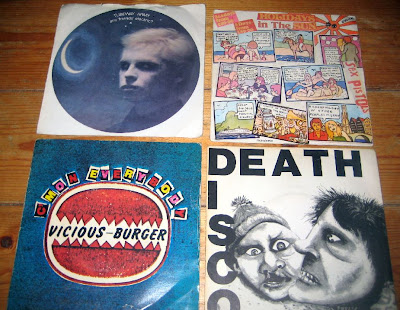 So what shall we spin? How about something punk(ish) and something disco(ish) as that seems be the mood of the month. Aged 13, clocking Sid Vicous riding about in a motorbike jacket, no helmet, no shirt and padlock 'n' studs bling was possibly the coolest thing I'd ever seen. Ps it's a Rabbit padlock available here if you're tempted

I was listening to the Patrick Hernandez track a few weeks ago. Punk and new wave doesn't take me back in quite the same way as disco. I can see my Star Wars toys, and Doctor Who comics, and smell school when I hear that track.

Did you ever have a ride called The Wall which involved standing up against the mesh perimeter of a sort of bowl that lifted and span at 180 degrees, holding you in only through the wonders of centrifugal force? They screamed like piglets on that one too.

I've just looked up 'camp' on Wiki and it says it's 'an aesthetic sensibility wherein something is appealing because of its bad taste and ironic value'; I reckon these are two of the campest records you've ever posted.

I was never really a diary type Simon, but somehow this calendar ended up becoming one (an early versh of blogging I suppose) - Patrick Hernandez makes me think of our local park and a Hernandez-a-like, Nigel Jones who knew all the words and moves. Funny bloke.

Here you go Davy - it's called the Meteorite
apparently. I first saw one in '81 (ELO's Hold On Tight was the fairground anthem of the time) when someone was sick and it sprayed around the other riders. Surely Sid and Patrick don't out swish these two camp-o-meter busters..

PS. Mrs M and I were chatting about Ferris Wheels a couple nights ago, and how in the Health and Safety free 70's/80s - the only preventative measure to stop you slipping to a certain and splatty death - was a flimsy, slippery metal rod across your lap *shudders*

The first (and last) time I took Mrs H on a big wheel she clutched that slippery metal rod (and me) and sobbed uncontrollably all the way around.

When we got off the 'barker' chappie, clearly a master of the understatement, said 'We won't be seeing you again then'.

That fair ride you describe Mondo sounds truly terrifying!
How on earth did you stay on it?

I would make a beeline for the ride that davy h mentioned every year, what a thrilling ride...

Hi Mondo.
They still have that ride at sunny Blackpool, Alton Towers also has their own spooky version called Hex which gives that odd sensation that your head is going to hit the deck wayyyy before your feet ever do!

I hated big wheels Davy - mainly because I always ended up with some nutter-mate who would rock the carriage like crazy. The last ride Mrs M and I went on was the Big One at Blackpool. Terrifying! She was 6 weeks pregnant at the time and I'm convinced all that high-speed tossing and turning was why our eldest was born breech.

It was all an optical illusion Lil, the seats just rocked backwards and forwards - but the motion of the spinning cover gave every back-swing the appearance of a room falling forwards .


Hey ho Jacqui - I came across a mention of The Hex while digging about for info on my mystery ride.
Although I haven't been to Alton Towers since the Corkscrew first opened. Have you tried the Big One at Blackpool they pull a low trick of making it seem like your forehead is going to slam into the tunnel entrance - before safely dipping at the last moment.

Since we had to postpone our holiday to the Isle of Wight by two days after being spun to death on the waltzer at the fair in 1979, I'm unable to go on anything that goes round. I know your pain.

After seeing That'll Be The Day I couldn't walk 'round a fairground without scoping all the Starkey/Essex types. Even from a young age you could see the scams a mile off.

by george indeed. what an orrible lot to be forced to look at all month those radio oners were. i'll take a scary fairground ride over those three any day.

and that record pile hardly looks like like radio one faves neither. you little punk rocker you
x

Yes..the Big One is a shady character!
I'm yet to try the new Thirteen at Alton Towers, did you know they sell 'plastic pants' in the Thirteen gift shop? blimey.

This was the year I turned from pop to punk fan Ally, but had to wait a year before getting the real-deal clobber...

Have they called it Thirteen to ramp up the terror for superstitious types? Trophy pants or not - you wouldn't get me back on anything like that now.

PS - when/why did they phase out Goldfish at fun fairs?

We still get goldfish at the fair here...still have one slippery survivor from 7 years ago!
Goldfish fact..
"The world's oldest recorded goldfish was 43 years old. Which is just amazing for almost any pet really, and he did very well considering he was won at a town fair. His name was Tish, and he died in 1999 in North Yorkshire, UK."
Just another 36 years to go then.

I was out near Rayleigh last weekend for someone's birthday - Essex is weird. More little wooden houses than I expected.

It takes a lot of peer pressure to get me on any fairground rides. You can see that big rollercoaster in Blackpool forty miles away - I honestly think if I went on it I'd have a heart attack.

never been crazy about mad funfair rides. Think me always being taller than average didn't help... never fitted in seats and stuff that well, and belts, buckles and all other safety stuff never fitter where it ought.

Incredible I never knew the ol' goldies were so hardcore!

Rayleigh - Hurrah! That's Piley and Mine's old stomping ground Artog, well the site of Crocs/Pink Toothbrush. If you head to the country it goes all Lovejoy, if you stick by the Thames it can be Eastenders on Sea. I do remember thinking on the Big One 'If I can see Wales from here - it's gotta be a long drop down '.

Do you remember that nutty ol' squash-face bloke operating a ride on Clacton Pier P - I've got a picture somewhere..

As I said earlier, when Ringo paired up with David Essex they revealed the more menacing side of working the fair. Essex would return to the fairground motif time and again.

Do i remember of squash face??! I got pics of him too... they dont make em like that anymore...

You missed a good night out tonight fella!

Do you remember the Rotor, which was a big woooden drum, positioned inside another structure about 10 feet above the ground.

Room for up to 15 or so to stand around, backs to the wall, no harness, or cage. Then the drum started spinning round fast enough to have you sticking to the wall. Think old style top loading washing machine, or rinser/spinner.

As the centrifugal (or is it centripetal?) force became stronger than gravity, the floor dropped away into blackness, and after letting you see this, the lights went out, leaving you stuck to the wall, disorientated and either amused, mildly perturbed or plain old terrified.

They had one off the fairgrounds installed at Wicksteed Park many years ago. I used to work on it. Many magic moments.

You worked on an actual fairground OP? There's got to be a blog-bit in that surely. Give us the goss' on fiddles and tales...

I remember that centrifugal thing at the Kursaal in Southend from way back. It was terrifying to watch, let alone set foot (or not) on.

Very pleased to see that you started the summer holidays in perfect fashion with two consecutive days on the beach (baby). Sounds perfect....

Ooooh, only just seen this, the exact month of my birth!!! Lovely :)